labor ALEC at 40: Turning Back the Clock on Prosperity and Progress

Today, the Center for Media and Democracy (CMD) released a new report: "ALEC at 40: Turning Back the Clock on Prosperity and Progress." The report identifies and analyzes 466 American Legislative Exchange Council (ALEC) bills introduced in 2013.

August 9, 2013 PRW Staff Center for Medai and Democracy
Printer friendly
ALEC at 40: Turning Back the Clock on Prosperity and Progress Published August 9, 2013 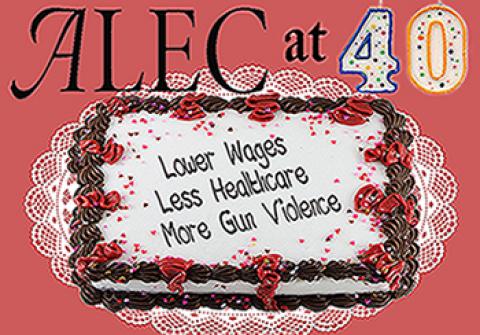 ALEC at 40: Turning Back the Clock on Prosperity and Progress
Readers Comments

Today, the Center for Media and Democracy (CMD) released a new report: "ALEC at 40: Turning Back the Clock on Prosperity and Progress." The report identifies and analyzes 466 American Legislative Exchange Council (ALEC) bills introduced in 2013.

This week, ALEC celebrates its 40th anniversary in Chicago. At this meeting -- as in all ALEC meetings -- lobbyists from U.S. and foreign corporations will vote as equals alongside state legislators to adopt ALEC "model" bills, which then will be distributed nationwide with little or no disclosure of their ALEC roots.

In 2013, ALEC is going to new lengths to hide its lobbying of legislators from the public eye. It has taken to stamping all its documents as exempt from state public records laws, dodging open records with a "dropbox" website, and other tricks. After Watergate, many states strengthened their laws regarding open meetings and open records, but real sunshine on government is anathema to ALEC.

"When ALEC was born, Richard Nixon was president. Gasoline was 40 cents a gallon and the minimum wage was $1.60 an hour. Forty years later, ALEC legislators seem to be hankering for this bygone era, pursuing an agenda to roll back renewables, expand the use of fossil fuels, and suppress wages and benefits for even the lowest paid American workers," says CMD Director of Research Nick Surgey.

In this report, the CMD identifies 466 ALEC "model" bills introduced in 2013, but pursuing a retrograde agenda.

CMD identified 466 ALEC bills from the 2013 session. 84 of these passed and became law. ALEC bills were introduced in all 50 states and the District of Columbia in 2013. The top ALEC states were West Virginia (25 bills) and Missouri (21 bills).

CMD identified 117 ALEC bills that affect wages and worker rights. 14 of these became law. These bills included so-called "Right to Work" legislation, part of the ALEC agenda since at least 1979, introduced in 15 states this year. Other bills would preempt local living or minimum wage ordinances, facilitate the privatization of public services, scrap defined benefit pension plans, or undermine the ability of unions to organize to protect workers.

CMD identified 139 ALEC bills that affect public education. 31 of these became law. Just seven states did not have an ALEC education bill introduced this year. Among other things, these bills would siphon taxpayer money from the public education system to benefit for-profit private schools, including the "Great Schools Tax Credit Act," introduced in 10 states.

CMD identified 77 ALEC bills that advance a polluter agenda. 17 of these became law. Numerous ALEC "model" bills were introduced that promote a fossil fuel and fracking agenda and undermine environmental regulations. The "Electricity Freedom Act," which would repeal state renewable portfolio standards, was introduced in six states this year.

CMD identified 71 ALEC bills narrowing citizen access to the courts. 14 of these became law. These bills cap damages, limit corporate liability, or otherwise make it more difficult for citizens to hold corporations to account when their products or services result in injury or death.

CMD identified nine states that have been inspired by ALEC's "Animal and Ecological Terrorism Act" to crack down on videographers documenting abuses on factory farms. These so-called "ag-gag" bills erode First Amendment rights, and threaten the ability of journalists and investigators to pursue food safety and animal welfare investigations.

CMD identified 11 states that introduced bills to override or prevent local paid sick leave ordinances, such as the one recently enacted in New York City. At least eight of these bills were sponsored by known ALEC members. Although ALEC has not adopted a preemption bill as an official "model," ALEC member the National Restaurant Association brought a bill to override local paid sick leave ordinances to an ALEC meeting in 2011, along with a target map and other materials.

ALEC has faced increasing scrutiny since CMD launched its ALEC Exposed project in July 2011, making the entire ALEC library of more than 800 "model" bills publicly available for the first time. Since then, groups including Color of Change, Common Cause, Progress Now, People for the American Way, the Voters Legislative Transparency Project, and others have put ALEC in the spotlight like never before.

To date, 49 major American corporations have dumped ALEC, including some of the largest firms in the world.

Charles Morris's observations and suggestions around the question of members-only bargaining deserves close attention, followed by a full-blown discussion/debate among labor activists and friends.  He's absolutely correct about the role of minority (or, pre-majority) bargaining and representation in the expansion of organized labor in the '30s and '40s.  In addition to auto and steel, in Pennsylvania both General Electric and Hershey Foods recognized the representational rights of pre-majority unions in matters concerning the unions' members, and Hershey signed a contract with the minority represented by the hastily organized Chocolate Workers of America, CIO, Local 1 in 1937.  There are negative possibilities to be considered, of course; but the potential of such a strategy -- as recognized by SEIU, the Teamsters, the UE, CWA and others in the instances cited by Morris -- must be pursued.
Another angle of the question to be considered should be the similar issue raised by right-to-work laws and the situations that they create.  Why should unions in those environments be required to represent persons who choose to remain non-members with the expectation that members' dues should be expended upon upholding the incomes and working conditions of those who wish to be "free" of unions?  Really!
Jim Young
Professor of History, emeritus
Edinboro University