Kurt Vonnegut: The Worst Addiction of Them All

An excerpt from the new eBook Vonnegut by the Dozen: Twelve Pieces by Kurt Vonnegut. 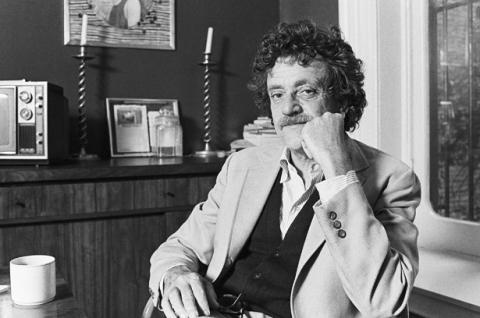 This is an excerpt from the new ebook Vonnegut by the Dozen: Twelve Pieces by Kurt Vonnegut, a collection of essays and articles published in The Nation. The eBook is now available on tablets, smartphones and computers—download yours today.

What has been America's most nurturing contribution to the culture of this planet so far? Many would say Jazz. I, who love jazz, will say this instead: Alcoholics Anonymous.

I am not an alcoholic. If I was, I would go before the nearest A.A. meeting and say, "My name is Kurt Vonnegut. I am an alcoholic." God willing, that might be my first step down the long, hard road back to sobriety.

The A.A. scheme, which requires a confession like that, is the first to have any measurable success in dealing with the tendency of some human beings, perhaps 10 percent of any population sample anyone might care to choose, to become addicted to substances that give them brief spasms of pleasure but in the long term transmute their lives and the lives of those around them into ultimate ghastliness.

The A.A. scheme, which, again, can work only if the addicts regularly admit that this or that chemical is poisonous to them, is now proving its effectiveness with compulsive gamblers, who are not dependent on chemicals from a distillery or a pharmaceutical laboratory. This is no paradox. Gamblers, In effect, manufacture their own dangerous substances. God help them, they produce chemicals that elate them whenever they place a bet on simply anything.

Whether I was standing before a meeting of Gamblers Anonymous or Alcoholics Anonymous, I would be encouraged to testify as to how the chemicals I had generated within myself or swallowed had alienated my friends and relatives, cost me jobs and houses and deprived me of my last shred of self-respect.

Not every member of A.A. or G.A. has sunk quite that low, of course--but plenty have. Many, If not most, have done what they call "hitting bottom" before admitting what it is that has been ruining their lives.

I now wish to call attention to another form of addiction, which has not been previously identified. It is more like gambling than drinking, since the people afflicted are ravenous for situations that will cause their bodies to release exciting chemicals into their bloodstreams. I am persuaded that there are among us people who are tragically hooked on preparations for war.

Tell people with that disease that war is coming and we have to get ready for it, and for a few minutes there, they will be as happy as a drunk with his martini breakfast or a compulsive gambler with his paycheck bet on the Super Bowl.

Let us recognize how sick such people are. From now on, when a national leader, or even just a neighbor, starts talking about some new weapons system which is going to cost us a mere $29 billion, we should speak up. We should say something on the order of, "Honest to God, I couldn't be sorrier for you if I'd seen you wash down a fistful of black, beauties with a pint of Southern Comfort."

I mean it. I am not joking. Compulsive preparers for World War III, in this country or any other, are as tragically and, yes, as repulsively addicted as any stockbroker passed out with his head In a toilet in the Port Authority bus terminal.

For an alcoholic to experience a little joy, he needs maybe three ounces of grain alcohol. Alcoholics, when they are close to hitting bottom, customarily can't hold much alcohol.

If we know a compulsive gambler who is dead broke, we can probably make him happy with a dollar to bet on who can spit farther than someone else. For us to give a compulsive war-preparer a fleeting moment of happiness, we may have to buy him three Trident submarines and a hundred intercontinental ballistic missiles mounted on choo-choo trains.

If Western Civilization were a person--

If Western Civilization, which blankets the world now, as far as I can tell, were a person--

If Western Civilizations, which surely now includes the Soviet Union and China and India and Pakistan and on and on, were a person--

If Western Civilization were a person, we would be directing it to the nearest meeting of War-Preparers Anonymous. We would be telling it to stand up before the meeting and say, "My name is Western Civilization. I am a compulsive war- preparer. I have lost everything I ever cared about. I should have come here long ago. I first hit bottom in World War I." Western Civilization cannot be represented by a single person, of course, but a single explanation for the catastrophic course it has followed during this bloody century is possible. We the people, because of our ignorance of the disease, have again and again entrusted power to people we did not know were sickies.

And let us not mock them now, any more than we would mock someone with syphilis or smallpox or leprosy or yaws or typhoid fever or any of the other diseases to which the flesh is heir. All we have to do is separate them from the levers of power, I think.

And then what? Western Civilization's long, hard trip back to sobriety might begin.

A word about appeasement, something World War II, supposedly, taught us not to practice: I say to you that the world has been ruined by appeasement. Appeasement of whom? Of the Communists? Of the neo-Nazis? No! Appeasement of the compulsive war-preparers. I can scarcely name a nation that has not lost most of its freedom and wealth in attempts to appease its own addicts to preparations for war.

And there is no appeasing an addict for very long.

"I swear, man, just lay enough bread on me for twenty multiple re-entry vehicles and a fleet of B-1 bombers, and I'11 never bother you again."

Most addictions start innocently enough in childhood, under agreeable, reputable auspices-a sip of champagne at a wedding, a game af poker for matchsticks on a rainy afternoon. Compulsive war-preparers may have been encouraged as infants to clap their hands with glee at a campfire or a Fourth of July parade.

Not every child gets hooked. Not every child so tempted grows up to be a drunk or a gambler or a babbler about knocking down the incoming missiles of the Evil Empire with laser beams. When I identify the war-preparers as addicts, I am not calling for the exclusion of children from all martial celebrations. I doubt that more than one child In a hundred, having seen fireworks, for example, will become an adult who wants us to stop squandering our substance on education and health and social justice and the arts and food and shelter and clothing for the needy, and so on--who wants us to blow it all on ammunition instead.

And please understand that the addiction I have identified is to preparations for war. I repeat: to preparations for war, addiction to the thrills of de-mothballing battleships and inventing weapons systems against which there cannot possibly be a defense, supposedly, and urging the citizenry to hate this part of humanity or that one, and knocking over little governments that might aid and abet an enemy someday, and so on. I am not talking about an addiction to war itself, which is a very different matter. A compulsive preparer for war wants to go to big-time war no more than an alcoholic stockbroker wants to pass out with his head in a toilet In the Port Authority bus terminal.

Should addicts of any sort hold high office In this or any other country? Absolutely not, for their first priority will always be to satisfy their addiction, no matter how terrible the consequences may be--even to themselves.

Suppose we had an alcoholic President who still had not hit bottom and whose chief companions were drunks like himself. And suppose it were a fact, made absolutely clear to him, that if he took just one more drink, the whole planet would blow up.

So he has all the liquor thrown out of the White House, including his Aqua-Velva shaving lotion. So late at night he is terribly restless, crazy for a drink but proud of not drinking. So he opens the White House refrigerator, looking for a Tab or a Diet Pepsi, he tells himself. And there, half-hidden by a family-size jar of French's mustard, is an unopened can of Coors beer.

What do you think he'll do?

Novelist and essayist Kurt Vonnegut (1922-2007), is the author of Slaughterhouse-Five, Cat's Cradle, and Breakfast of Champions