A City Invokes Seizure Laws to Save Homes

Scarcely touched by the nation’s housing recovery and tired of waiting for federal help, Richmond is about to become the first city in the nation to try eminent domain as a way to stop foreclosures. 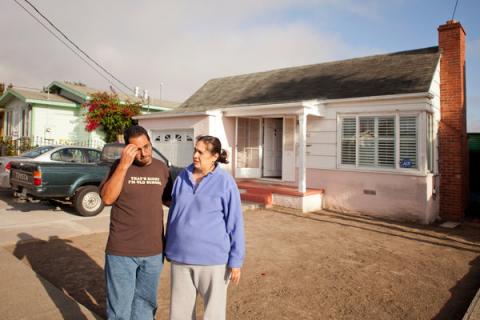 The power of eminent domain has traditionally worked against homeowners, who can be forced to sell their property to make way for a new highway or shopping mall. But now the working-class city of Richmond, Calif., hopes to use the same legal tool to help people stay right where they are.

Scarcely touched by the nation’s housing recovery and tired of waiting for federal help, Richmond is about to become the first city in the nation to try eminent domain as a way to stop foreclosures.

The results will be closely watched by both Wall Street banks, which have vigorously opposed the use of eminent domain to buy mortgages and reduce homeowner debt, and a host of cities across the country that are considering emulating Richmond.

The banks have warned that such a move will bring down a hail of lawsuits and all but halt mortgage lending in any city with the temerity to try it.

But local officials, frustrated at the lack of large-scale relief from the Obama administration, relatively free of the influence that Wall Street wields in Washington, and faced with fraying neighborhoods and a depleted middle class, are beginning to shrug off those threats.

Despite rising home prices in many parts of the country, including California, roughly half of all homeowners with mortgages in Richmond are underwater, meaning they owe more — in some cases three or four times as much more — than their home is currently worth. On Monday, the city sent a round of letters to the owners and servicers of the loans, offering to buy 626 underwater loans. In some cases, the homeowner is already behind on the payments. Others are considered to be at risk of default, mainly because home values have fallen so much that the homeowner has little incentive to keep paying.

Many cities, particularly those where minority residents were steered into predatory loans, face a situation similar to that in Richmond, which is largely black and Hispanic. About two dozen other local and state governments, including Newark, Seattle and a handful of cities in California, are looking at the eminent domain strategy, according to a count by Robert Hockett, a Cornell University law professor and one of the plan’s chief proponents. Irvington, N.J., passed a resolution supporting its use in July. North Las Vegas will consider an eminent domain proposal in August, and El Monte, Calif., is poised to act after hearing out the opposition this week.

But the cities face an uphill battle. Some have already backed off, and those that proceed will be challenged in court. After San Bernardino County dropped the idea earlier this year, a network of housing groups and unions began working to win community support and develop nonprofit alternatives to Mortgage Resolution Partners, the firm that is managing the Richmond program.

“Our local electeds can’t do this alone, they need the backup support from their constituents,” said Amy Schur, a campaign director for the national Home Defenders League. “That’s what’s been the game changer in this effort.”

Richmond is offering to buy both current and delinquent loans. To defend against the charge that irresponsible homeowners who used their homes as A.T.M.’s are being helped at the expense of investors, the first pool of 626 loans does not include any homes with large second mortgages, said Steven M. Gluckstern, the chairman of Mortgage Resolution Partners.

The city is offering to buy the loans at what it considers the fair market value. In a hypothetical example, a home mortgaged for $400,000 is now worth $200,000. The city plans to buy the loan for $160,000, or about 80 percent of the value of the home, a discount that factors in the risk of default.

Then, the city would write down the debt to $190,000 and allow the homeowner to refinance at the new amount, probably through a government program. The $30,000 difference goes to the city, the investors who put up the money to buy the loan, closing costs and M.R.P. The homeowner would go from owing twice what the home is worth to having $10,000 in equity.

All of the loans in question are tied up in what are called private label securities, meaning they were bundled and sold to private investors. Such loans are generally the most unfavorable to borrowers and the most likely to default, Mr. Gluckstern said. But they are also the most difficult to modify because they are controlled by loan servicers and trustees for the investors, not the investors themselves. If Richmond’s purchase offer is declined, the city intends to use eminent domain to condemn and buy the loans.

The banks and the real estate industry have argued that such a move would be unprecedented and unconstitutional. But Mr. Hockett says that all types of property, not just land and buildings, are subject to eminent domain if the government can show it is needed to promote the public good, in this case fighting blight and keeping communities intact. Railroad stocks, private bus companies, sports teams and even some mortgages have been subject to eminent domain.

Opponents, including the Securities Industry and Financial Markets Association, the American Bankers Association, the National Association of Realtors and some big investors have mounted a concerted opposition campaign on multiple levels, including flying lobbyists to California city halls and pressuring Fannie Mae, Freddie Mac and the Federal Housing Administration to use their control of the mortgage industry to ban the practice.

Tim Cameron, the head of Sifma’s Asset Management Group, said any city using eminent domain would make borrowing more expensive for everyone in the community and divert profits from the investors who now own the loan to M.R.P. and the investors financing the new program. “Eminent domain is used for roads and schools and bridges that benefit an entire community, not something that cherry-picks who the winners are and who the losers are,” he said.

Representative John Campbell, Republican of California, has introduced a bill that would prohibit Fannie, Freddie and the F.H.A. from making, guaranteeing or insuring a mortgage in any community that has used eminent domain in this way. Eminent domain supporters say such limits would constitute a throwback to the illegal practice called redlining, when banks refused to lend in minority communities.

Opponents have also employed hardball tactics. In North Las Vegas, a mass mailer paid for by real estate brokers warned that M.R.P. had “hatched a plan to make millions of dollars by foreclosing on homeowners who are current on their payments.”

In a letter to the Justice Department, Lt. Gov. Gavin Newsom of California complained that the opposition was violating antitrust laws and that one unnamed hedge fund had threatened an investor in the project.

But not all mortgage investors oppose the plan. Some have long argued that writing down homeowner debt makes sense in many cases. “This is not the first choice, but it’s rapidly becoming the only choice on how to fix this mess,” said William Frey, an investor advocate.

Mr. Frey said that the big banks were terrified that if eminent domain strategies became widespread, they would engulf not only primary mortgages but some $450 billion in second liens and home equity loans that are on the banks’ balance sheets. “It has nothing to do with morality or anything like that, it has to do with second liens.”

Many of the communities considering eminent domain were targeted by lenders who steered minority families eligible for conventional mortgages into loans with higher interest rates and ballooning payments. Robert and Patricia Castillo bought a three-bedroom, one-bathroom home in Richmond because their son, who is severely autistic, would anger landlords with his destructive impulses. They paid $420,000 for a home that is now worth $125,000, Mr. Castillo, a mechanic, said.

They have watched as their daughter’s playmates on the block have, one by one, lost their homes. But they are reluctant to walk away from the house in part for the sake of their son.