Teachers have paralyzed Mexico City in protest of President Nieto's sweeping reform bill, but do they have popular support or political leaders on their side? 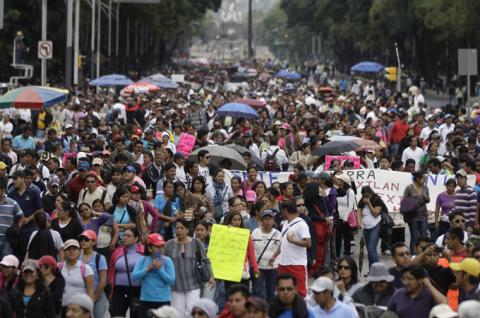 , Reuters
Over the course of September 2, while workers in the U.S. Celebrated Labor Day, Mexico’s teachers protested in the country’s capital and Mexican President Enrique Peña Nieto gave his first State of the Union address. During the speech Peña Nieto told the audience that his program for “education reform
will move forward because it carries with it the future of Mexico.” Despite fierce opposition from the teacher’s union, Peña Nieto is pushing forward with education reform.
“Our dilemma had been whether to continue to stagnate or to allow the state to recover the leadership and transform and improve the quality of education,” he said. Many teachers are intent on blocking the legislation which is designed to professionalize the staff at Mexico’s public schools and implement measures to test performance. On Sunday from a rooftop in Mexico City’s Roma neighborhood, I looked down at the street as hundreds of teachers passed by on the street below. “We can’t be compared to [rich] countries. We need distinct policies for the city and the countryside,” a man shouted into a megaphone. I saw massive banners that said “Zacatecas is ready to fight” and “Chiapas: In Battle Mode.” Marchers carried signs of Che Guevara and iconic Mexican revolutionary Emiliano Zapata. As they marched in front of the massive, glittering glass paneled offices of New York Life and HSBC, the teachers shouted “The fight goes on!”
A report from the BBC explains, “The education bill, which still needs the approval of the Senate, calls for mandatory assessment of teachers for them to keep their jobs and receive promotions. Under the current system, teachers can inherit their positions.” The teachers have paralyzed Mexico City. They camp out in the main Zocalo in the historic center and disrupt traffic with their marches. Their actions are making headlines, but they appear to be winning little widespread support for their complaints.
According to an AP report, “The bill approved by the House of Deputies is a slightly weakened version of Pena Nieto’s proposal, which sought to reassert government control over an education system where hiring and promotion was almost entirely in the hands of teachers’ unions. The reform sets up a competitive examination system for hiring and requires teachers to pass regular evaluations in order to remain in the classroom.”
Some critics have complained that while the bill takes the important step of wresting education policy from the union, the current draft of the reform legislation could do more in terms of creating a new system for teacher training.
The need for reform is apparent. High in the hills of poor states in southern Mexico, some schools hold classes outside because they lack proper facilities. Other schools lack drinkable water. Worst of all some schools don’t have teachers. A few months ago I visited a one room school on an isolated hilltop
in the state of Chiapas. It had a dirt basketball court and a rain collection system to provide students with drinking water. Though many citizens and analysts have called for changes, the national teachers union has stubbornly resisted reforms.
The Paris-based Organization for Economic Co-operation and Development, (OECD) found that less than 1% of Mexican students reach the advanced level in the math section of the OECD‘s Program for International Student Assessment exam. By contrast, about 10% of students north of the border in
the U.S. are able to reach the advanced level.
By this measure, overall, Mexico’s performance in math education is among the worst in the OECD. Low quality education is a major barrier for economic development. Mexican companies such as Mexichem and Cemex reported revenues of US$4.8 billion and US$14.7B in 2012. As global companies invest in increasingly complex factories and service provision centers in Mexico,
demand is growing for well-educated young workers. Education reform is a key component of helping the widest possible segment of the population enjoy the benefits of Mexico’s favorable position in the global economy.
In Mexico City, the teachers continue to protest, but Peña Nieto appears prepared to push the reform forward. “It’s a demanding, arduous road that requires of us great strength, but it’s the only one that will bring us the Mexico that we want to build,” he said during his address.
“The opportunity to accelerate our economy is inside of our country — it’s in the decisions that we will make as a nation,” he explained.
Nathaniel Parish Flannery, Contributor