Recently Richmond CA a majority "minority" city has been in the news with an innovative plan to take on the banks and fight blight and the banks have declared war on the city. Richmond is also the community that has taken on Chevron, and the soda industry, has passed "Ban the Box" and municipal IDs. This article describes the organizing that was critical to making all of this possible. 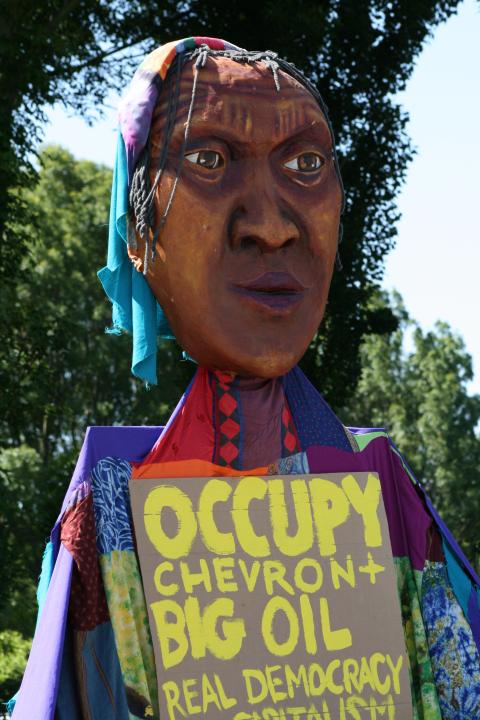 Occupy Chevron and Big Oil, Smedley Butler
In Richmond California (current population 105,000) residents have used community organizing to take on Chevron, the 8th largest corporation in the world, which has long dominated their city. Residents through the Richmond Progressive Alliance (RPA) have won a string of important battles since 2004. For the most part our successes have been the result of consistent organizing on a wide range of issues. Often it was David versus Goliath.
In the 2010 elections, the RPA faced an opposition actively endorsed by Chevron, the Chamber of Commerce, the Council of Industries, the building trades unions, the police and fire unions, the Central Labor Council, the Democratic Party, the main old-school African-American organizations, and the organization of Latino merchants. This grand coalition lost. In 2012 we came up short. Using its considerable resources Chevron has escalated its fight back but the community is not giving up.
There is much to be learned from the struggle. How do we take on corporate power in this country? The imbalance of power has been growing since the 1970”s. The Citizens United decision  took the already tilted playing field and jacked the corporate end up higher. At the same time, unions, a counterforce to corporate power, have grown smaller, weaker, and more confused about their mission. Under Democratic as well as Republican presidents, income inequality and the shift of political power toward the wealthy has grown.
Richmond is an Industrial town on the east side of the San Francisco Bay, north of Oakland and Berkeley. During World War II it grew from 30,000 to 130,000 as workers, particularly from the South, flooded in for jobs at the Kaiser Shipyards and other war industries. Following the war, the shoreline was filled with chemical plants, turning this prized land into an industrial dumping ground. As manufacturing declined much of the shoreline was left as toxic waste sites. Richmond could be a poster child for environmental racism. Thanks to the refinery, which regularly “flared”, releasing carcinogens and other pollutants into the atmosphere, and other polluting industries local asthma rates were among the highest in the state.
As a result of the migration of workers from the South, by the late 40’s and early 50’s Richmond had a significant African-American population. By the 90’s Richmond was well known for its racial tensions. African-Americans replaced whites in many city positions and in turn felt challenged by the growing Latino population. In the meantime whites continued to hold social power that resided in institutions like the banks, corporations, commercial operations, unions and most nonprofits. Violence gripped the city. In 2004, a national survey ranked Richmond as the most dangerous city in California and the 12th most dangerous in the US.
In the late 90’s Richmond city government was run mainly by a clique based in the police and fire unions (led by Darrell Reese, a leader of the fire unions), a PAC in the African-American community, BMW, (originally named for its Black leaders Bates, McMillan, Washington and since renamed “Black Men and Women) and industrial and commercial interests. These groups ran the elections, the city staff, and pretty much called the shots in a corrupt city government. {"Two Charge Reese With Using Influence, Richmond's Top Black Political Group Was Intimidated Into Endorsing His' Pick For Supervisorial Candidate, Politicians Say," West County Times, January 20, 1998 ; McMillan later denounced the Republican Reese’s control over BMW}
There were FBI investigations into city corruption. In 2001 the power broker Reese was convicted of income tax evasion. In 2003, due to mismanagement and cronyism, the city faced economic collapse with a $35 million dollar deficit necessitating layoffs of city workers and severe cutbacks in city services.
The corruption scandal, police brutality in the Latino community, financial chaos and a rising interest in “green” issues opened the way for the formation of the Richmond Progressive Alliance
Birth and Rise of RPA
The Richmond Progressive Alliance (RPA) formed in late 2003 from two groups. The Richmond Greens had started to work to decriminalize homelessness, stop police mistreatment of mostly Latino day-laborers, and take on a number of environmental issues including the toxic dumps on the shoreline. At the same time a group of Latino progressive Democrats had come together in response to a police beating on Cinco de Mayo in 2002.
Both groups recognized that the only way to make significant positive change in Richmond was to challenge the existing political power in the city. The two groups agreed to work together as the RPA supporting two candidates for City Council. Gayle McLaughlin, a Green Party activist and Andres Soto, a Latino community activist in the Democratic Party.
Richmond city council elections are non-partisan, so the alliance of Greens and Democrats did not need to overcome any structural obstacles. Both could maintain their identities and work together and both needed outside support to successfully compete in the at-large City Council elections.
The widespread corruption and disastrous financial state of the city resulted in an electorate that was open to change. The activists were identified as community leaders, who led community struggles such as The March 4 Education, a 90 mile march from Richmond to Sacramento to demand financial support for the local schools.
An incumbent independent Councilman, Tom Butt, wrote at the time:

The Richmond Progressive Alliance has rallied a seemingly unlikely group of Greens, Latinos, progressive Democrats, African-Americans and free spirits into a new Richmond political coalition that supports civil rights, the environment, education, open government and quality of life issues that could give the old establishment a run for its money. It’s the first Richmond coalition in memory united over ideals rather than power and personalities.

The campaigns were run as independent but mutually supportive organizations. Joint activities attracted well known progressives including Van Jones and Dennis Kucinich to speak at rallies. Soto who centered his campaign on police brutality was felt to have the best chance to win a council seat. As a result the Police and Fire Unions (led by Darrell Reese) the attack force for the corrupt network that ran the city, focused on defeating him, releasing well-timed, vicious “hit-piece” mailers: