Will the Supreme Court strike down Oklahoma’s devious attempt to stop doctors from prescribing the safest kind of medical abortion? 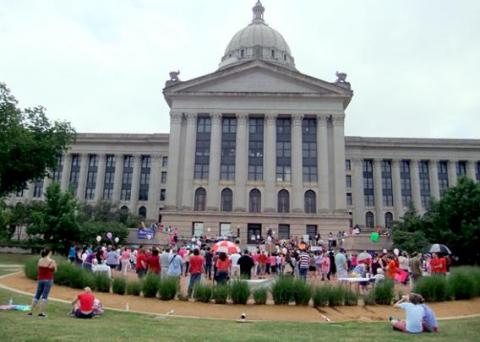 An April 28, 2012 pro-choice rally in Oklahoma City. A chalenge to a 2011 Oklahoma law making it harder for doctors to prescribe the drugs used to induce a medical abortion promises to be the next big Supreme Court case about abortion., peacearena/Flickr via Creative Commons

The biggest-ever wave of abortion restrictions has been flooding the states since Republicans victories in the 2010 election. The canny genius behind these new laws is that they reduce access to abortion in the name of protecting women’s health. The statutes are written to seem reasonable, sober, and safety based, perhaps none more so than the 2011 Oklahoma law making it harder for doctors to prescribe the drugs used to induce a medical abortion. A challenge to the Oklahoma law promises to be the next big Supreme Court case about abortion.

Medical abortions take place in the first trimester, and they offer an alternative to women who would rather have an induced miscarriage at home than a surgical procedure in a clinic. When the Food and Drug Administration approved a drug regimen for medical abortion in 2000, the hope was that the availability of the pills (mainly what used to be called RU-486, now known as Mifeprex) would make it easier for women to take them earlier rather than later in pregnancy, when they are safer and less controversial. That’s a good thing unless you oppose abortion at any time and in any form, which is why FDA approval of medical abortion came only after a long and bitter political Clinton-era battle.

That fight has now shifted to the states. Model bills, drafted in particular by the Americans United for Life—the ALEC of anti-abortion legislation—have attacked medical abortion in a couple of ways. The most popular route is to require the doctor who prescribes the drugs to be in the room when the patient takes it, rather than consulting with a nurse or midwife over the phone or via teleconference. Fourteen states have passed those laws, and most of them are in effect. The second kind of restriction requires the prescribing doctor to follow the FDA protocol for administering the drug. Five states, including Oklahoma, have these kinds of statutes on the books.

Oklahoma’s version isn’t written that clearly. It either bans all medication abortions (that’s the position of the Center for Reproductive Rights, which is challenging the law) or it requires doctors who do medical abortions with Mifeprex to follow the FDA protocol (that’s what the lawyers for Oklahoma say). Last year, the Oklahoma Supreme Court issued a terse opinion striking down the law as unconstitutional without really explaining why, or which interpretation of the law is correct. So when the Supreme Court agreed to review the case, the justices first sent it back to the state Supreme Court for clarification, as Amanda Marcotte explained in Slate.

What’s fascinating and brilliant about the law is the requirement that doctors follow FDA protocol for prescribing medication. Doesn’t that sound like a good idea? The problem is that it’s not how medicine works. To act otherwise in the case of medical abortion is to treat the doctors who prescribe these drugs—and their patients—as some lower, suspect class.

In general, an FDA protocol is written at the time a drug is approved, based on the available research at the time. After doctors start prescribing a drug, more studies come out, and they may well suggest that a drug has other uses, or can be better administered at a different dose or in a different way.  Doctors keep up with the latest findings and shift based on the accumulating evidence. This is what’s called “off label” use. “It’s perfectly legal and acceptable,” says Susan Wood, a public health professor at George Washington University and former FDA assistant commissioner for women’s health. (She quit over the Bush-era fight about approving the emergency contraception Plan B). “It’s also common in medicine.” The American Medical Association estimates that one-half of all prescriptions written are off-label, Yale medical school professor Nancy Stanwood told me.

When the FDA approved medical abortion in 2000, it was already legal in 18 countries. The standard regimen at the time was a dosage of 600 milligrams of Mifeprex, doled out over three clinic visits, and only to women in the first seven weeks of pregnancy. Since then, research has shown that it’s safe to use 200 milligrams, given at two clinic visits and then at home, for up to nine weeks of pregnancy (Here’s a handy comparative table). The American College of Obstetrics and the World Health Organization now advise 200 milligrams, given up to nine weeks. According to the brief filed in the Oklahoma case by the Center for Reproductive Rights, “96 percent of all medication abortions now involve an evidence-based regimen that departs from” the FDA protocol that’s on the label.

The alternate regimen is cheaper—the drugs cost $90 instead of $230. More importantly, abortion providers say, it’s just better care. “The FDA regimen is simply outdated,” says Rachael Phelps, medical director for Planned Parenthood in Rochester and Syracuse. “It is dramatically less effective, has more side effects, is harder for women to use, and increases the likelihood of an additional invasive procedure compared to the evidence based regimen. Mandating the FDA regimen forces doctors to provide substandard medical care and is just plain bad medicine.”

If this is so clear, then why hasn’t the drug manufacturer gone back to the FDA and asked to change the label? The first reason is that this drug companies aren’t required to go back for re-approval of off-label uses, so they generally don’t. Re-approval is expensive. And in the case of medical abortion, the big fight for approval the first time around doesn’t make going back to the FDA especially appealing. There’s only one maker of Mifeprex in the United States, a small company called Danco Laboratories that got started with money from liberal foundations and used to hide its address. (For fear of protests, the FDA didn’t release the names of the officials who reviewed Mifeprex when it announced approval for the drug.)

These days, Danco has a website about Mifeprex with a number for the media to call. In reporting this story, I heard that Danco may actually be going back to the FDA for approval of the alternate regimen as an on-label use. I called Danco’s number to find out if that’s true, and got back this statement: "Danco promotes Mifeprex only in accordance with the approved labeling. Danco does not comment on our interaction with the FDA."

Given that abortion providers rely on research data about the off-label use, maybe it would be a good thing for Danco to return to FDA so the label for Mifeprex reflects how doctors actually prescribe it. “Many people, including me, would like companies in general to go back to the FDA when they have new data,” Wood says. “It would help prescribers and health professionals use their products properly.”

But the Oklahoma law, and the likely Supreme Court battle over it, turn on a different question (to which Wood answered with a resounding no): Should states single out Mifiprex for different treatment from any other drug? On a deeper level, should states be in the business of ordering doctors to provide what they believe, based on the best medical evidence, is substandard care? Only in the field of abortion does the government interfere in this way with doctors and their patients. Is that really what the Constitution allows?