Definitely go out and buy Reign of Error: The Hoax of the Privatization Movement and the Danger to Americas Public Schools by Diane Ravitch. Reign of Error lays out step by step the relentless thirty year drive to either centralize the education of the young - on one hand - or divest it entirely into privatized hands on the other. Finally, the two sides have joined forces on a strategy that simultaneously does both. (Deborah Meier) 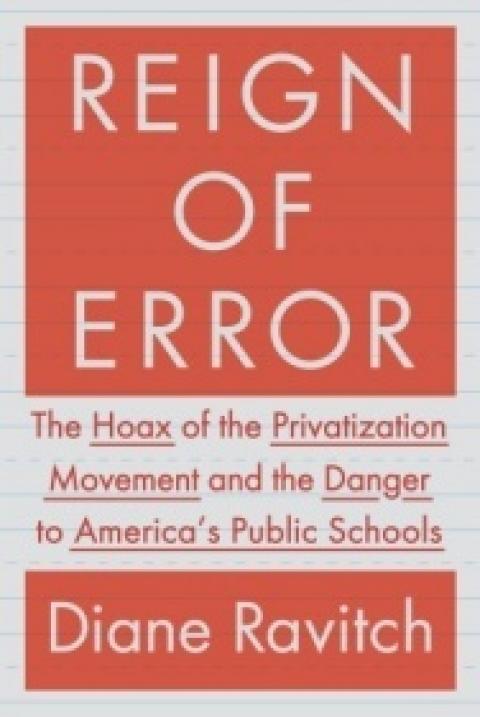 When it comes to schooling, Diane Ravitch is a traditionalist in most senses of the word. But a defender of traditional democratic education at a time when corporate-style reformers and her former conservative think-tank friends have all donned the label of r-r-r-revolutionaries and fancy themselves as educational "change agents", is not bad. They "monitor" her and target her as "an agent of the status quo." But nothing could be further from the truth.

In her latest book, Reign of Error: The Hoax of the Privatization Movement and the Danger to America's Public Schools,  Diane plays the role of a Texas-bred Paul Revere warning the populace that the privatizers are coming -- and coming they are, tearing away at all public space and with it, public decision making. Diane lays it out, chapter by chapter.

Genuine school reform must be built on hope, not fear; on encouragement, not threats; on inspiration, not compulsion; on trust, not carrots and sticks; on belief in the dignity of the human person, not a slavish devotion to data; on support and mutual respect, not a regime of punishment and blame. To be lasting, school reform must rely on collaboration and teamwork among students, parents, teachers, principals, administrators and local communities." (p. 325)

What I love and admire about Diane is that she's not just writing (she's prolific) but she's always out on the stump, uniting body and brain to get the message out. I don't know how she does it. I need a nap just thinking about it. Her book tour is turning out thousands for whom the message resonates. And it's been a pro-teacher message, resonating with the nation's teachers as no other. Her book provides all the ammunition they (we) need as we go into battle (and it is a battle, make no mistake) to save and transform public education.

In a smart marketing move, Diane and blogger/supporter Jonathan Pelto have mobilized a band of blogger/Tweeter allies (including me) to promote and review Reign of Error. I can't recall a book in recent times that's been reviewed by so many, from the complaintive mainstream press ("she's too loud") to her laudatory and grateful social media-based followers.

This review by my friend Deb Meier is one of the best I have read so far. Remember, it was largely through dialogue with Deb that Diane rediscovered her roots in democratic education and broke with her former allies in the right-wing think tanks.

Definitely go out and buy Reign of Error: The Hoax of the Privatization Movement and the Danger to Americas Public Schools by Diane Ravitch, which just been launched with proper publicity. She is a phenomenal woman - sending out a half-dozen e-mails a day, two books in the last decade, and traveling to speak throughout the USA. And..while she's younger than me, she's old enough to have rested on her laurels. Maybe it helps to change your mind, because my exhaustion comes (in part) from feeling it's all been said before (including by me).

Reign of Error lays out step by step the relentless thirty year drive to either centralize the education of the young - on one hand - or divest it entirely into privatized hands on the other. Finally, the two sides have joined forces on a strategy that simultaneously does both. While this coalition has many old roots, in its current form it began with the fanfare around the publication of A Nation at Risk (1983). Ravitch was, at that time, a supporter of this bold statement that more or less accused America's teachers and school boards of a plot to undermine American health and welfare of the international scene. We were, said the signers, at risk of becoming a second rate nation if we didn't take this crisis seriously. I asked my colleague on the NBPTS, AFT leader Al Shanker, why he had signed on. He said it was a good strategy because only in a crisis is the nation willing to put the money into schooling needed to make it really first-rate. He said - as I recall (paraphrased), `It's true our schools are not as bad as the report suggests, but we are entering a new period and they either have to change dramatically or what the report accuses them of will become true. We need a smarter citizenry.'

The trouble is that crying "wolf" has never been a great way to make sensible policy. Sometimes there is no choice (like Pearl Harbor). But the continuous claims that our public education system is destroying our nation has almost entirely led to bad policy.

And in the past few years Diane's change of mind has been a particular blessing. She hasn't, as her preset opponents claim, done a complete switch at all - she was always pro-union, pro-public education and always for standards. Fairly traditional ones. (In fact, her criticism of Progressive educators was that so many had abandoned all standards, she believed.)

Then lo and behold: no one has pulled it all together better than Diane - over and over again in the past few years she has led the challenge to the corporate reformers - right , center and left.. Her last two books Reign of Error and The Death and Life of the Great American School System (2010) pull it altogether.

In Reign of Error she spends the first 20 chapters laying out the case, and the last 13 offering some obvious and do-able responses to the oft-heard, "but what else can we do?" She's more supportive of the "way things were" than many other educators (like me) have been, relying subliminally perhaps on the fact that if we eliminate the scores of children in poverty on international tests, the USA does quite well. Yes, Massachusetts scores put it number one in the world, or close, if it were a nation (like Singapore?) rather than a mere state of the union. But I think neither of us is truly satisfied with what has passed for a good education in its highly regarded school districts, much less the districts that served the least advantaged schools. She also overestimates, in my view, the degree to which Americans ever attended "common schools" That's another story which all this crisis talk leaves untouched - or actually exacerbates as she ably documents, and where the promising fledgling progressive reforms of the 60s through 80s had focused attention on. As my mentor, and author of a study of American high schools, Ted Sizer said, "using one's mind well" is the essential unexplored task facing the high schools for democracy. We have barely skimmed the surface of making either our schools or our democracy "belong" to everyone.

Thanks, Diane. We all need to keep this book handy so we can whip out the citations to make our case for the kind of reform America really needs, in your own words: "to prepare citizens with the minds, hearts and character to sustain our democracy into the future."

[Mike Klonsky is an educator, writer, school/community activist, who lives and works in Chicago.]