Texas new voter ID law could prevent women who use maiden names or hyphenated names from voting. Women must present original documents verifying their name change. So far Texas has issued 41 free voter IDs to women who request one - out of 1.4 million Texas voters who lack the required documents. 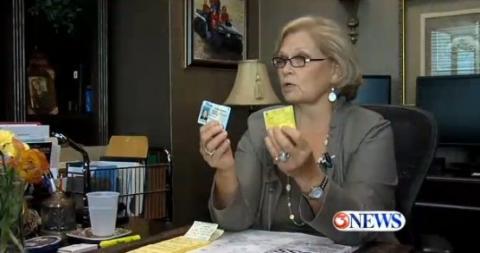 A Texas district judge who has been voting for the past five decades was almost barred from the polls Tuesday, thanks to the state's newly implemented, stricter voter ID law. The law kicked in on Tuesday as early voting in Texas' November 5 election began.

As she told local channel Kiii News, 117th District Court Judge Sandra Watts was flagged for possible voter fraud because her driver's license lists her maiden name as her middle name, while her voter registration form has her real middle name. This was the first time she has ever had a problem voting in 49 years. "What I have used for voter registration and for identification for the last 52 years was not sufficient yesterday when I went to vote," she said.

Watts worried that women who use maiden names or hyphenated names may be surprised at the polls. "I don't think most women know that this is going to create a problem," the judge said. "That their maiden name is on their driver's license, which was mandated in 1964 when I got married, and this. And so why would I want to use a provisional ballot when I've been voting regular ballot for the last 49 years?"

Many married women do not update their IDs after taking their spouse's surnames, as the process is arduous and costly. Women must present original documents verifying their name change, such as a marriage license, or pay $20 to obtain new copies. Under the new voter ID law, these women are potential voter fraud risks.

Watts is hardly the only woman who has encountered problems. ThinkProgress' Scott Keyes interviewed 84-year-old Dorothy Card, who was denied a voter ID three times even though she has voted for more than 60 years and provided extensive proof of identity.

While Watts, as an experienced judge, is familiar with the intricacies of election law, the people most likely to be stopped at the polls will be less informed about their rights. Low-income voters, minorities, students and seniors disproportionately lack the required identification - a fact that prompted the Justice Department and several federal judges to block the law under now-defunct provisions in the Voting Rights Act. After public outcry, Texas officials said they would distribute a free voter ID to eligible recipients who applied for one. As of this week, however, just 41 people received free IDs, out of the 1.4 million Texas voters who lack the required documents.

[Aviva Shen is a Reporter/Blogger for ThinkProgress. Before joining CAP, Aviva interned and wrote for Smithsonian Magazine, Salon, and New York Magazine. She also worked for the Slate Political Gabfest, a weekly politics podcast from Slate       Magazine. Previously, she was part of the new media team in Ohio for the 2008 Obama campaign. Aviva received a B.A. from Barnard College.]