"... [H]uman rights abuses under the existing government continue to threaten basic civil liberties, opposition candidates do not enjoy a level playing field, and state security forces are taking on an increasingly central, and ominous role in context of the election." 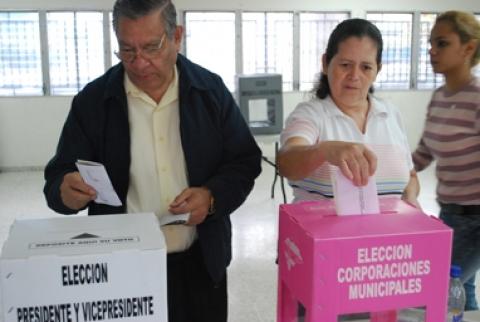 Do the people of Honduras have the right to elect their own president and congress?  That depends on whom you talk to.  In 2009, the country’s left-of-center President Mel Zelaya was overthrown in a military coup that was heavily supported (and according to Zelaya, organized) by the United States government.  After six months and a lot of political repression, the coup government was re-established with an election that almost the entire hemisphere – except, you guessed it, the United States – rejected as illegitimate.

Four years later – on November 24 – Honduran voters will go to the polls again in a contest between the pro-democracy LIBRE party, formed by people who opposed the coup; and the ruling National Party, whose standard-bearer will be Juan Orlando Hernández, the president of the National Congress who supported the 2009 military coup.

If it were a fair fight, it is very likely that LIBRE, whose presidential candidate is Xiomara Castro, the wife of Mel Zelaya, would win.  The economy plays a large role in most elections, and a government that has presided over a deterioration in living standards for the majority is generally not returned to office.  Polling data shows that 80 percent of Hondurans think they are worse off than they were four years ago, and the data backs them up.  The top 10 percent got over 100 percent of all income gains in the two years after Zelaya was overthrown, sharply reversing a strong trend toward more equality during the Zelaya years.  The number of people involuntarily working part time has increased by 176 percent.  Poverty has also increased, whereas it had been reduced significantly under Zelaya, who raised the minimum wage by nearly 100 percent in real terms during his 3.5 years in office.  Even private investment, despite the complaints of businesspeople who supported the coup, grew much faster under Zelaya than under the current regime.

But as you can imagine, this election will not be contested on a level playing field.  In the past six months both the U.S. Senate and the U.S. House of Representatives have sent letters to Secretary of State John Kerry expressing deep concerns about political repression and its implications for next month’s election in Honduras.   The Senate letter called attention to a “pattern of violence and threats against journalists, human rights defenders, members of the clergy, union leaders, opposition figures, students, small farmers, and LGBT activists …” as well as “extrajudicial killings.”

"... [H]uman rights abuses under the existing government continue to threaten basic civil liberties, opposition candidates do not enjoy a level playing field, and state security forces are taking on an increasingly central, and ominous role in context of the election.

"We are particularly alarmed to learn that the ruling party, and its presidential candidate Mr. Juan Orlando Hernandez, now dominates all the key institutions of the government, including the country's electoral authority and the military, which distributes the ballots--leaving scarce recourse for Honduran citizens should fraud be committed in the electoral process, or human rights violations continue to threaten open debate."

The problem is that the Obama administration does not respect either the right to free elections or basic human rights in Honduras.  They went through a lot of trouble in 2009 to get rid of a democratically elected president, and paid a significant political cost in the hemisphere: at the time, all of South America’s governments were hoping that Obama would be different from his predecessor and took his word that Washington would not back the coup.  They were more than disappointed; the Obama administration’s support for the coup and its manipulation of the Organization of American States for this purpose led to the formation of a new hemispheric organization, the Community of Latin American and Caribbean States, which excludes the U.S. and Canada.

What then can be done?  The governments of South America need to speak out forcefully on behalf of free elections and human rights in Honduras. Because the Latin American left has a deeply-rooted concern for national sovereignty, progressive governments have been reluctant to take any actions that look like interference in other countries’ internal affairs.  This puts them at a disadvantage against Washington, which has no such scruples and is intervening with millions of dollars in the current election.

But South America has often rallied behind governments threatened or harassed by the United States: most recently Venezuela after the April presidential elections and Bolivia when Evo Morales’ plane was forced down in Europe this past July.  And they intervened in 2009 to stop Washington from expanding its military presence in Colombia, which they saw as a threat to the region.

As President Rafael Correa of Ecuador pointed out in 2009, Washington’s coup in Honduras was also a threat to the region, and so is its collaboration with the resulting government to prevent democratic elections.  And so is the militarization of Honduras, with the U.S. expanding its bases there.  This is part of Washington’s response to the election of left governments throughout most of the hemisphere: to increase its military presence and solidify its control in the few places where, thanks to the snuffing out of democracy, it still reigns supreme.

South American leaders need to remind the world that this is a struggle for self-determination – that Hondurans do not forfeit their national and civil rights just because the U.S. has military bases in their country and thinks that this is more important than free elections.

See more of Mark Weisbrot's analysis of the Western Hemisphere at The Americas Blog.