Keeping Us in the Dark About Latin America

Many of us here in the U.S. had entertained the notion that whatever disappointments await us after the election of the U.S. President Barak Obama, at least the reactionary U.S. policy toward Cuba might change 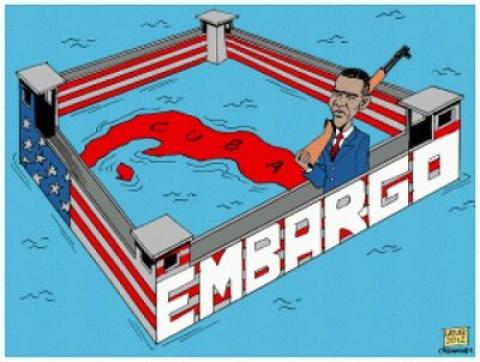 'It’s like it didn’t happen; not even a two-inch World Briefing. On October 29, the United Nations General Assembly voted overwhelmingly, for the 22nd time, to condemn the 5-decade-old U.S. economic embargo against Cuba. The New York Times did about as much as it could to ignore it. So, for those amongst us that rely on the newspaper of record for all the news that’s fit to print, here’s what had occurred.

The 193-nation UN General Assembly approved a resolution entitled "Necessity of ending the economic, commercial and financial embargo imposed by the United States of America against Cuba." There were 188 votes in favor of the resolution. The only countries voting “no” were the United State and Israel.

Last year, Palau voted with the U.S. and Israel; this year the tiny Pacific island abstained, along with fellow island nations Micronesia and the Marshall Islands.

On the afternoon of October 29, the day of the UN vote, the Reuters brief report on the resolution appeared on the Times website.

The Reuters report noted that “U.S. President Barack Obama, who said before taking office that he wanted to recast long-hostile U.S.-Cuba relations, has been a disappointment to the Cuban government, which hoped he would do more to dismantle the embargo.”

Actually the disappointment goes far beyond Havana. Many of us here in the U.S. had entertained the notion that whatever disappointments await us after the election of the U.S. President Barak Obama, at least the reactionary U.S. policy toward Cuba might change. But that was not to be.

Cuba represents absolutely no threat to our country. With Washington maintaining, and even shoring up, relations with some of the most reactionary regimes on the planet it would be hard to make a case that the blockade has anything to do with human rights. Ambassador Ronald D. Godard, U.S. senior area advisor for Western Hemisphere Affairs, would seem to have made the Obama Administration’s motivation for maintain the blockade quite clear. He drew attention to the “economic policies” Cuba “has pursued for the past half century,” adding that while the Administration welcomes “recent changes, such as those that allow greater self-employment and liberalization of the real estate market, Cuba still has one of the most restricted economic systems in the world.”

“Irrespective of U.S. policy, it is unrealistic to expect the Cuban economy to thrive until the Cuban government opens its state monopolies to private competition, fully empowers Cuban entrepreneurs, respects intellectual property rights, allows unfettered access to the Internet, and adopts the sound macro-economic policies that have contributed to the success of many of Cuba’s neighboring countries in Latin America,” Godard told the Assembly.

So, apparently the U.S. government intends to maintain its policy of dictation and economic corrosion unless, and until, the Cubans change their internal economic policies. The problem is that this stance runs against international norms and is opposed by the vast overwhelmingly nations of the world.

Most particularly the countries of Latin America.

All Latin American, European and African nations voted for the anti-blockade UN resolution.

Speaking out against the embargo was the Ethiopian delegate on behalf of African countries, Iran on behalf of the 120-nation non-aligned movement, and India, Mexico, China, Ecuador, Russia, Bolivia, Indonesia and Nicaragua. "The call of the international community is getting louder and louder, demanding that the US government change its policy toward Cuba," said China's deputy UN ambassador Wang Min. Bolivian UN ambassador Sacha Llorenty Soliz said the embargo is "sullying the history of mankind."

It is not all surprising that the New York Times choose to pretty much ignore the story of the blockade vote. I have always imagined that there is a banner in the paper’s newsroom that reads: “The Monroe Doctrine Lives.” Of course the Times has a right to say or report on whatever it chooses but this particular incident of turning a blind eye might be a good topic for the paper’s “Public Editor” Margaret Sullivan to take up. She might also ask why with an important and contentious election coming up in Honduras, the paper hasn’t carried news from that Central American country for a couple of months?

This despite the fact that since the June 28, 2009 military coup, which the U.S. refused to condemn, there has been a rash of political violence targeting various social activists and opponents of the current regime and international human rights organizations, including the Inter American Commission of Human Rights, the UN Human Rights Commission, and the Committee to Protect Journalists, have cited widespread human rights abuses.

In the lead up to the now slated November 24 Honduran Presidential election, the situation has attracted the attention of members of the U.S. Congress. In June 24 members of the Senate penned a letter to the State Department to examine the Honduran government’s commitment to uphold the rule of law, denounce rights abuses and to do what it can to promote elections that are "free, fair and peaceful." On October 15th three members of the House of Representatives, Representatives Raúl Grijalva (D-AZ), Hank Johnson (D-GA) and Mike Honda (D-CA) wrote to Secretary of State John Kerry saying “the freedom and fairness of election is very much at risk, as human rights abuses under the existing government continue to threaten basic civil liberties, opposition candidates do not enjoy a level playing field, and state security forces are taking on an increasingly central, and ominous role in context of the election.”

I don’t really think there is any mystery has to why the major media in the U.S. has ignored or downplayed the UN blockade vote, the threat of election violence in Honduras or a number of other recent significant political developments in and around Latin America. U.S. policy toward the region – still imbued with the spirit of neo-colonialism – has led to Washington’s increased political isolation in the hemisphere. While President Obama is pivoting to Asia he might consider swinging south and assessing what current U.S. policy toward Latin America is reaping. And the major media could do a better job of informing us about what is unfolding there.
____________________

BlackCommentator.com Editorial Board member and Columnist Carl Bloice is a writer in San Francisco, a member of the National Coordinating Committee of the Committees of Correspondence for Democracy and Socialism and formerly worked for a healthcare union. Bloice is one of the moderators of Portside. Other Carl Bloice writing can be found at leftmargin.wordpress.com.