Although Twitter’s founders, investors and employees deserve to be rewarded for their ingenuity and hard work, the company’s public offering provides an opportunity to take stock of the growing disparities and misplaced priorities in the home of the nation’s celebrated technology industry. 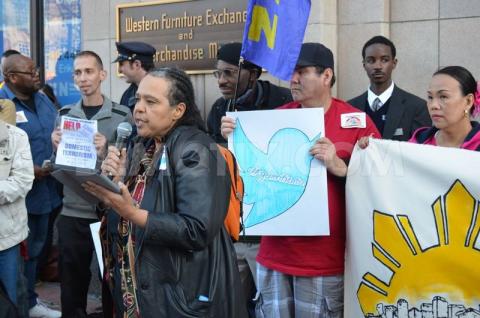 Chandra Radack who is facing eviction a few blocks away at 1049 Market St where she has lived for 10 years speaks at a protest at Twitter HQ., Demoltix

This week, while executives from Twitter were celebrating a successful initial public offering on the New York Stock Exchange, San Franciscans wearing “Don’t Twit on Me” stickers were picketing the company’s headquarters because its presence in their neighborhood has made it unaffordable.

San Francisco is not the first place to struggle with the pains of gentrification – just talk to long-time residents of many Brooklyn neighborhoods. But the mammoth success of San Francisco’s technology businesses has put the divide between its haves and have-not’s in stark relief. Twitter’s founders and biggest shareholders now enjoy paper wealth of billions of dollars, while many of their neighbors in San Francisco are struggling to make rent.

The San Francisco-Oakland metropolitan area had the third highest median gross rent in the country in 2011, at $1,345 a month, according to the Census Bureau. The prize for the highest rent went to the neighboring metropolitan area of San Jose-Sunnyvale, which is home to Silicon Valley and companies such as Google and Apple. About 42.5 percent of renters in San Francisco spent more than 35 percent of their income on rent in 2011, up from 40.2 percent in 2009.

Although Twitter’s founders, investors and employees deserve to be rewarded for their ingenuity and hard work, the company’s public offering provides an opportunity to take stock of the growing disparities and misplaced priorities in the home of the nation’s celebrated technology industry.

San Francisco has given generous tax breaks to Twitter and other businesses to come to or stay in the city. (A conservative city estimate put the cost of the tax break to just Twitter at $22 million, according to a Reuters story.) Meanwhile, a recent story in the San Francisco Chronicle described how the city cannot afford to replace elevators in its public housing buildings, at an estimated cost of $8.4 million. These constantly break down, stranding elderly and disabled residents. The broken elevators are just one example of the poor job San Francisco and other Bay Area cities do in providing affordable housing to their citizens.

Earlier in the week, in a vivid sign that residents of San Francisco are growing weary of such inequality, voters shot down two proposals that would have allowed developers to construct a 136-foot luxury condominium building along the Embarcadero. (City policies restrict waterfront developments to 84 feet.) Voters seemed little persuaded by Mayor Edwin Lee, a big backer of the technology industry, and other supporters of the project who had argued that it would benefit the city by adding $11 million to the city’s affordable housing fund and creating open public space.

Over its history, San Francisco has attracted people from all over the country and world. It should also welcome tech entrepreneurs. But it needs to do so without making it impossible for those who came before to stay in the city.