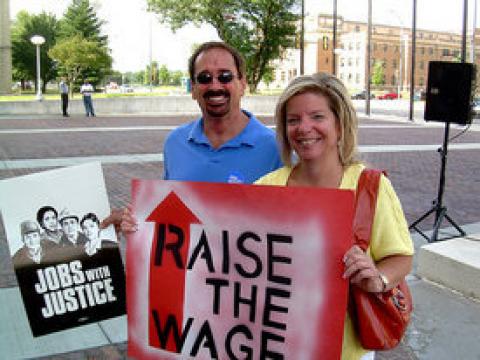 Results from a new poll follow a clear trend--Americans want an increase in the minimum wage., uusc4all/cc/flickr

Americans are overwhelmingly in favor of raising the federal minimum wage, a new Gallup poll shows.

Asked if they would vote to raise the minimum wage from $7.25 to $9 an hour, 76% of poll respondents said yes—that's up five percentage points from Gallup's March poll asking the same question.

Support for the hike also crossed partisan lines. 91% of Democrats and 76% of Independents favored the hike, and while the increase had less support from Republicans, 58% still said they would vote for the $9 wage.

Asked if they would support the $9 wage with automatic increases tied to the inflation rate, 69% of poll respondents said yes.

Critics have blasted a call for a $9 minimum wage as not nearly enough, and MIT's Living Wage Calculator shows that rate would still leave many without a living wage.

Recent research from the Center for Economic and Policy Research (CEPR) showed that "[i]f we measure inflation from 1968 forward using the same procedure we use today (the way we calculate inflation has been updated several times since the late 1960s), the 2013 value of the minimum wage would be $9.42—almost $2.25 higher than it is today."

If the 1968 wage had been indexed to the official Consumer Price Index (CPI-U) going forward, it would be $10.75, CEPR stated.

Further, they found that "[i]f the minimum wage had continued to move since 1968 in line with what our CEPR colleagues call 'usable productivity' (which for technical reasons has grown more slowly than productivity as conventionally measured), the minimum wage would be $17.19 per hour in 2013, nearly two and half times its current value."

The results of the new poll are indicative of a clear trend, as media watchdog group Media Matters detailed on Monday:

At the ballot box, all of the statewide minimum wage increases that have been proposed since 1998 have passed, including a recent constitutional amendment in New Jersey which voters overwhelmingly supported. Business owners also favor an increase: an April poll by Small Business Majority found that a "67% majority of small business owners agree the current federal minimum wage of $7.25 per hour should increase, and that it should be adjusted annually to keep pace with the cost of living."

The National Employment Law Project (NELP) says that a minimum wage increase to $10.10 would be a "win for workers," positively impacting "nearly one in every five workers in the country." A February 2013 survey of economists conducted by the University of Chicago's Booth School of Business found broad support for President Obama's previous call for raising the minimum wage to $9.00. The Center for Economic and Policy Research has explained that raising the minimum wage has no "discernible impact" on employment, and that wage increases often result in more jobs rather than less.