Race, Class, Labor, and the (Not So) Incognito Controversy

The fact that the principals involved in this saga are all elite male athletes engaged in blood sport should not blind us to the fact that everyone, regardless of salient identities, is deserving of safe workspaces. 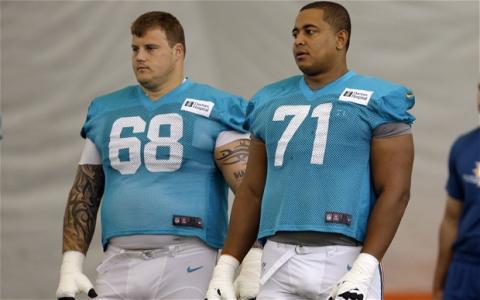 To recap: In late October, Martin walked away from the team, alleging hazing by teammates that crossed the threshold into extreme, constant intimidation and harassment.  Amid a review of the situation by the Dolphins and the NFL Players Association (NFLPA), the team handed an indefinite suspension to Incognito, who is believed to be the ringleader in tormenting Martin.  The major piece of evidence against him so far is a chain of crude texts and voicemails, one of which referred to Martin as a “half-nigger piece of shit” and threatened harm to him and his family.  At first glance, given the pronounced masculinist culture surrounding the NFL, and the violent physicality of the sport itself, it is difficult to process how a 6-foot-5, 312-pound elite professional football player, with a $5-million contract, can be the victim of bullying.  Predictably, other members of the team have circled the wagons around Incognito, criticizing Martin for not dealing with his teammate directly or otherwise “manning up.”  Incidentally, this was the same sentiment I encountered last week in class with a few student-athletes, most of whom would eagerly switch places with Martin for the opportunity to play in the pros – and, as well, who recounted their own volatile experiences with other players in practice and on the field as evidence of how often these sorts of disputes, including racially freighted conflicts, occur.  The consensus seemed to be that this was not a big deal, except for the fact that Martin made it one.

Yet, this indifference overlooks the fact that the NFL is the world’s most lucrative sports league, with its 32 member clubs worth an average of $1.17 billion (According to Forbes, the Dolphins are valued at $1,074 million, and the franchise’s 2012 revenue was $268 million.)  Moreover, the players are represented by the NFLPA, a collective bargaining agent.  What this means is that the football club, among other things, is a work environment.  However rough the sport may be, or however much the players may be paid, they have the right, individually as well as collectively, to raise workplace concerns and pursue appropriate remedies.  Granted, this goes against the grain of homosocial work cultures in which men have been expected to stoically endure physical and emotional punishment as a sign of self-mastery.  Yet, one need look no further than the growing alarm over concussions in American football to see how debilitating, even deadly, this model of manliness can be for its very own proponents.  Moreover, this will to self-mastery has also been a prelude to enforcing one’s mastery over others, whether through sexual violence against women or the domination of other men perceived as weak.  Further, as is too often the case in other areas of work life (including the academy) when an employee lodges a complaint of harassment or discrimination, he or she invariably becomes “the problem” instead of the climate of harassment.

Consequently, despite Incognito’s well-publicized history of extreme behavior, involving run-ins with teammates, opponents and coaches extending back to his days at the University of Nebraska, there is every reason to believe that his professional career will continue.  Martin, on the other hand, may very well be finished because of his whistleblowing, given that he will have a difficult time finding acceptance in any NFL club.  Therein is the tragedy.

Some sports commentators have alluded to Martin’s background as a child and grandchild of Harvard-educated professionals, pointing to his bourgeois class upbringing as the reason why he is either too “soft” (for those who scorn him) or too “sophisticated” (for those who empathize with him) to conform to the rough-and-tumble environment of a working man’s sport.  Yet, how would this whole narrative be slanting had Martin “been a man” and gone blow for blow with Incognito – or, worse yet, availed himself of one of the many easily accessible firearms in this nation and shot him?  In all likelihood, Martin would have taken his place alongside peers like wide receiver Dez Bryant, whose televised outbursts during the Dallas Cowboys’ loss to the Detroit Lions sparked conversation about his troubled, unstable upbringing; Aaron Hernandez, the former New England Patriot facing first-degree murder charges in a 2013 shooting death; and Kansas City Chiefs linebacker Jovan Belcher, who in December 2012 shot his girlfriend to death during an argument, drove to the team’s practice facility near Arrowhead Stadium, and committed suicide in front of the head coach and a member of his staff.  That is, he would have become more fodder for racially tinged commentaries, in sports columns and blogs, about professional “thug” athletes unable to control their violent tendencies off the field.

One of the most provocative observations that I’ve read yet about the Martin-Incognito situation comes from ESPN sportswriter Jason Whitlock.  Reacting to a recent story by Miami Herald sports columnist Armando Salguero (“Incognito Considered Black in the Dolphins Locker Room”), Whitlock lamented the fact that “black Dolphins players granted [Incognito] ‘honorary’ status as a black man while feeling little connection” to Martin  (See Jason Whitlock, “Martin Walked into Twisted World,” ESPN.com, November 8, 2013 http://espn.go.com/nfl/story/_/id/9941696/jonathan-martin-walked-twisted-world-led-incognito).  Likening the Dolphins locker room to a “maximum-security prison yard,” Whitlock suggests that the players’ reaction is indicative of the racialized mass incarceration that “has turned segments of Black America so upside down that a tatted-up, N-word-tossing white goon is more respected and accepted than a soft-spoken, highly intelligent black Stanford graduate.”  Whitlock’s anger with this paradox of race and manhood is understandable, and he is absolutely correct in one regard: It is only through the most twisted logic that anyone can validate Incognito’s misdeeds as representing a racially “authentic” black code of behavior.  Nonetheless, Whitlock himself too easily falls for a black “underclass” discourse linking the black players’ attitudes to their roots in female-headed family dysfunction and cultural pathology, including what he terms “Hurricane Illegitimacy.”  As if his views on class, culture, and black racial uplift could not be clearer, he also marshals the politics of “respectability” on Martin’s behalf, emphasizing the latter’s Ivy League class origins as the reason why he has a “developed brain and a supportive family unit,” and why he does not have to desperately cling to football as his only career option.

While rightfully championing Martin and aiming to inject frank considerations of race and inequality into a conversation about football, Whitlock mainly succeeds in reifying black bourgeois exceptionalism and reinforcing the criminalization and cultural “othering” of the working-class communities of color from which many of the NFL’s players hail.  Yes, Martin comes from a comfortable two-parent household nestled in a stratum of the U.S. middle class.  So does Incognito, yet no one has seriously pondered whether white middling class communities breed young men and women with inclinations toward personal violence, or for that matter, substance abuse, mental illness and promiscuity.  Aside from the problematic general assumption that Whitlock makes about race, gender, and class – i.e., that the middle and upper classes are the natural seedbed of moral behavior and social virtue – he absolves of responsibility the corporate culture of the NFL, which finds value and profit in the routinized violence, martial spirit, and cult of masculinity that define the sport.  Incognito – voted the “NFL’s Dirtiest Player” in 2009 – has a well-earned reputation for overly aggressive conduct, but he has not persevered in professional football for this long simply because his peers, black and white alike, have tolerated it.  To the contrary, his behavior comports with the values of the sports industry and its personnel, which rest on the principle of winning at any and all costs.  Not surprisingly, one emerging news angle is that Dolphins coaches not only condoned Incognito’s conduct but also actively encouraged him in his campaign of intimidation in order to “toughen up” Martin.

Paraphrasing Dave Zirin (my favorite sportswriter from the left), NFL owners are among the wealthiest, most influential people on the planet, while most of their players have a career averaging less than four years (though their injuries are lifelong) and die two decades earlier than the average U.S. male.  The fans, meanwhile, are fleeced of their tax money to build stadiums to which the typical citizen cannot afford tickets.  This is not to mention the fact that these stadiums themselves are often part of postindustrial metropolitan development schemes that brutally displace economically poor neighborhoods and communities.  To be sure, the culture of the NFL ought to change – the attitudes and behavior prevalent among current NFL players, and the broken bodies of many former players, tell us this much.  But as Martin is demanding through his actions, the change ought to start in the front office and not the locker room.  The fact that the principals involved in this saga are all elite male athletes engaged in blood sport should not blind us to the fact that everyone, regardless of salient identities, is deserving of safe workspaces.

Clarence Lang is an Associate Professor of African and African-American Studies at The University of Kansas, and a former Langston Hughes Visiting Professor. He received his Ph.D. in History from the University of Illinois at Urbana-Champaign in 2004.