Growing income inequality will pose a major threat to social stability in countries around the globe, according to a new report by the World Economic Forum. 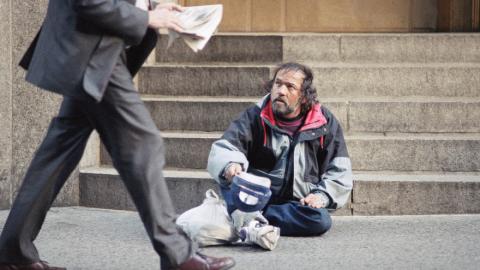 WASHINGTON - Growing income inequality will pose a major threat to social stability in countries around the globe, according to a new report by the World Economic Forum.

Based on a worldwide survey of experts from academia, government and the non-profit sector, the report finds that income inequality is the second most important trend in the top 10 that are likely to impact social stability over the next year.

“People see that there is that one percent of the population that is at the very top of the system and keeps on accumulating wealth." -- Christian Meyer It cites rising tensions in the Middle East and persistent structural unemployment as other major global threats.

But while the findings are primarily geared toward highlighting income inequality within countries, experts suggest that there is also a global picture that needs emphasis, one where national borders are less of a factor.

“Looking at income inequality within a given country makes perfect sense, because government policies will affect the way people live there,” Christian Meyer, a research associate at the Center for Global Development (CGD), a think tank here, told IPS.

“But there’s also an international perspective, one that goes beyond the national level, where if we take people and compare their income levels, without thinking about national borders, we will find that income inequality is incredibly high, much higher.”

The report is based on responses offered by the nearly 1,600 experts that make up the Network of Global Agenda Councils (NGAC), a global community of over 80 councils representing “thought leaders” around the world. The World Economic Forum is an independent international

organisation based in Switzerland, committed to improving the social and economic state of the world.

Poor Paths Lead to Madrassas Déjà Vu All Over Again for Indebted Caribbean Ethiopia’s Indigenous Excluded from Rapid Growth “Widening wealth disparity affects every part of our lives,” the report notes. “It’s impacting social stability within countries and threatening security on a global scale, and looking ahead to 2014, it’s

essential that we devise innovative solutions to the causes and consequences of a world becoming ever more unequal.”

According to this new body of research, growing income inequality has become a major threat in both the developing and developed world, including North America, where the survey reveals that income inequality is the number one challenge.

The “incredible wealth created over the last decade in the [United States] has gone to a smaller and smaller portion of the population,” the report warns, “and the disparity stems from many of the same roots as in developing countries.”

According to the WEF survey, nearly two-thirds of U.S. citizens think that the current economic system favours the wealthy. But in some European countries, where people are still recovering from the global economic crisis that has left thousands of people out of work, the percentage is much higher.

As the gap between rich and poor widens according to both national and international metrics, analysts worry that people will be more likely to take the streets to voice their frustrations with a system that paves the way for the privileged few. This scenario, the report notes, is likely to lead

to greater social instability and may threaten global security.

“Unrest cloaked in a desire to change from one political leader to another is a manifestation of people’s concerns about their basic needs,” the report notes. It also stresses that it is usually the young who are most willing to do so, as they feel “they have nothing else to lose.”

“People see that there is that one percent of the population that is at the very top of the system and keeps on accumulating wealth,” the CGD’s Meyer says. “So they realise that there must be something wrong going on at the top, that this is a form of ‘elite capture’.”

Indeed, the perception of elite capture, or the lack of social mobility, is what seems to be at the root of much of this widespread disaffection.

“The problem with this concentration of income is that it self-perpetuates from one generation to the other through a series of mechanisms, such as good education, but also through the access to good networks,” Ricardo Fuentes, head of research at Oxfam Great Britain, a humanitarian group, told IPS.

“This self-perpetuation means that the whole idea of equality of opportunity and that ‘all men are created equal’ is seriously undermined.”

This phenomenon, Fuentes notes, has led to people increasingly believing that personal effort and merit will not bring them anywhere, and that their government will only listen to the voices of the rich.

“Even in countries where governments are elected democratically,” he says, “we are increasingly seeing that the rich use their money to influence the government and the media through lobbies and other mechanisms that make them particularly influential.”

The report’s release comes as the NGAC’s leaders are gathered in Abu Dhabi Nov. 18-20 for the 2013 Summit on the Global Agenda, where they plan to discuss the topics that will be part of the yearly summit the WEF will hold in Davos, Switzerland, in January.

At the summit’s opening, WEF founder and chairman Klaus Schwab noted that the “biggest challenge we have today is the incapability of the system of global governance to take the necessary time and devote the necessary attention to construct our future.”

As leaders seek to come up with solutions to income inequality, some suggest that the recent growth witnessed by some Latin American countries may be one way to tackle the issue elsewhere.

“We know from history that having a more equal society is not a utopian objective,” Fuentes says. “Up until the 1980s, there was more investment in public education, a conscious effort by the state to strengthen safety nets, and a growing standard of living for workers.”

More countries, particularly in Latin America, are taking fiscal measures that reflect these policies, he says, at least according to certain indicators. “And now, they have actually started to reverse inequality.”