Decentralized protests instead of large rallies - this is Blockupy's modus operandi. At a meeting in Frankfurt, the critics of capitalism are planning new demonstrations against the EU's strict austerity measures 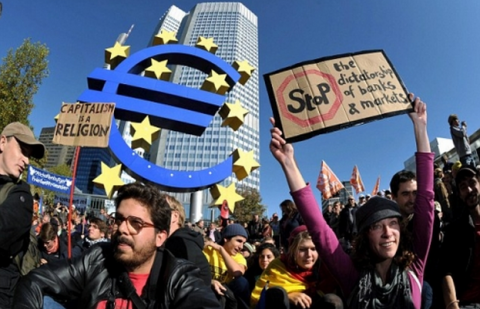 Measuring just under 200 meters (about 656 feet), the twin towers of the European Central Bank's (ECB) new headquarters in Frankfurt can be seen from the city limits. From these lofty heights, Europe's financial experts will watch over the EU's common currency when the building is completed a year from now.

Together with the European Union and the International Monetary Fund (IMF), they will oversee the efforts of Southern Europe's crisis-battered states to stick with their austerity schemes.

And for that reason, the towers in the city's east end are also expected to become the new center of a storm of protest. The first demonstration is already scheduled for the day of the official opening, and on Sunday (24.11.2013), representatives of the Blockupy movement will plan for that event.

The alliance has influence among capitalism critics and globalization opponents who want to disrupt the work of the ECB. Earlier this year, protests in the spring saw about 10,000 demonstrators march through Frankfurt, many of them previous participants in the protest camps that sprung up around the ECB's headquarters in recent years.

Fear of the future adds momentum

In recent months, though, the movement has grown quiet. With their meeting in Frankfurt on Sunday, the 300 participants from Germany, Greece, Italy and Spain want to give the movement new energy, to protest against Europe's fiscal policy in the wake of the debt crisis.

"We're planning decentralized days of protest across Europe," said Roland Süss of Germany's anti-globalization pressure group, Attac, in addition to the main demonstration at the ECB. As a preventative measure, the Frankfurt police have proposed to meet with the organizers and their associated groups and start a dialogue. They want to avoid scenes like those in the spring, when there were violent clashes between police and demonstrators.

In addition to Attac, various leftist groups and unemployment groups from several European countries are also part of the Blockupy movement. The more people fear for the future, the more they join the protests in Spain, Greece, Portugal or France - to Blockupy's benefit.

But the core of the protest alliance is still found in economically strong Germany, partly because the ECB is based in Frankfurt, according to Oliver Nachtwey, of the economic sociology department at the University of Trier. In addition, he said, economically strong Germany has backed strict austerity policies and made the struggling Southern European countries into victims, a move also criticized by many Germans. Southern Europe's own protest movements, such as the Indignados (the "Indignant") in Spain, have risen in response.

Blockupy's weekend conference is an attempt to bring all these individual protest movements together and forge a common front. Nachtwey, however, does not expect an immediate success, partly due to the language barrier which has made common decisions difficult. A lack of funds is also a factor. Transporting thousands of protest participants from several European countries to a common demonstration in Frankfurt is unrealistic, he said.

"I think that the future lies in simultaneous, decentralized protests," said Nachtwey, adding that Blockupy has successfully used this strategy in the past year, organizing synchronized protests in about 70 European cities.

This increase in pan-European protests is new and remarkable, said Nachtwey. "They have reached an intimacy and synchronicity that hasn't been seen since World War II." Even more astonishing is the fact that Blockupy has achieved this without a central leadership. The principles of one or a few leaders cannot be enforced on a higher level, said Nachtwey, adding that these groups have reservations when someone tries to be the star.

Search for a common path

A decentralized management makes it difficult, however, to form a sharp consensus on specific topics, and in a society heavily oriented around the media, a group like Blockupy needs someone to publically articulate its views. However, this procedure can also have its advantages, as Nachtwey brings up the leftist movements of the 1970s, where a departure from the doctrine was seen as a betrayal. Many of these groups had a falling out and ultimately disintegrated due to inner conflict.

Attac's Süss, on the other hand, sees no problem in working with radical groups such as the Interventionistischen Linken (the "interventionist left") - as long as people can agree on a lowest common denominator. And that commonality is the criticism of the capitalist system. "We will find ways to deal with each other and accept each other, in spite of our different ideas," he said.

Nachtwey sees many advantages with Blockupy's unusual method. Although Blockupy may disappear from time to time from the public consciousness, it's never gone for long. "These movements are slower, but they may also be more sustainable," he said.