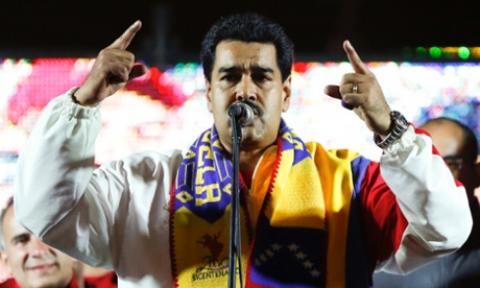 President Nicolás Maduro's party won the most votes in Venezuela's local elections on Sunday, disappointing the opposition and helping his quest to preserve the late Hugo Chavez's socialist legacy.

With votes in from three-quarters of the nation's 337 mayoral races, the ruling party and allies had combined 49.2% support, compared with 42.7% for the the opposition coalition and its partners, the election board said.

"The Venezuelan people have said to the world that the Bolivarian revolution continues stronger than ever," Maduro said, referring to Chavez's self-styled movement named after the independence hero Simon Bolivar.

In a triumphant speech in Bolivar Square in downtown Caracas, Maduro mocked the opposition leader, Henrique Capriles, and urged him to resign.

"They underestimate us. They call me a donkey, there is social racism," he said. "They said that today was a plebiscite, that Maduro would have to leave the presidency after today."

The government took nearly 200 municipalities, with three-quarters counted, reflecting the traditional strength of "Chavismo" in rural and poorer areas.

As expected, the opposition performed well in urban centres, keeping the principal mayorship of the capital, Caracas, and that of Venezuela's second city, Maracaibo. The opposition also won the capital of Barinas, Chavez's home state.

But its failure to win the overall vote share was a blow to Capriles. Capriles had repeatedly called for the vote to be seen as a referendum on Maduro's performance.

"I did everything humanly possible," Capriles said after the results were out. "Remember that Venezuela does not have a single owner. A divided country needs dialogue."

Since taking power in April, Maduro, a 51-year-old former bus driver, has faced a plethora of economic problems including slowing growth, the highest inflation in the Americas and shortages of basic goods including milk and toilet paper.

Yet an aggressive campaign launched last month to force businesses to slash prices proved popular with consumers, especially the poor, and helped Maduro's candidates on Sunday.

Sunday's election was the biggest political test for Maduro since he narrowly won the presidential election after Chavez's death from cancer ended his 14-year rule of the OPEC nation.

Winning the overall vote share may help Maduro shake off perceptions of weakness, enabling him to exert more authority over the different factions in the ruling Socialist Party and perhaps take unpopular measures such as a currency devaluation.

Opposition activists alleged some irregularities on Sunday, including intimidation of some observers and the use of state oil company PDVSA's vehicles to ferry pro-government voters.

Capriles accused the government of intimidating local media to silence his voice and running the most unfair campaign in Venezuelan history.

"I had to go round the country practically with a megaphone in my hand ... This campaign saw a brutal waste of Venezuelans' resources (by the government)," he said in a midnight speech.

But unlike after April's vote, Capriles did not appeal against the validity of the results.

Capriles may find his authority challenged within his coalition after Sunday's results.

"They did not achieve their objective of a protest vote against Maduro," local pollster Luis Vicente Leon said.