Demolishing the Mythology Around the Vietnam Antiwar Movement

Book Review: Hardhats, Hippies, and Hawks: The Vietnam Antiwar Movement as Myth and Memory. Author Penny Lewis demolishes the mythology, and shows that working-class people were at least as opposed to the war as the middle and upper classes and that they played an indispensable role in the movement to end it, and that the black and Chicano movements were among the most militant antiwar voices. 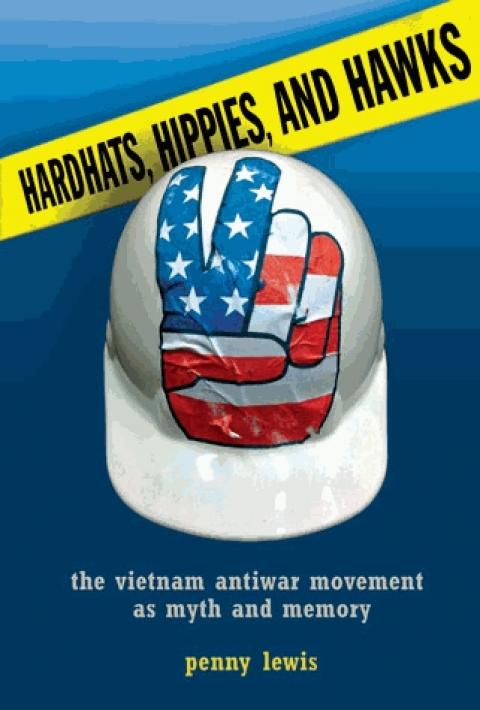 The U.S. movement against the Vietnam War was composed of grungy white college kids from privileged backgrounds who looked down on working-class people and spat on soldiers; the latter groups, in turn, despised the movement and staunchly supported the war. So goes the familiar historical narrative, pervasive in mainstream depictions and common even among observers sympathetic to the movement. In Hardhats, Hippies, and Hawks: The Vietnam Antiwar Movement as Myth and Memory, Penny Lewis demolishes this mythology, showing that working-class people were at least as opposed to the war as the middle and upper classes and that they played an indispensable role in the movement to end it.

After surveying opinion polls from the era, Lewis concludes that "working-class people were never more likely than their middle-class counterparts to support the war, and in many instances, they were more likely to oppose it." The "middle-class culture" of many student and pacifist groups, and their lack of outreach to workers, did initially deter the latter from joining organized antiwar efforts. But things changed by the late 1960s. Narratives that frame 1968 as the movement's peak are misleading, for after that year "the movement formed deeper roots among people of color, religious communities, labor unions, the armed forces, veterans and students" from working-class backgrounds. Moreover, although many formal organizations declined after 1969, the total number of participants in the movement continued to grow.

The black and Chicano movements were among the most militant antiwar voices. Most of the participants in these movements were of course working-class, even if class identity was not their primary basis for mobilization. These movements were the most effective at articulating the connections between U.S. imperialism in Vietnam and racism and poverty in the United States. Martin Luther King, Jr., in the last year of his life was the most visible such critic, condemning "the triple evils" of racism, militarism, and economic exploitation. Black and Chicano critiques of the war, like most working-class critiques, were rooted "in both morality and pragmatism": their opposition derived from a sense that the war was evil but also from the negative effects it had on their own lives. Lewis implies that antiwar movements should combine moral condemnation with appeals to the self-interest of exploited groups in the imperial center. King did so very effectively, identifying with the Vietnamese while also denouncing the victimization of soldiers, workers and the oppressed in the United States.

The most consequential resistance on the U.S. side was in the military, which was overwhelmingly composed of working-class soldiers. Defiance took many forms, including draft resistance, desertion, collective evasion of combat, attacks on officers and declining enlistment rates. While draft resistance was largely a middle-class phenomenon, "deserters were significantly more likely to be from working- or lower-class backgrounds," and from rural areas. Soldier resistance was tremendously important in compelling the U.S. withdrawal from Vietnam. In 1971 Fortune magazine warned that "dangerous shortages of men prevail in every branch of service, seriously impairing combat capability." The year before, such shortages led the Joint Chiefs of Staff to request an acceleration of the U.S. withdrawal. This resistance usually occurred outside the auspices of formal organizations. By going beyond an "organization-centered approach" to social movements, Lewis's account captures the diverse forms of resistance that helped end the war.

Soldiers and veterans also organized, though. The most impressive example was Vietnam Veterans Against the War, which by 1973 had 30,000 members. Although the affluent John Kerry is remembered as the iconic veteran dissenter, the group had - in the early 1970s - a mostly working-class membership. It also confronted domestic racism, unemployment, and other problems of concern to its constituency, in addition to its antiwar work. Lewis argues that the group "provides a template for what to do right if you want an active working-class base for a social movement organization."

Lewis also explains why the dual imagery of hawkish "hardhats" and privileged hippies has nonetheless dominated our collective memory. She details the consolidation of this myth in TV shows, movies, press reports, history textbooks, political speeches and even academic studies. The myth took hold in large part because it served pro-war voices in their efforts to discredit antiwar protesters.

Yet political usefulness is not the only reason for the imagery's persistence. Like all effective propaganda, the stereotypes were partly based in reality. The failures of the middle-class left were real. In the movement's early years, formal antiwar organizations were dominated by middle-class voices who "did not, by and large, speak to working-class concerns." Intellectuals like C. Wright Mills and Paul Goodman, who had great influence on the New Left, often dismissed U.S. workers as ignorant or reactionary. Conversely, the image of the hawkish worker was not entirely without basis. Many labor leaders shamefully supported the war, but racism and jingoism also had substantial roots in the rank-and-file.

The political relevance of this book is far-reaching, and not limited to issues of war and peace. Lewis is right that "memories about the U.S. war in Vietnam" have been central to "conflict about what `we,' in this country, are all about." She challenges the notion that white workers' enthusiasm for the Democrats has waned because of the party's identification with civil rights or gay marriage. Rather, the failure of the Democratic Party and most labor unions to pursue a strong pro-worker agenda has understandably caused many workers to question those institutions. Yet Lewis' account also suggests the potential for a progressive, anti-imperialist, multiracial movement of working people. That potential still exists, and the need is more urgent than ever.

[Kevin Young recently completed his Ph.D. in history at Stony Brook University. He has worked as a political organizer in a variety of contexts, including the labor and antiwar movements.]