She Worked Hard for the Money

SAG nominee Misty Upham speaks from experience when she stands up for domestic workers. 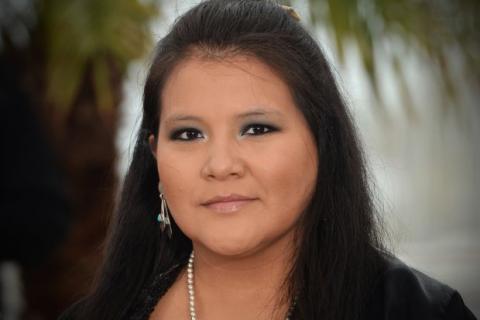 When my cell phone rang two years ago with news that director John Wells wanted me to audition for the film adaptation of August: Osage County, I was scrubbing a floor and up to my elbows in cleaning products and rubber gloves.

I rushed to silence the ringer and answered in a hushed voice. I was working in a home in Manhattan Beach and it was protocol never to take personal calls while working. My heart beating fast, I tried to absorb what my manager was saying. "Meryl Streep....Julia Roberts....George Clooney..."

After 20 years of theater training, a nerve-wracking move to Los Angeles, and countless auditions, this was as close as I had ever gotten to the "big leagues" of Hollywood. Could this be my big break?

Slow down, Misty. First, I had to get through the audition. Actually, first I had to get to the audition in a car running on fumes. I took a gamble, and used my last drops of gas to get to the casting office. After my audition, I waited on the curb for hours for a friend to bring me gas - the glamorous life of the working actor.

Most actors in Los Angeles, even those of us who you may vaguely recognize from a film or TV show, generally have very modest incomes. It's a secret kept alive by a media that equates all things Hollywood with decadence and fortune. In reality, many working actors live with considerable uncertainty, moving from job to job, often paid minimum fees, and if we're lucky, sporadic residuals. Health coverage is patchy, and the ability to focus solely on our craft is a luxury we simply can't afford. Most of us have "rent jobs" to make ends meet.

A the time when I received that life-changing phone call, I was paying my bills as a housecleaner. Any domestic worker will tell you that caring for people's homes and families is important work, but it's also physically and emotionally demanding work. There are good days and nice employers, who offer you ice water when you arrive on a hot summer day, a sandwich at lunchtime, cleaning products that aren't too toxic, and respectful conversation. I am lucky that on that day, my boss was one of these employers, and actually to this day, among the best employers I've ever had. These individuals make you feel human, and there are many of them.

And then there are bad days and really tough employers. People who insist you work all day and then refuse to pay you a fair wage, or deny you your wages altogether; the ones who fire you without cause or warning, or force you to work overtime with no additional compensation. Most painful are the employers who don't seem to see you at all, as if you are not human, less than them.

You feel invisible - that is, until they realize they've seen you before. ("aren't you that girl from Frozen River?")

Yes, I am - and I also count myself among the two million house-cleaners, nannies, and home health aides who work in homes across America. I couldn't have bought the gas to get to all those auditions without those jobs, and like most domestic workers, I'm proud of the work I did. Despite the lack of protections, the indignities, and in severe cases, the violence and abuse, we genuinely care about your homes, love your children and aging parents, and strive to do a good job.

That's what I hoped to convey when I landed the role of Johnna in August: Osage County, a young Native American woman who answers an ad for a housekeeper and caregiver for Violet Weston, a troubled matriarch played by Meryl Streep. I wanted to bring the humanity and dignity of this woman to the big screen.

Like most domestic workers, Johnna's job description quickly expands to include cooking, cleaning, and caring for a family of nine, all while dodging the storm of insults (and plates) that fly wildly between members of the Weston family. She's a live-in housekeeper, which means her employers assume, as is common, that she is available to work any time of day or night. Throughout the film, she is often silent, observing the struggles of the Weston family. There's truth in this: For many years, domestic workers have worked in relative invisibility - unseen, unprotected and undervalued. Most are excluded from basic federal and state labor laws that protect the rest of us from workplace abuses, wage theft, and unpaid overtime. And their work is not just practical, but emotional as well. Like Johnna, domestic workers often report for work during a family's most trying, intimate moments. Whether the need is for childcare as new parents navigate their emotional return to the workplace, or like the Westons, for elder care when a parent receives a difficult diagnosis, domestic workers provide positive solutions when families need them most.

Where the film's fiction and the real world diverge is in the way domestic workers today are changing their circumstances by organizing and mobilizing. Across the country, hundreds of thousands of workers are waging - and winning - campaigns to pass domestic worker bill of rights laws that restore basic labor protections to this vital workforce. In September 2013, the National Domestic Workers Alliance and Caring Across Generations - two organizations that I actively support and encourage you to explore - joined allies across the country in celebrating a historic victory when the Department of Labor updated its regulations to extend minimum wage and overtime protection to millions of the nation's homecare workers. This landmark change is just the beginning of the road to opportunity for this workforce. More is needed, including a living wage.

Whether or not you see the film, chances are there's a Johnna in your life: your mother, your nanny, the homecare worker who helps your grandmother get to her weekly bridge nights with "the girls." We owe it to them to join their fight for basic labor rights.

It's the role we were born to play.

[Misty Upham is an actor. She appears in the Golden Globe-, BAFTA- and SAG-nominated film August: Osage County and is currently nominated for a SAG Award for Best Ensemble Performance.]