I was pleased, and rather surprised, when I saw that the U.S. Department of Labor—in honor of its one-hundred-year anniversary—is assembling a list of books that shaped American ideas about work.DOL officials, after seeing a 2012 “Books that Shaped America” exhibition at the Library of Congress, were inspired to make a similar call for books about work in order to emphasize the “significant role published works have played in the shaping American workers and workplaces.” 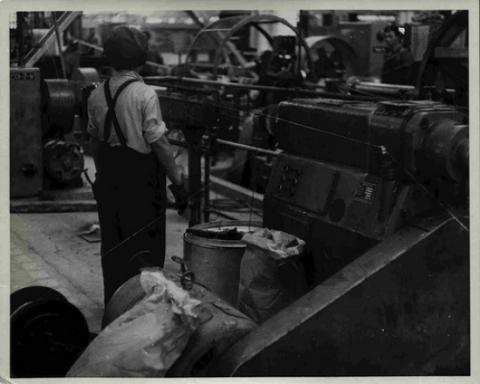 I teach American literature and media history at Carnegie Mellon University in Pittsburgh, and for many years I have taught a course called Capital Fictions—a class in which we examine the ways in which literature shaped, and was shaped by, the US economy at the turn-of-the-last-century. Though I never teach all of the same novels twice, we often read The Jungle, Sister Carrie, House of Mirth, and William J. Weldon’s Autobiography of an Ex-Colored Man. Of course, as a Marxist/Feminist/Public School Activist at Carnegie Mellon University, I often feel like an outlier—a radical humanist on Andrew Carnegie’s 21st century techno-robotic campus.

So I was pleased, and rather surprised, when I saw that the U.S. Department of Labor—in honor of its one-hundred-year anniversary—is assembling a list of books that shaped American ideas about work. DOL officials, after seeing a 2012 “Books that Shaped America” exhibition at the Library of Congress, were inspired to make a similar call for books about work in order to emphasize the “significant role published works have played in the shaping American workers and workplaces.”

In drawing attention to the DOL’s project on our blog, I am falling into the public relations trap expertly laid by Carl Fillichio, the senior advisor for public affairs and communications at the U.S. Department of Labor. While his book project seems progressive on the face of it, it has also been great public relations, as the mainstream media has done more than a dozen stories on the DOL’s project. Fillichio himself is a capitalist intellectual, coming to the DOL from Lehman brothers, where he was a senior vice president in charge of promoting the firm’s “thought leadership” and philanthropy.

The list of books that shaped American labor is long (102 so far) and eclectic, featuring such classics from children’s literature as Richard Scarry’s Busytown and Doreen Cronin’s radical story of barnyard animals that go on strike, Click, Clack, Moo. Some of my “Capital Fictions” are there, including The Jungle and Sister Carrie. Louisa May Alcott’s book, Little Women, is there (perhaps an odd choice, unless, like me, you decided to pursue the profession of WOMAN WRITER after reading it), along with the poetic Let us Now Praise Famous Men, and Walt Whitman’s Leaves of Grass. In addition to some radical works there are some classics that staunchly defend capitalism, including Ayn Rand’s Atlas Shrugged, William Bennet’s The Book of Virtues, and Milton Friedman’s Capitalism and Freedom.

It is worth asking how books like these have shaped our ideas about work. Take Sister Carrie, by Theodore Dreiser. This novel gives us the perspective a young woman, Carrie Meeber, who comes from a small Midwest town to the booming city of Chicago in the late 1800s. Carrie tires quickly of factory work, and we see her struggle to find and keep a job. But then we chart her good fortune as she lucks into a career on the stage. She ends the novel a Broadway celebrity—successful, but still unsatisfied. The novel makes my students wonder: what is the secret to happiness? Is it hard work? Is it good fortune? Is it the ability to buy pretty things? Or is it relationships, education, and a search for deeper meaning?

Another classic on the list is also about turn-of-the-last century Chicago, The Jungle. My students recoil at the story—so grisly it is hard to believe that everything that happens in the novel could happen to a single family. A powerful worker, Jurgis, is brought down by injury and prison time; his strong friend and relative, Marija, is reduced to prostitution after many hard years in the packing plants; Jurgis’s youngest relatives become haggard, and, eventually die from factory work, and Ona, Jurgis’s wife, is raped by her boss and later dies in childbirth. But the students find themselves immersed in Sinclair’s world, and they respond to it with intelligence. When I let them pursue creative assignments, as I did this last fall, one student made a brilliant version of Monopoly based on The Jungle, and another student made a movie trailer for the novel that emphasized the dramatic sweep of the plot.

My students at CMU are from privileged backgrounds, and they often enter the classroom cynical about the plight of workers in the present and uniformed about workers in the past. But I find that through the reading of stories they become more open and more critical—of both the past and the present. Stories like Sister Carrie and The Jungle help to nurture their empathy, give them deeper understandings of place, and allow them to dwell in different times.

What do you think should be on the list? The project is accepting suggestions for additions to its list until March of 2014.

I hope you will agree that we need stories about work in order to understand what work means to us today and what it has meant to us in the past. We also need these stories so can decide what work will mean—and be—in the future. As Karl Marx (none of whose books are yet on the list at the DOL) reminds us, “the point is not merely to understand the world, but to change it.”