The Anti-fracking Activist Barred From 312.5 Sq Miles of Pennsylvania

Court injunction brought in by oil and gas company makes even supermarkets off-limits for Vera Scroggins. 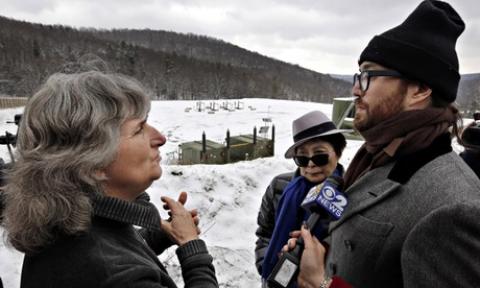 Vera Scroggins, an outspoken opponent of fracking, is legally barred from the new county hospital. Also off-limits, unless Scroggins wants to risk fines and arrest, are the Chinese restaurant where she takes her grandchildren, the supermarkets and drug stores where she shops, the animal shelter where she adopted her Yorkshire terrier, bowling alley, recycling centre, golf club, and lake shore.

In total, 312.5 sq miles are no-go areas for Scroggins under a sweeping court order granted by a local judge that bars her from any properties owned or leased by one of the biggest drillers in the Pennsylvania natural gas rush, Cabot Oil & Gas Corporation.

"They might as well have put an ankle bracelet on me with a GPS on it and be able to track me wherever I go," Scroggins said. "I feel like I am some kind of a prisoner, that my rights have been curtailed, have been restricted."

The ban represents one of the most extreme measures taken by the oil and gas industry to date against protesters like Scroggins, who has operated peacefully and within the law including taking Yoko Ono to frack sites in her bid to elevate public concerns about fracking.

It was always going to be an unequal fight when Scroggins, now 63, made it her self-appointed mission five years ago to stop fracking in this, the richest part of the Marcellus Shale.

Just how unequal became clear on 21 October when the case of Cabot v Scroggins came before a local judge, Kenneth Seamans, in the Montrose court house.

Cabot turned up with four lawyers and nine witnesses, employees of the company and the firm it hired to provide security. Scroggins represented herself. She told the court she had been unable to find a lawyer as the hearing had been called on 72 hours' notice.

By the time the hearing was over, the judge had granted Cabot a temporary injunction barring Scroggins from all property owned or leased by the company.

"It is hereby ordered that Ms Scroggins is restrained, enjoined and prohibited from entering upon property owned and/or leased by Cabot Oil & Gas Corporation including but not limited to well sites, well pads and access roads," the injunction reads.

The effect of that ban is far broader than the dry legal language would suggest.A fracking site owned by Cabot Oil and Gas Corporation in South Montrose, Pennsylvania. Photograph: Spencer Platt/Getty Images

In court filings, Cabot said it holds leases on 200,000 acres of land, equivalent to 312.5 sq miles. That amounts to nearly 40% of the largely rural county in north-eastern Pennsylvania where Scroggins lives and where Cabot does most of its drilling.

The temporary injunction granted on 21 October does not require Cabot to identify or map the lands where it holds drilling leases, putting Scroggins in the bizarre position of having to figure out for herself which areas were off-limits.

Cabot later offered to limit the scope of its exclusion order in court filings seeking to make the injunction permanent. The next hearing on that injunction is scheduled for 24 March.

Scroggins, who now has a lawyer, is fighting to overturn the injunction.

Until then, each trip Scroggins makes outside her home requires a calculation about whether her route will take her on lands or roads leased to Cabot, or a visit to the court house to pore over property records.

"We need a map. We need to know where I can and can not go," she said. "Can I stop here, or can I not stop here? Is it OK to be here if I go to a business or if I go to a home? I have had to ask and check out every person I go to: 'are you leased to Cabot'?"

Many of those businesses are, it turns out. Susquehanna County is one of the most active areas in Pennsylvania's natural gas rush. Eight of the top 10 most productive gas wells are in the county, according to an industry newsletter. All eight belong to Cabot.

Environmental groups say the court – and Cabot - went too far.

"It seems to be an extraordinarily heavy handed reaction by industry and one which was extremely out of proportion to what she has been doing," said Kate Sinding, a lawyer for the Natural Resources Defence Council.

Campaigners claim other over-reactions by industry and police against fracking opponents – such as the arrest last December of two protesters in Oklahoma for "terrorism hoax", after they unfurled a banner and dropped glitter on the floor of an office tower owned by Devon Energy.

But Scroggins' lawyer, George Kinchy, says this was the first time to his knowledge that a company has used the full weight of the law against a single activist.

He also said Cabot was lucky Scroggins was not represented by a lawyer at the hearing.

The company was not pressed to demonstrate the gas leases gave it the right to make such absolute decisions about access. "They have no proof that they had the right to exclude her. They didn't present evidence of leases that gave them the right to treat the property as their own," he said.

Anti-fracking activist Vera Scroggins, left, talks with Yoko Ono, center, and Sean Lennon at a fracking site in Franklin Forks, Pennsylvania. Scroggins is also a videographer and self-appointed guide to the gas patch of northeastern Pennsylvania, where she lives in a single-wide trailer near a lake. Photograph: Richard Drew/AP

Cabot refused several requests to respond, beyond a brief email statement from spokesman, George Stark. "Cabot has a policy of not commenting specifically on litigation to which it is a party," the statement reads. "That being said, Cabot supports an individual's right to free speech and regrets having to seek relief from the court in order to prevent Ms Scroggins from repeatedly trespassing on company property, where she could potentially jeopardise the safety of herself and others."

However, the company arranged for Tom Shepstone, a consultant who blogs at Natural Gas Now, to speak on its behalf. Shepstone said the injunction was overdue.

"I'm proud of Cabot and what they've done because they're saying we're not going to take this any longer," he said.

Cabot in court filings does not accuse Scroggins of violence or of causing harm to property, and she has never been arrested or charged with trespass. She has not chained herself to machinery, or staged sit-ins.

But Shepstone argued Scroggins had upset too many people to be tolerated. "I believe she is a public menace because what she does is she essentially trespasses not so much on property – though she does do that – but she trespasses on the soul of the community," he said. "She does not allow the people of this community any peace."

In the five years since fracking came to north-eastern Pennsylvania, Scroggins has been relentless in trying to exposing the risks associated with the industry.

Scroggins and her then husband moved to this very rural area of north-eastern Pennsylvania from Long Island, New York more than 20 years ago, when their children were small. After various careers, Scroggins, now a grandmother, considers herself a full-time activist.

She has visited frack sites – posting up to 500 videos on YouTube. She has called in health and environmental regulators at perceived violations, and she has organised bus tours of frack sites for anyone who is interested – from Yoko Ono and Susan Sarandon to visiting Canadian elected officials.

None of that activity by Scroggins or other activists was illegal, or presented a public danger, according to Jason Legg, the district attorney for Susquehana County.

"I don't recall any major protests or people trespassing on any property," he said.

Even by Cabot's own admission, in court testimony last October, Scroggins seems to have been more nuisance than danger. Her biggest and most repeated offence, according to court testimony, appears to have been parking her car on access roads – and at times even on the narrow public county roads – at angles that required the big water tankers to swerve around her.

Scroggins, who does not appear adverse to confrontation, was also insistent on talking to personnel on site. But in every instance cited by Cabot witnesses, she left the area within 5 or 10 minutes – sometimes after they threatened to call police.

By 2011 those repeat visits to gas sites made Scroggins public enemy number one, so far as Cabot was concerned.

Cabot's security contractor, Northeast Diversified Services told the court it had posted photographs of Scroggins in their guards' campers, and had been following the activist since 2011.

"Yes, we follow you, yes, from site to site," the company's vice-president, Thomas Tolan, told the court.

Scroggins wasn't winning friends in the community either. There are landowners in Susquehana County who have made money off leasing their land to Cabot and other gas companies for fracking. "The consensus is basically that it has been a lifeline to an area that was struggling," Legg said.

In a small town like Montrose, population 1,600, Scroggins' forceful brand of activism appears to have been too much for some – though she has a hard core of supporters.

In a recent visit to the court house to check on Cabot leases, she was scolded by a court official just for striking up a conversation with the person beside her at the counter.

A few minutes later, Thomas Meagher, the county solicitor, said Scroggins brought her legal problems down on herself by failing to following the "unwritten rules" of civilised discourse.

Scroggins rejects the idea that "nice" has anything to do with it. "I am doing this as nicely as I feel is warranted. I have other concerned citizen friends who play passive and they don't get anything done more than I do. They are just in the background," she said. "They are playing passive and nobody even hears about them. Those who want to play that womanly role, they can play it. I don't have to."

As for Cabot and her critics in the community, "They can just get used to it," Scroggins said.