Stateside Communists were the underdogs, fighting the establishment for justice - the victims of censorship and police repression, not its perpetrators. 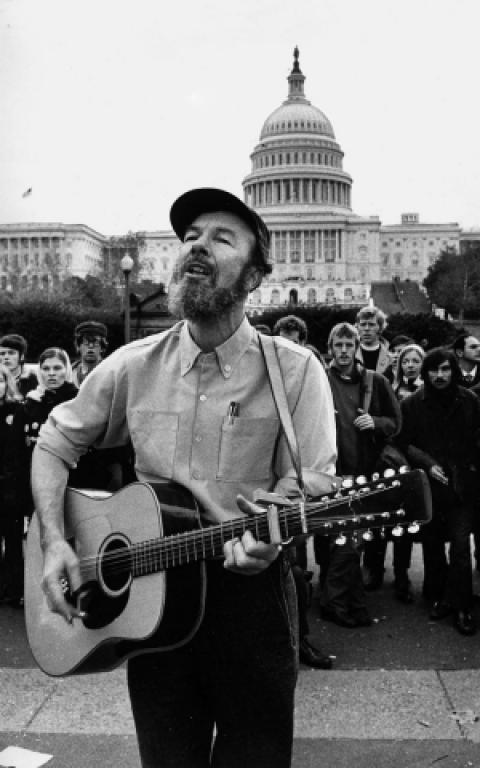 Pete Seeger at demonstration against the war in Vietnam, at the foot of Capitol Hill in 1969., Stephen Northup/The Washington Post/Getty Images

When the legendary folk singer Pete Seeger died Monday at the age of 94, remembrances of him, unsurprisingly, focused less on his music than on his social activism. All the better - Seeger, the epitome of tireless commitment to "the cause," would have liked it that way.

Some comments were laudatory, praising every aspect of his advocacy. But most of them struck the balanced tone of The Washington Post's Dylan Matthews, who tweeted: "I love and will miss Pete Seeger but let's not gloss over that fact that he was an actual Stalinist."

This point is not to apologize for the moral and social catastrophe that was state socialism in the 20th century, but rather to draw a distinction between the role of Communists when in power and when in opposition. A young worker in the Bronx passing out copies of the Daily Worker in 1938 shouldn't be conflated with the nomenklatura that oversaw labor camps an ocean away.

As counterintuitive as it may sound, time after time American Communists such as Seeger were on the right side of history - and through their leadership, they encouraged others to join them there.

Communists ran brutal police states in the Eastern bloc, but in Asia and Africa they found themselves at the helm of anti-colonial struggles, and in the United States radicals represented the earliest and more fervent supporters of civil rights and other fights for social emancipation. In the 1930s, Communist Party members led a militant anti-racist movement among Alabama sharecroppers that called for voting rights, equal wages for women and land for landless farmers. Prominent and unabashedly Stalinist figures such as Mike Gold, Richard Wright and Granville Hicks pushed Franklin D. Roosevelt's New Deal to be more inclusive and led the mass unionization drives of the era. These individuals, bound together by membership in an organization most ordinary Americans came to fear and despise, played an outsize and largely positive role in American politics and culture. Seeger was one of the last surviving links to this great legacy.

American communism was different during those years. It wasn't gray, bureaucratic and rigid, as it was in the U.S.S.R., but creative and dynamic. Irving Howe thought it was a put-on, a "brilliant masquerade" that fought for the right causes but in a deceptive, opportunistic way. But there was an undeniable charm to the Communist Party - an organization that hosted youth dances and socials, as well as militant rallies - that first attracted Seeger. One need only reread the old transcripts from his 1955 run-in with the House Un-American Activities Committee to see the difference between the stodginess of the interrogators and the crackling wit of the young firebrand.

Stateside Communists were the underdogs, fighting the establishment for justice - the victims of censorship and police repression, not its perpetrators.

Seeger, like other party members, came to regret the illusions he held about the Soviet Union. He apologized for thinking that "Stalin was simply a `hard-driver' and not a supremely cruel misleader." But he never abandoned his commitment to organized radical politics. Along with Angela Davis and other prominent former Communist Party members, he helped form the Committees of Correspondence for Democracy and Socialism, a democratic socialist group, in 1991.

Remarking on Seeger, Bruce Springsteen once said that "he'd be a living archive of America's music and conscience, a testament to the power of song and culture to nudge history along, to push American events towards more humane and justified ends."

In stark contrast to the role played by state socialists abroad, that's a good way to describe the legacy of the Communist Party at home, a legacy Seeger never recanted.

[Bhaskar Sunkara is the founding editor of Jacobin and a senior editor at In These Times.]