Same-Sex Marriage, Civil Rights, and the Legacy of Massive Resistance

The Oklahoma legislature may consider a bill to end government licensing of marriage entirely. The bill, which is part of a broader strategy to avoid same-sex unions throughout the state, calls to mind efforts by lawmakers in the 1950s to undermine federally-mandated desegregation by shutting down public schools in the American South. 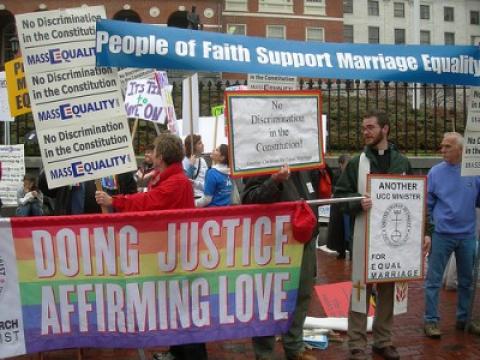 Last month, Oklahoma Representative Mike Turner announced planned legislation that would ban all  marriages in the state, in response to a court decision to allow same-sex marriages in Oklahoma.

Turner’s proposal came in response to a federal district court ruling that declared unconstitutional the state’s ban on same-sex marriage. U.S. Senior District Judge Terence Kern held that Part A of the 10-year-old amendment to the Oklahoma constitution, mandating that marriage in the state may exist only between one man and one woman, violates the Equal Protection Clause of the 14th Amendment by preventing same-sex couples from obtaining marriage licenses in the state.

“Supreme Court law now prohibits states from passing laws that are born of animosity against homosexual, extends constitutional protection to the moral and sexual choices of homosexuals, and prohibits the federal government from treating opposite-sex marriages and same-sex marriages differently,” wrote Judge Kern in the January 14, 2014 decision.  “There is no precise legal label for what has occurred in Supreme Court jurisprudence… culminating in Windsor in 2013, but this Court knows a rhetorical shift when it sees one.”

Though the decision awaits implementation, pending appeal, Turner has said that he and his conservative allies would seek to introduce this legislation to call into question whether there should be state sanction of marriage at all.  “[My constituents are] willing to have that discussion about whether it needs to be regulated at all,” Turner told state media outlet News 9.  Under Turner’s proposal, the Oklahoma government could abstain from granting licenses for all marriages.

This bill, and Turner’s broader strategy to avoid same-sex unions throughout the state, call to mind efforts by lawmakers in the 1950s to undermine federally-mandated desegregation by shutting down public schools in the American South.

In 1954, in the wake of the Brown v. Board decision that declared racial separation in schools to be unconstitutional, Senator Harry F. Byrd of Virginia embarked on a coordinated campaign to defeat desegregation.  That summer, Byrd and Virginia Governor Thomas Stanley created the Commission on Public Education, popularly known as the Gray Commission for State Senator Garland Gray, to explore possible statewide responses to Brown.

“If we can organize the Southern states for massive resistance to this order,” Byrd decreed on February 24, 1955, “I think that in time the rest of the country will realize that racial integration is not going to be acceptable in the South.”

This “Massive Resistance” became the rallying cry for Byrd’s charge.  In early 1956, the Senator joined together with 100 other politicians in signing the Southern Manifesto, declaring Brown to be an abuse of federal judicial power.

“This unwanted exercise of power by the Court, contrary to the Constitution, is creating chaos and confusion in the States principally affected,” the statement charged.  “It is destroying amicable relations between the white and Negro races that have been created through ninety years of patient effort by the good people of both races.  It has planted hatred and suspicion where there has heretofore been friendship and understanding.”

The Southern Strategy had significant consequences for the rights and freedoms of African Americans in southern states. As historian George Lewis writes, Civil Rights activists viewed the approach as “a multi-headed Hydra that had once faced Hercules. Its proponents developed a wide array of ploys, tactics, mechanics, and arguments in defense of the southern status quo.”  Even as federal courts ordered desegregation, the Byrd bloc exercised control over state laws directed at evading integration.

In November 1955, the Gray Commission put forth what would become known as the Stanley Plan, a series of proposals specifically targeting desegregation in state public schools.  The bills called for state control of pupil assignments on the basis of race and other sociological and psychological indicators; the automatic closure of any integrating public school (with authorization for such schools to continue to operate at a local level, without state funding); and the provision of educational vouchers for children from affected institutions to attend segregated private schools.

The Virginia government believed that the best way to prevent desegregation in schools was to shut down schools altogether.

After several months of political wrangling, Virginia residents voted to adopt the plan.  As Governor Stanley said in July 1956, “there shall be no mixing of the races in the public schools, anywhere in [the state].”

The Stanley Plan had broad effects on desegregation efforts throughout the state.  Though the Virginia Supreme Court of Appeals in 1959 overturned directives to close schools in Front Royal, Charlottesville, and Norfolk, by 1964, a decade after the U.S. Supreme Court struck down “separate but equal,” only five percent of schools across Virginia had integrated.

That same year, the U.S. Supreme Court effectively put an end to Virginia’s policy of Massive Resistance.  In Griffin v. County School Board of Prince Edward County, Justice Black wrote that both the closure of schools and the allocation of tuition grants, for the sole purpose of thwarting desegregation, violated the fourteenth amendment.  Four years later, in Green v. County School Board of New Kent County, the Court struck down “freedom of choice” laws (allowing students to choose between black and white schools) as unconstitutional based on the Brown ruling.

Though the Southern Strategy was ultimately defeated in the courts, the policies and practices that sprung from it had profound consequences for the struggle for racial justice in the United States.  We will now gauge the legacy of this Massive Resistance, as Representative Turner pursues a similar approach in Oklahoma’s battle over same-sex marriage.

Abigail Perkiss is an assistant professor of history at Kean University in Union, New Jersey, and a fellow at the Kean University Center for History, Politics and Policy.  Follow her on twitter at @Abiperk.