Nuns, landowners and environmentalists take on the union-backed Bluegrass Pipeline.

February 19, 2014 By Cole Stangler In These Times
printer friendly 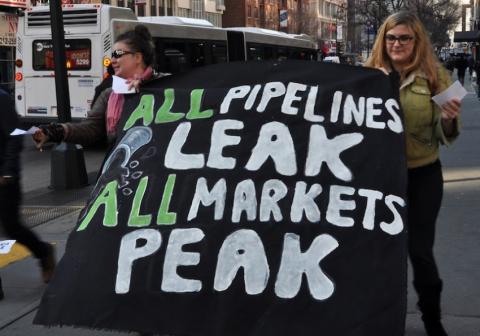 Similar to the Keystone XL pipeline, the proposed Bluegrass pipeline in Kentucky has met opposition from an unlikely coalition of environmentalists, religious groups and libertarians defending property rights. , Michael Fleshman/Flickr/Creative Commons // In These Times

Buff Bradley, a 50-year-old champion thoroughbred trainer, makes for an unlikely environmentalist. The son of Fred Bradley, who's a former Kentucky state senator, county judge, attorney, songwriter, pilot and horse-breeding icon, Buff has spent much of his life bringing up racehorses on his family's 300-acre farm in western Franklin County. If you like to brush shoulders with the owners of high-speed, million-dollar winning Kentucky thoroughbreds, there's a good chance you've heard the family name.

Buff didn't choose to take on the fossil fuel industry; the fight came to him. Last April, representatives from the Tulsa-based Williams Energy and Houston-based Boardwalk Pipeline Partners visited his family farm and asked to survey the land for a natural gas liquids pipeline. Bradley respectfully declined to cooperate and got in touch with neighboring landowners with whom surveyors had also paid visit.

But it didn't take long for Kentucky's Bluegrass Region to become the latest, if improbable, flashpoint in North America's pipeline wars.

Williams and Boardwalk quickly moved from surveying land to making offers for easements in order to construct the Bluegrass Pipeline, a jointly owned venture that would ship natural gas liquids over the 1,000 miles from the Marcellus and Utica oil-bearing shale deposits to Gulf Coast refineries. The companies want to lay much of the new pipeline in Kentucky - about 150 miles' worth - while reconverting old gas pipelines to complete the rest of the route from Kentucky to Louisiana. Meanwhile, environmental groups like Kentuckians for the Commonwealth and the state's Sierra Club chapter jumped into the fray, taking the side of the property-owners like Bradley who are unwilling to sell easements.

Driven by a mix of concerns over safety and property rights and bolstered by a dose of environmentalism, the opposition blurs ideological boundaries.

"I think lots of folks around here are kinda rubbed the wrong way by the thought that some out-of-state multibillion-dollar corporation could just come in, throw their weight around and take whatever land they want from folks to build this pipeline," says Sellus Wilder, a former city commissioner in Frankfort, the state capital, who's filming a documentary about the pipeline.

"In Kentucky, in particular, we seem to be a little," Wilder pauses, "I wouldn't say territorial, but I think we maybe value our ownership of our own land a little more deeply here."

A lot to lose, little to gain

The hazardous materials that it would carry, natural gas liquids, are a byproduct of gas drilling. Separated early on from the more commonly used natural gas product that goes toward electricity generation, most gas liquids, which include ethane, propane and butane, are used as feedstock for plastics and other petrochemical products. As the shale revolution barrels ahead in Pennsylvania, Ohio and West Virginia, energy companies are aiming to capitalize on the high profit margins these liquids fetch on the market.

There's just one major barrier. The chief processing and refining facilities, at least for now, are on the Gulf Coast, about 1,000 miles away from the Northeast's fracking heartland. But if companies can manage to get their product to export facilities in Louisiana and Texas, lucrative international markets await: the American Chemistry Council predicts chemical exports to rise by 45 percent over the next five years. Offering up to 400,000 barrels of daily capacity, the Bluegrass Pipeline would help fuel this boom.

The clear stakes of the fight - the pipeline offers large rewards to a small niche of the gas and petrochemical industries while offering little to the Kentucky corridor it would cross - helps explain the passionate tenor of opposition, says Deb Nardone, Director of the Sierra Club's Beyond Natural Gas national campaign, which, with its limited resources, has steered clear of the local fight so far.

"[Natural gas liquids] are not at all about domestic energy security," Nardone says. "It's about what's going to make the industry money. And that's what's started to bring non-traditional allies together, as they realize it's not in their personal benefit in the long run."

Indeed, the more that residents educated themselves about the project, the more the opposition's ranks swelled. Landowners didn't need to be experts in the political economy of natural gas liquids - or for that matter, even care about climate change - to conclude the pipeline presented little benefits for their home state.

"This is private companies doing this," says Buff Bradley. "It's not like it's gonna be something for us. I don't even want it close to me. I sure don't want to leave this earth and leave my kids to deal with it either."

Tom Fitzgerald, director of the Kentucky Resources Council, an environmental advocacy group that offers legal assistance, helped circulate information to concerned landowners about the state's lack of regulation over gas pipelines and the safety risks - two issues that have helped drive public outcry. Hazardous pipeline accidents are rare, but because of the dangerous substances being transported, any leaks and explosions that do occur can be catastrophic.

The non-traditional battle lines are reminiscent of those surrounding the Keystone XL, says Jane Kleeb, director of Bold Nebraska, which helped organize local ranchers and farmers against the pipeline before it became the environmental cause celèbre that it is today.

"For us, there was common ground in the property rights issues and eminent domain," Kleeb says. "That opens the door for us to engage in conversations with landowners about climate change and about fossil fuels and about Nebraska [getting] 80 percent [of its energy from] coal and how we need to be producing more renewable energy."

Unlike the Keystone XL, however, those latter types of conversations aren't driving the movement in the Bluegrass State. But not for lack of trying - green groups are increasingly in touch with landowners in an effort to broaden the politics of opposition. Activists from Kentuckians for the Commonwealth, for example, have pointed to the dirty pipeline proposal as evidence for the need to produce alternative, more sustainable sources of energy.

Those environmentalists also helped bring the movement to the streets: on Wednesday, hundreds rallied in Frankfort for the ninth annual "I Love Mountains Day." The rally, which is organized by Kentuckians for the Commonwealth, usually focuses on mountaintop removal. But this year, some of the speakers, like Sister Claire McGowan, a Dominican Sister of Peace, blasted the Bluegrass Pipeline. (Nuns from the Sisters of Loretto brought attention to the project last fall, when they refused to allow pipeline surveyors on their land).

In spite of these efforts, however, much of the opposition remains grounded in an old-fashioned, libertarian commitment to respecting private property rights, says Fitzgerald of the Kentucky Resources Council.

Of course, not everyone is opposed to the pipeline. Much like the proposed Keystone XL, heavily backed by the AFL-CIO's Building and Construction Trades Department, a slice of organized labor is siding with the energy industry.

There's no guarantee any of the estimated 6,000 construction jobs would actually go to members of any union. But Willoughby says the potential is good enough - swayed, one imagines, by Kentucky's 8 percent unemployment rate, which is eighth-highest in the nation. He's also unconvinced by the timeless green argument that unions shouldn't be gobbling up short-term gains at the long-term detriment of the planet.

"The people that work construction, all of our jobs are temporary," Willoughby says. "Every project has a beginning, every project has an end. When those projects begin they help those working families, they help their kids go to school, they help the economy around because they're spending more money and are able to pay their house payments and their car payments."

In the next few months, the pipeline's opponents are hoping that a pending lawsuit and upcoming state legislation can stick the final dagger into the heart of the project.

They've calculated that Williams and Boardwalk, struggling to secure the necessary easements, will eventually be forced to seize property using eminent domain. Kentucky state law is ambiguous on the matter: While the use of eminent domain is restricted to projects that have a "public use," the law doesn't explicitly prohibit private natural gas liquids pipelines from qualifying. The companies, for their part, have refused to promise they won't resort to eminent domain.

The state's Attorney General has already said he doesn't believe the pipeline would qualify. But to play it safe, Kentuckians United to Restrain Eminent Domain, represented by Fitzgerald, is asking the Franklin County circuit court to clarify whether the operators have grounds to invoke eminent domain.

Meanwhile, in response to pressure from landowners and environmentalists, the Kentucky Legislature is slated to move on a series of bills that would prohibit the pipeline operators from seizing private land. In the upper chamber, Jimmy Higdon, a Republican from Marion County, is sponsoring a bill that would limit the use of eminent domain to state-regulated utilities.

"Our opinion is they can't get across Kentucky without using eminent domain," Higdon tells In These Times. "We just want to make sure if a landowner says no, that no means no."

Higdon says he would rather not comment on any of the environmental issues. He is, quite emphatically, not attracted to this issue out of concern for climate change.

"I can't say that I'm on board," Higdon says. "I'm not convinced that [man-made climate change is] 100 percent a sure thing. I think there's some conflicting information on climate change and I'm not totally convinced yet."

When it comes to impeding development of the natural gas industry, though, activists in Kentucky will take whatever allies they can get. And environmentalists better get used to these sorts of fights, say Kleeb of Bold Nebraska and Nardone of the Sierra Club. As the gas industry seeks to move its products to foreign markets - whether it's LNG or NGL - that means more pipelines. And that, in turn, means more struggles like these.

"It is much more than just an environmentalist fight," says the Sierra Club's Nardone. "It's about an industry that's rogue and very little regulated trying to muscle its way into impacting people's lives."

[Cole Stangler is an In These Times staff writer based in Washington D.C., covering labor, trade, foreign policy and environmental issues. His reporting has appeared in The Huffington Post and The American Prospect, and has been cited in The New York Times. He can be reached at cole@inthesetimes.com. Follow him on Twitter @colestangler.]

Portside is proud to feature content from In These Times, a publication dedicated to covering progressive politics, labor and activism. To get more news and provocative analysis from In These Times, sign up or a free weekly e-newsletter or subscribe to the magazine at a special low rate.