A Southern Workers’ Movement Can Change the Nation

Unions can win in the South, and doing so is an essential part of the broader goal of defeating the reactionary political and economic agenda nationwide. The key is cultivating and mobilizing community support for workers’ rights to organize. 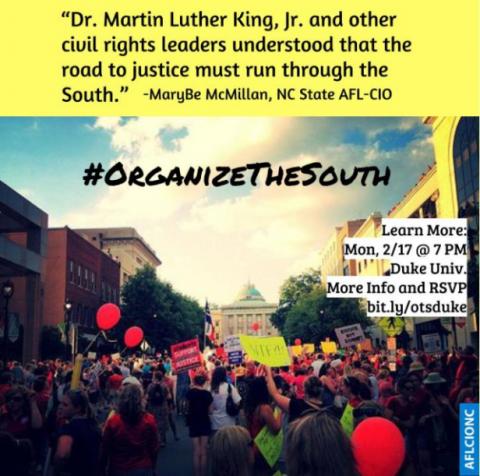 “Organize the South” was the call on Monday evening February 17 in Durham, North Carolina, where an overflow crowd gathered for a discussion on “How a Southern Workers’ Movement Can Change the Nation.” Worker advocates and adversaries alike have identified the South as a crucial battleground in the fight to reverse the long decline of the U.S. labor movement. This Fall, the AFL-CIO committed itself “to develop a Southern organizing strategy” as “one of its top priorities”. The UAW’s bid to represent workers at the Volkswagen plant in Chattanooga, Tennessee became a focal point in that fight, and the union’s narrow defeat in last week’s NLRB representation vote has led some to suggest–dolefully in the case of union supporters, cheerfully in the case of union busters–that a southern organizing strategy remains futile.

The panelists at Monday’s event in Durham rejected that pessimistic conclusion. Their common message was that unions can win in the South, and doing so is an essential part of the broader goal of defeating the reactionary political and economic agenda nationwide. The key to labor’s success in the South is cultivating and mobilizing community support for workers’ rights to organize and bargain collectively for better wages and working conditions.

The discussion began with three speakers who provided an overview of the historical and contemporary context for labor’s southern strategy. Chris Kromm, Director of the Institute for Southern Studies, reviewed the economic and political context. The South has the lowest rates of union membership and the worst concentration of poverty in the U.S. The two facts are intimately related, rooted in a well-established strategy of attracting business through a combination of economic incentives (essentially paying companies to relocate here, through tax abatement and other subsidies) and the lure of a low-wage, union-free workforce. Southern hostility to organized labor is also fueled by racism, with unions viewed with suspicion and fear as vehicles for African-American economic and political empowerment.

Yet, as Duke University historian Bob Korstad noted, the South has been the site of significant labor efforts dating back more than a century. Among the notable struggles, Korstad cited significant activity by the Knights of Labor and the Populist movement in the late 1800s, the child labor campaign and major strikes in the textile industry in the early 20th century, organizing among tobacco workers in the mid-20th century, the J.P. Stevens organizing campaign and boycott in the 1970s, and victories by the UFCW at Smithfield and the Farm Labor Organizing Committee (FLOC) in recent years. The role of women and African-Americans has been prominent in this history, a trend that continues today in the Moral Monday movement, and in the struggle of NC teachers against the anti-worker, anti-education agenda being pushed by the state legislature.

As both Kromm and Mary B. McMillian, Secretary-Treasurer of the NC AFL-CIO, observed, the South’s changing demographics, notably an influx from elsewhere in the US along with substantial immigration, mean growth in segments of the population, particularly African-Americans and Latinos, who are more likely to support unions (and less likely to vote Republican). These trends represent an opportunity for labor, and for the broader progressive movement, while posing a threat that has stoked fear and provoked strident opposition from corporate interests and reactionary forces.

The discussion continued with four presentations on current labor organizing efforts. Keith Ludlum of UFCW Local 1208 discussed the importance of community support in the long struggle and ultimate victory at Smithfield Foods. The union is similarly focused on cultivating and mobilizing strong community support in its current campaigns at the Mountaire Farms and Purdue poultry operations. Workers vote against their own interests, Ludlum observed, when they hear anti-union rhetoric from their neighbors and local politicians.

Unions must counter that rhetoric by getting their own message out through the community. Justin Flores, Vice-President of FLOC, noted the particular challenges involved in organizing farmworkers, who lack any protection under federal labor law, and many of whom are also vulnerable as undocumented immigrants. Despite these challenges, FLOC was able to follow a successful strike against the Mt. Olive Pickle Company with a ground-breaking collective bargaining agreement between the union and the NC Growers Association. In its current campaign on behalf of tobacco workers, FLOC has taken a new approach, targeting the R.J. Reynolds company, which sits atop the tobacco supply chain, and thus has the economic power to set standards for workers at the bottom of that chain. Again, community support is essential to the success of these efforts.

Zaina Alsous, an organizer with NC Raise Up, discussed the movement among retail and fast-food workers that has garnered national attention over the past year. This movement has departed from the traditional union organizing script of seeking formal certification through NLRB elections, opting instead for an approach that emphasizes direct action, including repeated walkouts and demonstrations at hundreds of workplaces around the country including many around the South. Already these tactics have produced results, including pay raises, recovery of unpaid overtime, and an increased focus on the problems of poverty and low wages.

Finally, Angaza Laughinghouse, President of the NC Public Service Workers Union, UE Local 150, discussed that union’s organizing among public service workers in North Carolina. Under state law, collective bargaining agreements between unions and public employers are illegal, as are strikes by public service workers. Despite these obstacles, UE150 has succeeded in organizing and winning improvements in wages and working conditions for its members. They have done so through rank and file workplace action, including strikes in some instances. UE150 is now helping to build the labor movement in the South through the Southern Workers Assembly, which emerged out of labor activity at the 2012 Democratic National Convention in Charlotte.

The event closed with a call to action. Attendees were urged to participate in upcoming events, organize labor speakers in their local communities, connect with the AFL-CIO and other organizations involved in Southern organizing, and promote the goal of organizing the South through social media. Questions and comments from the audience reflected optimism and enthusiasm about that goal, suggesting that the setback in Chattanooga had not dampened the spirit of Southern labor advocates.

[Eric Fink is an Associate Professor at Elon University School of Law in Greensboro, North Carolina. He is also a fly-fishing enthusiast and a guitarist.]