Progressive analysts note that proposed cuts to boots on the ground-style forces will not weaken US's global hegemony. 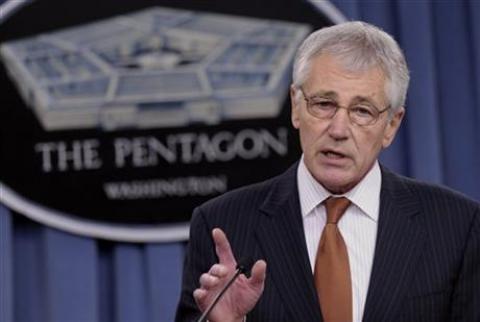 In a speech at the Pentagon Monday, Secretary of Defense Chuck Hagel announced new budget proposal to "shrink" military to pre-WWII numbers., AP

In a speech at the Pentagon on Monday, Defense Secretary Chuck Hagel announced a new budget plan that calls for the reduction of total soldiers across the U.S. military. But analysts say that although less troops on the ground in foreign countries would be a welcome development, the news highlights well-known plans for the U.S. to maintain its global military dominance by shifting to a more secretive, nimble, and technologically advanced force structure.

"In essence what you are seeing is the financial part of the changing face of empire," said Tom Englehardt, noted foreign policy expert and editor of TomDispatch.com, in an interview with Common Dreams.

Hagel's address follows a leak of the budget announcement published in the New York Times over the weekend.

Phyllis Bennis, fellow at the Institute for Policy Studies, also told Common Dreams that the budget—on the one hand—reflects the "pragmatic recognition" that our military costs are unsustainable, particularly in the midst of huge economic downturn. And, "on the other hand, is a highly ideologically-driven decision rooted in transformation of the nature of war. Wars are not ending [but they] are being transformed from large-scale invasions and occupations—Iraq and Afghanistan—to much smaller scale Special Ops- dominated wars."

Following "two disastrous interventions which have been very, very costly," Englehardt added that the cuts reflect "the perfectly obvious and brain-dead thinking in Washington."

During the address, Hagel detailed the Department of Defense budget proposal for fiscal year 2015 and beyond. The budget calls for troop reductions in every department of the U.S. military, including civilian personnel. The number of active duty Army soldiers will be slashed 13 percent from its current 522,000 soldiers to between 440,000 and 450,000, which would make it the smallest since just before the U.S. entered World War II.

However, special operations forces, he noted, will increase by 6 percent totaling roughly 69,000 personnel.

"Conceptually, what's being cut is the idea of large number of troops on the eurasian landmass," said Englehardt. In place of the kind of wars in Iraq and Afghanistan, he added, we will be seeing more of a "different kind of intervention" with a "heavy emphasis on the 'secret military' or special operations."

"CIA, NSA—you dont see any of that stuff going," Englehardt added. "I think that global surveillance and intervention state you see being built is going to stay."

In addition to the troop cuts, the budget recommends the retirement of a number of aging and outdated military vehicles. However, according to Englehardt, what is most "striking" is the Pentagon's decision to maintain the fleet of 11 aircraft carriers.

"That is a massive investment," he added, saying that it is "obviously excessive" for the U.S. to maintain roughly five times more the number of aircraft carriers than any other nation. The real message, he says, is that the U.S. has made the strategic decision to cede control of the land and instead "control the sea and sky."

According to Bennis, "Any cut back to the military spending and size should be celebrated. But we should celebrate it in the context of reaffirming our commitment to continuing to struggle against all forms of war, whether large-scale ground ops or special forces."

"As practiced by the U.S. they are all illegal, immoral, and do not make us or people in countries safer," she concluded.

Sarah Lazare contributed to the reporting in this piece.