The Criminal Justice System on Trial in Illinois

The case of Police Officer Howard Morgan in Chicago has put the whole criminal justice system on trial. 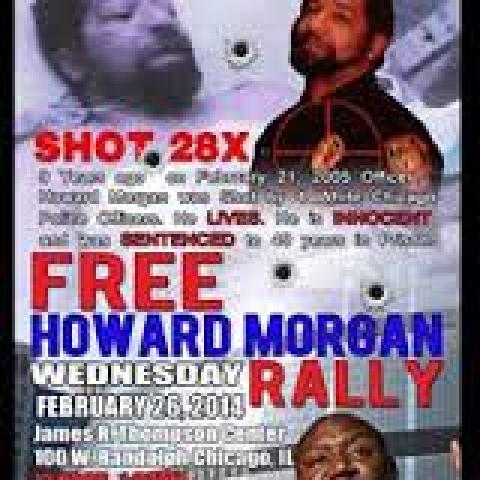 Howard Morgan was shot more than two dozen times by Chicago police and survived. He is behind bars after being convicted of attempted murder in the 2005 shooting. Protestors want his conviction overturned.

Morgan was convicted of attempted murder of the police officers who arrested him after two trials. His supporters say that second trial never should have taken place because of double jeopardy laws.

At the time of the shooting, Morgan was a 52-year-old railroad police officer who had previously worked for the Chicago Police Department.

"I'm not supposed to be here, being shot 25 times throughout my entire body- front, back, every spot except my head," Morgan said in November 2005. "It's only a miracle."

Ten months earlier, Chicago police officers shot him 28 times during a traffic stop on the West Side. Police claimed Morgan struggled, grabbed a gun and fired at officers first.

Almost nine years later, Benjamin Crump, an attorney for the family of Trayvon Martin, a Florida teenager who was killed by a community watch volunteer, is involved in Morgan case.

"Twenty-eight shots couldn't kill him, but it was the 29th shot fired by the criminal justice system -- that left a stinging blow," Crump said.

Crump, Morgan's public defender, and others hope the Illinois Supreme Court will review the case. There's the double jeopardy issue and, they argue, they were unfairly blocked from polling prospective jurors about their feelings on whether some Chicago police officers have a bias against blacks.

"At the end of the day, the Illinois Supreme Court has to look at Harold Morgan and his history versus the Chicago Police Department and its history," Crump said. "Mr. Morgan has always maintained he was stopped for driving while black and 28 bullets later could not kill him. God left him on this earth for a reason."

"I do try to keep his spirits up and let him know the world is listing to this injustice and he will be set free," Rosalind Morgan, wife, said.

Morgan is now in his 60s and serving a 40-year prison sentence downstate. His wife says he is permanently disabled from being shot 28 times.

The Chicago police officers involved in the shooting say Morgan fired 17 shots and injured three of them.

The Criminal Justice System On Trial In Michigan

It’s up to Gov. Pat Quinn to decide

The case of Police Officer Howard Morgan in Chicago has put the whole criminal justice system on trial.  Morgan has been sentenced to 40 years in prison after he was framed up on a charge of attempting to murder four while police officers.  These officers tried to kill Morgan after they stopped him for an alleged traffic violation.  They shot him 28 times – 21 times in the back as he lay prone on the street, and 7 time in the front and side.  It was late at night on Feb. 21, 2005, and he was “driving suspiciously,” they said.

Morgan was 55 years old when this crime took place.  He is now 63.  He’ll be 101 years old when his sentence is up.  He is severely disabled as a result of the police shooting, has high blood pressure, and it’s highly unlikely that he’ll ever see blue sky again unless Gov. Pat Quinn acts quickly to grant him executive clemency.

In 2007 Morgan was tried and found Not Guilty of ever firing his weapon by a jury.  Two jurors told the judge, Clayton Crane, that they could not continue deliberating.  Even though Morgan and his attorneys asked that the remaining 10 jurors be allowed to continue deliberating, the judge declared a mistrial.  State’s Attorney Anita Alvarez decided to retry Morgan on the remaining charges, even though they all involved his having fired a gun, and even though the jury had declared him Not Guilty on that charge.  Morgan’s attorneys appealed on the grounds that to retry him violated the double jeopardy clause of the Fifth Amendment to the U. S. Constitution, but the Appellate Court denied their appeal.  Neither the Illinois Supreme Court nor the U. S. Supreme Court would hear his further appeals from that decision.

The facts of the case are simple.  Morgan was driving to his family home on Chicago’s West Side after midnight on that very early Monday morning.  He was stopped by two marked police cars containing four young white officers.  Morgan says he identified himself as a police officer.  He says the white officers pulled open his door, pulled him out and threw him to the ground.  One of them saw the gun he carries for his job and yelled “Gun!  Gun!  Gun!”, and they all started shooting.  They took cover behind their respective squad cars, firing at Morgan from opposite sides.  Two of the officers took bullets with minor wounds.  Morgan took 28 and almost died.

Charice Rush, a young woman who had never met Morgan and who was sitting with her cousin in a car kitty-corner from Morgan’s car saw the whole thing.  She said she never saw Morgan holding a gun, or firing a gun.  The police pressured her not to tell what she saw, and she left town for a while.  But she ultimately came forward and testified at Morgan’s trials.

The police said that Morgan had been driving the wrong way on a one way street with his lights off.  They said that they followed him for three blocks going the right way.  They said they turned on their flashing lights, and that when he stopped he got out of his car.  They said they all had their guns in their hands, in the “ready” position.  While they patted Morgan down, they said, he pulled a gun from his waistband and started shooting at them.

The case boils down to which story do you believe.  Howard Morgan’s?  Charice Rush’s?  Or the Four young white cops who had to cover up their crime of attempting to murder a man who was driving while Black less than a block from his home?

Judge Crane, in the second trial, made numerous errors, all of which are being appealed.  The fundamental error of retrying Morgan after a jury found him Not Guilty of firing his weapon will be taken to the Illinois Supreme Court, and if necessary, the U. S. Supreme Court.  He may ultimately prevail on these appeals.

But let’s take a step back.  On its face, the evidence against Morgan is overwhelming.  Four police officers say he tried to kill them.  He says he didn’t.  The only eyewitness says he didn’t.  There is no other evidence.  The only way this case can be resolved is to look at the other facts that surround it.  Those facts point to a criminal justice system so steeped in racism and white supremacy that it is incapable of delivering a just outcome without outside intervention.  That’s why Gov. Quinn must intervene.  The integrity of the system is on the line, and it is crumbling fast.  Only through the Governor’s intervention can the system hope to retain any credibility.

Let’s look at the broader facts.

·         Between January, 2009 and October, 2013, seventy-two African American and Latino men were killed by gunfire from Chicago Police Officers.  Most were shot in the back.  Most were unarmed when they were shot.  Only one police officer has been charged in any of these shootings, and he has yet to be brought to trial.

·         Nation-wide a leading cause of death among African American police officers is being shot and killed while they were off-duty by white police officers, who assume that a Black man with a gun is a criminal.

·         Sitting on the Appellate Court that rejected Morgan’s appeal is Justice Margaret Stanton McBride.  McBride was an Assistant State’s Attorney who took the “confession” of robbery suspect Derrick King in January of 1980.  King had been brutally beaten by detectives, including Robert Dwyer.  Dwyer’s sister years later swore that her brother had told her, in the presence of Jon Burge, that in dealing with "niggers" they "beat the shit out of them, they throw them against walls, they burn them against the radiator, they smother them, they poke them with objects, they do something to some guys' testicles."  The victim of the robbery of which King was being accused, said that in a line-up he could see that King was severely bruised.  But McBride saw none of this.  She heard none of King’s screams as he was being tortured.

·         Or consider the lead prosecuting attorney against Morgan, Daniel R. Groth, Jr.  The year that Groth was born, 1969, his father led an FBI-CPD-State’s Attorney raid on an apartment occupied by members of the Black Panther Party on the West Side.  Fred Hampton and Mark Clark were killed.  Daniel R. Groth, Sr., lied before a grand jury about what happened.  He said the cops had fired in self defense.  The evidence proved the Panthers had not fired a single shot.  Fred Hampton was murdered by Groth in his bed as he slept, drugged the evening before by a CPD-FBI agent provocateur William O’Neal, who had infiltrated the Panthers as part of the infamous COINTELPRO Program.  Daniel Groth, Jr., grew up at his father’s knee.

Howard Morgan is a Deacon of his church.  His sister-in-law is a church bishop.  He has never been accused of any crime his entire life, except for this one.  He and his wife of many years, Rosalind, have three daughters and several grandchildren.  Can you believe that this man, himself a 21 year police officer, was stupid enough to start shooting at four other officers who had drawn their guns already,  at 1:00 am?

One would have to be blinded by racist white supremacy to not see that this is a case of racial profiling, a case of a police crime, a racist attempted murder, and a racist cover-up of the crime.

So, Gov. Quinn, will you allow yourself to see the truth?  Will you dare to do justice in this case and free Howard Morgan before prison life suffered as a result of a police frame-up kills this outstanding community leader?  It’s really up to you, because Howard Morgan may not have enough years left to wait for the molasses-like wheels of the criminal injustice system to render their verdict.  And the racist cards are stacked against justice in this, and so many other cases.

So the question is can this system be saved from itself?  Or will the people have to organize and rise up and vote to sweep the racists and the corruption away?  Cook County State’s Attorney Anita Alvarez could end this crime by dropping her objection to Morgan’s appeal and refusing to retry him.  But this is the SA who refuses to prosecute any cops for murder, even when the murder is recorded on a police car dash camera, as in the case of Flint Farmer.  So ultimately, it’s up to you Gov. Quinn.  Will you do the right thing?