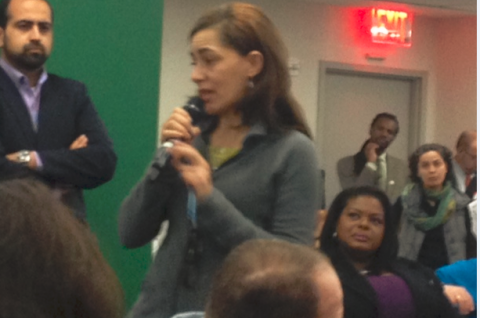 Obscured in the furious rhetoric of the charter propaganda machine, bewailing how three Success charter co-locations were reversed, is how 36 out of the 45 co-locations approved during the last few months of the Bloomberg administration have been allowed to go forward.  Here is a list.

While fourteen of these co-locations are for charters, twenty two are for non-charter schools. Five are for Success Academy charters.  All of these co-locations, charter or not, will negatively impact the existing public schools, whose students will be squeezed out of the space they need for a quality education.

In fifteen of the co-locations, the building will be pushed to 100% utilization or higher, while all of these buildings would likely register above 100% if the DOE's enrollment projections were accurate and if the school utilization formula was properly aligned with the real needs of children, including smaller classes, a full complement of art, music and science rooms, and access to the cafeteria at a reasonable time of day.

Indeed, every one of these co-locations will push class sizes upwards and/or prevent future efforts to reduce class size.  Class size is now at a 15-year-high in many grades, despite the fact that the state's highest court held that smaller classes are necessary for NYC students to receive their constitutional right to an adequate education.

These co-locations will also hamper efforts to expand preK, prevent  students with disabilities from receiving their mandated services in dedicated spaces rather than hallways or closets, and cause schools to lose their art, music and science rooms and/or be able to schedule lunch at a reasonable time.

These co-locations will also waste millions of dollars in precious funds, by replicating bureaucracy and out of classroom positions, as the numbers of classroom teachers continue to decline.  In none of the approved co-locations were Community Education Councils, the elected representatives of public school parents, properly consulted before the proposals were made -- and in no case, did Chancellor Farina consult these bodies before deciding the 36 co-locations should go forward.

These were the main points made in the lawsuit filed in December by Advocates for Justice, on behalf of Class Size Matters, the NYC Parents Union, Public Advocate Letitia James, Speaker Melissa Mark Viverito. These issues have been ignored by the mainstream media, which instead has focused ad nauseum on the alleged grievances of the deep-pocketed charter lobby, with all the wealth and the power of the hedge-funders and privatizers behind them.

On Saturday,  Public Advocate Tish James held a Town Hall meeting for CEC members and parents at the affected schools to ask them whether the lawsuit should continue, and the vote was unanimous that it should.

It was the best meeting I can remember in over 15 years of education advocacy, with parent after parent explaining with passion and in detail why these co-locations should never have been approved, describing the negative impact on their children's schools and the way in which their input had been ignored and the public engagement process deeply flawed. Throughout, Tish James listened carefully, was responsive and took notes.

Many of the parents at the affected schools as well as the majority of CECs participated, who represented hundreds of schools with hundreds of thousands of students.  In every case, they explained how the educrats at DOE's Portfolio office had informed them at the "early engagement sessions" that new schools would be inserted in their buildings, whether they liked it or not.

But the entire process carried out by Portfolio has been corrupt and illegitimate from the start, as Tory Frye of CEC 6 pointed out, including the fundamentally inadequate community engagement, incomplete and deceptive Educational Impact Statements, and erroneous and manipulated enrollment projections. In some cases, DOE claimed there is excess space where children are still being educated in trailers; in at least one case, Richmond Hill HS, they are moving students into trailers to make room for a new school.

Indeed, these decisions were engineered by Marc Sternberg who headed DOE's Office of Portfolio until he moved over to the Walton Foundation shortly thereafter-- an organization whose primary goal is to privatize our public education system.

Unfortunately, the officials appointed by Sternberg at Portfolio are still there, justifying their wrong-headed policies with the same arrogant indifference to community input, as well as to the overwhelmingly negative impact their decisions will have on NYC children.  In fact there are twenty five more co-locations now posted for a vote in May that were never proposed by the previous administration, but presumably were in Portfolio's pipeline when Bloomberg and Sternberg departed -- including a charter school co-location that will create an official utilization figure of  141%.

What's particularly disappointing is that Chancellor Fariña has admitted publicly that the DOE's official "Blue Book" figures on utilization understate the actual level of overcrowding in schools, and has appointed a task-force to revamp the formula.

Two of the members of this DOE taskforce were at Saturday's meeting, Shino Tanikawa, President of the Community Education Council of D2 in Manhattan, and Tesa Wilson President of the CEC in District 14 in Brooklyn, and both voted to support the lawsuit.

What Fariña should have done is suspended all future co-locations until the work of that task force could be completed.

If you'd like to get a sense of some of the testimony yesterday, please check my tweets @leoniehaimson. Nick Fox of the NYTimes tweeted the following:
Unfortunately, the NY Times did not send a reporter and as usual is MIA.  The only paper to report on the event, ironically enough, was the NY Post, which predictably focused solely on the charter co-locations and how the lawsuit might interfere with their lotteries.

Please sign our letter below in support of lawsuit going forward, as well as in support of the Public Advocate and the Speaker, who are standing up for our kids and putting themselves in the line of fire of the tabloids,  the charter lobby and the privateers behind them.

Just send your name, school/district, and position if any, to info@classsizematters.org if you want to sign onto the letter below; if you believe that public school kids deserve the right to a quality education, with small classes, a well-rounded education, and to be educated in real classrooms rather than trailers and eat lunch at a reasonable time, rather than 9:45 AM in the morning.

This blog is edited by Leonie Haimson, the Executive Director of Class Size Matters and a NYC public school parent for 15 years. If you'd like to write for the blog, please email us.

WE NEED YOUR CONTINUED SUPPORT!

Let us begin by thanking you for your longstanding support of all public school students and all public school parents.  You have been outspoken supporters of parents and teachers having key input into shaping the schools our children attend.  You have been outspoken supporters of reducing class size, alleviating school overcrowding, and working to implement our children’s right to a sound basic education.  Unfortunately, despite the change in administration, we continue to need your assistance in achieving these goals.

Under the administration of Mayor Bloomberg, the Department of Education pursued a reckless program of closing schools and starting new small schools and charters, and inserting them into existing  buildings were schools were already located, oblivious to their impact on students and the existing schools and programs.

The DOE under Bloomberg ignored the nearly unanimous complaints of parents and the objections of administrators and teachers, and approved hundreds of co-locations that caused more overcrowding, the loss of critical classroom space, as well as art, music and science rooms, caused children with disabilities and learning issues to be pushed out of the rooms required for their mandated services.  The creation of hundreds of new schools also caused a sharp increase in administrative spending and bureaucracy, concurrent with a sharp decline in the number of classroom and a sharp increase in class size.

In October and November 2013, the administration pushed through 45 co-locations in two meetings of the PEP, ignoring the input of communities and the harmful impact of these proposals on students and school communities.

We were thrilled when you, along with others, sued to void this massive round of co-locations, and waited patiently, as you did, with the hope that Mayor de Blasio would reverse most if not all of these plans.

He has not done that, and instead chose to go ahead with 36 of these proposals, which will have devastating effects on existing schools.   At least 12 of these proposals would push the building at or above 100% utilization, according to the DOE’s own figures.  If the Blue Book formula was accurate and pegged to reasonable class sizes, as well as sufficient space for special education services, art rooms, music and science, as well as adequate access to lunchrooms, libraries, and gyms, every one of these co-locations would be seen as pushing the existing schools into unacceptably overcrowded conditions.

This is why all of these co-locations must be reversed.

We urge you to proceed with your lawsuit and to see that the process going forward adheres to the law.  We pledge to join you in that effort.