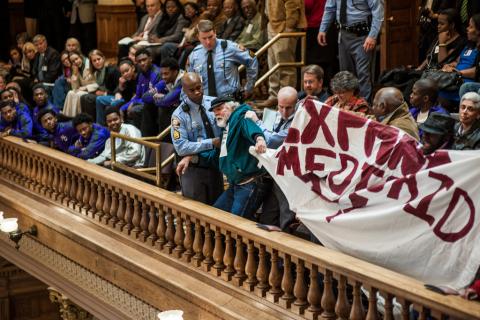 Moral Monday Georgia, an activist group, disrupted a session of the Georgia State Senate on Tuesday with waves of civil disobedience aimed at blocking consideration of a bill to prohibit Medicaid expansion. , Mike Belleme for The New York Times

ATLANTA — There was a son of a sharecropper and an advocate for the homeless, a college student and a great-grandmother, a retired store manager and the senior pastor of Ebenezer Baptist Church.

By the end of the day, they were among the 39 people who were arrested Tuesday during choreographed waves of civil disobedience here at the state Capitol in protest of the state’s refusal to expand Medicaid as part of the Affordable Care Act.

They shouted slogans and unfurled banners from the Senate gallery, sang spirituals in the marble rotunda and held a sit-in blocking the entrance to the governor’s office.

The Moral Monday movement, which began last year in North Carolina, took firm root in Georgia on Tuesday, where the arrests at the Capitol were the group’s boldest action since it started protesting here in January. There were similar protests in South Carolina, where a smaller but persistent campaign of civil disobedience played out for the third week in a row.

The movements are rare stirrings of impassioned, liberal political action in a region where conservative control of government is as solid as cold grits and Democrats are struggling for survival more than influence.

The question raised by all three groups, which have echoes in at least four other states, is whether they can become more than an outlet for protests by liberal activists who feel shut out of state politics.

Proponents insist they are building a movement and are in it for the long haul.

“We are at the beginning of a new Southern strategy,” says Tim Franzen, 36, the lead organizer behind Moral Monday Georgia. “The changes we need to make in Georgia to transform the state are going to take years. But with the changing demographics of the South, our victory is inevitable. This train has left the station.”

If so, it may be a long, hard trip. While some supporters see a movement in its early stages, others, even many who are sympathetic, see an exercise in futility on the wrong side of the state’s political and cultural divide.

“The South belongs to the right wing,” says Ray Strother, 73, who has managed dozens of prominent political campaigns for Democrats across the South. “Moral Monday was just born out of frustration. It is a desperate battle for political relevance.”

Those odds did not dampen the fervor of the activists in Atlanta on Tuesday. Shortly after the State Senate opened for business, four people in the gallery leapt up, shouting and holding a banner saying “Expand Medicaid now.”

The protesters were handcuffed, charged with disrupting official business, and taken to the Fulton County jail. When the session was gaveled back to order, another group repeated the action, then another.

After lunch, the Rev. Dr. Raphael G. Warnock, the senior pastor of Ebenezer Baptist Church, the longtime pulpit of the Rev. Dr. Martin Luther King Jr., led 11 protesters to the governor’s office, where they blocked the entrance until they, too, were arrested.

While these groups embrace a variety of liberal issues, from public education to voting rights, the focus in Georgia and South Carolina on Tuesday was Medicaid expansion. Both states have turned down federal funds to finance expanding the program under the health care law.

In South Carolina, 17 members of the Truthful Tuesday coalition were arrested outside the Statehouse in Columbia, the group’s largest action, bringing its total arrests to 39 over the last three Tuesdays.

“These folks are doing the service of drawing attention to it in a very crude way,” said Dick Harpootlian, a former chairman of South Carolina’s Democratic Party. “Getting plasticuffed behind your back, you’re not going to have a very deep discussion of the issues, but you do get attention.”

In Atlanta on Tuesday, as protesters disrupted the Senate session for the fifth time, State Senator Frank Ginn, a Republican, referred to them as “fecal matter.”

If any of these groups can claim to have budged the political needle, it is North Carolina’s. Its coalition started seven years ago under a Democratic administration and claims credit for successfully pressing for several laws, including the Racial Justice Act, which allowed death-row inmates to challenge their sentences if they could prove that race was a significant factor in imposing it.

That law and others were repealed after the state elected Pat McCrory, a Republican, as governor in 2012, liberating an already Republican-majority legislature. Since then, a state once known as one of the most moderate in the South has become a virtual laboratory for Tea Party-style policies.

Last April, the N.A.A.C.P.-led coalition started the weekly protests at the Statehouse in Raleigh known as Moral Mondays. Nearly 1,000 of its protesters were arrested last summer, and a rally last month there drew more than 80,000 people.

Polling suggests the protests may be having an effect. A series of polls by High Point University show approval ratings of Mr. McCrory and the state legislature plummeting since the governor took office, though the polls do not identify the cause. “We can assume it had something to do with the agenda,” said Martin J. Kifer, a political scientist at the university and the poll’s director. “It stands to reason that part of the promotion of that agenda was something the Moral Monday protests played a role in.”

With the legislature out of session, the group has continued weekly meetings across the state and this summer plans to send volunteers to 50 counties in a voter registration and education drive, part of a multipronged effort to counter a restrictive new voting law, which is also being challenged by the Justice Department.

Perhaps most noteworthy, the model is proliferating, with new groups forming in Florida and Alabama as well as Wisconsin and New York.

In Atlanta, after the political theater ended Tuesday, lawmakers adopted the Medicaid bill the protesters had come to oppose, which reinforces the state’s decision not to expand the program. Moral Monday took place on Tuesday this week because the legislature was closed on Monday for St. Patrick’s Day.

There was no indication that the disruptions changed a single mind, feeding the argument that the whole movement is a quixotic quest. To that, however, Hodding Carter III, a former assistant secretary of state and now a public policy professor at the University of North Carolina at Chapel Hill, says compared to what?

“It is a long haul,” he said, “and the only way to stay on the long haul is to keep sounding the bugle.”