So up to now, I have remained speechless in the face of what appears to me to be utter madness. 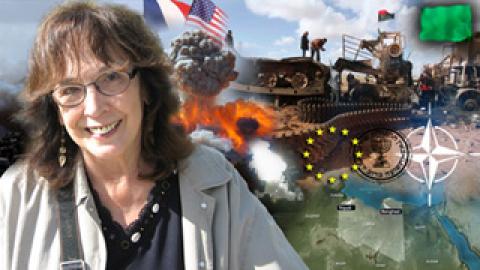 Five years ago, I wrote a paper for a Belgrade conference commemorating the tenth anniversary of the start of the NATO bombing of Yugoslavia. In that paper I stressed that the disintegration of Yugoslavia had been used as an experimental laboratory to perfect various techniques that would subsequently be used in so-called "color revolutions" or other "regime change" operations directed against leaders considered undesirable by the United States government.

At that time, I specifically pointed to the similarities between the Krajina region of former Yugoslavia and Ukraine. Here is what I wrote at the time:
_____

Where did the wars of Yugoslav disintegration break out most violently?  In a region called the Krajina.  Krajina means borderland.  So does Ukraine – it is a variant of the same Slavic root.  Both Krajina and Ukraine are borderlands between Catholic Christians in the West and Orthodox Christians in the East. The population is divided between those in the East who want to remain tied to Russia, and those in the West who are drawn toward Catholic lands.  But in Ukraine as a whole, polls show that some seventy percent of the population is against joining NATO.  Yet the US and its satellites keep speaking of Ukraine’s "right" to join NATO.  Nobody’s right not to join NATO is ever mentioned.

The condition for Ukraine to join NATO would be the expulsion of foreign military bases from Ukrainian territory.  That would mean expelling Russia from its historic naval base at Sebastopol, essential for Russia’s Black Sea fleet.  Sebastopol is on the Crimean peninsula, inhabited by patriotic Russians, which was only made an administrative part of Ukraine in 1954 by Nikita Khrushchev, a Ukrainian.

Rather the way Tito, a Croat, gave almost the whole Adriatic coastline of Yugoslavia to Croatia, and generally enforced administrative borders detrimental to the Serbs.

As the same causes may have the same effects, US insistence on "liberating" Ukraine from Russian influence may have the same effect as the West’s insistence on "liberating" the Catholic Croats from the Orthodox Serbs.  That effect is war.  But instead of a small war, against the Serbs, who had neither the means nor even the will to fight the West (since they largely thought they were part of it), a war in Ukraine would mean a war with Russia.  A nuclear superpower.  And one that will not stand idly by while the United States continues to move its fleet and its air bases to the edges of Russian territory, both in the Black Sea and in the Baltic, on land, sea and air.

Every day, the United States is busy expanding NATO, training forces, building bases, making deals. This goes on constantly but is scarcely reported by the media.  The citizens of NATO countries have no idea what they are being led into. (…)

War was easy when it meant the destruction of a helpless and harmless Serbia, with no casualties among the NATO aggressors.  But war with Russia – a fierce superpower with a nuclear arsenal – would not be so much fun.
_____

So, now here we are five years later, and I am about to attend another commemoration in Belgrade, this time of the fifteenth anniversary of the start of the NATO bombing of Yugoslavia.  And this time, I really have nothing to say.  I have already said it, over and over.  Others are saying similar things, with more authority, from Professor Stephen Cohen to Paul Craig Roberts.  Many of us have warned against the dangerous folly of seeking endlessly to provoke Russia by enlisting her neighbors in a military alliance whose enemy could <foolsjohnstone.jpeg>only be… Russia.  Of all Russia’s neighbors, none is more organically linked to Russia by language, history, geopolitical reality, religion and powerful emotions. The U.S. Undersecretary of State for Europe and Eurasia, Victoria Nuland, has openly boasted that the United States has spent five billion dollars to gain influence in Ukraine – in reality, in order to draw Ukraine away from Russia and into the U.S. military alliance.  It is now no secret that Ms Nuland intrigued even against America’s European allies – who had a less brutal compromise in mind – in order to replace the elected President with the American protégé she calls "Yats", who indeed was soon installed in a far right government resulting from violent actions by one of the very few violent fascist movements still surviving in Europe.

True, Western media do not report all the facts at their disposal.  But the internet is there, and the facts are on the internet.  And despite all this, European governments do not protest, there are no demonstrations in the streets, much of public opinion seems to accept the notion that the villain of this story is the Russian president, who is accused of engaging in unprovoked aggression against Crimea – even though he was responding to one of the most blatant provocations in history.

So up to now, I have remained speechless in the face of what appears to me to be utter madness.  However, on the eve of my trip to Belgrade, I agreed to answer questions from journalist Dragan Vukotic for the Serbian daily newspaper Politika.  Here is that interview.
____

Q. In your book  Fools’ Crusade: Yugoslavia, NATO, and Western Delusions, you have brought a different stance about NATO bombing of Yugoslavia than many of your intellectual colleagues in the West. What prompted you to make such an unpopular conclusion?

A. Long ago, as a student of Russia area studies, I spent several months in Yugoslavia living in a student dormitory in Belgrade and made friends there.  I turned to such old friends for viewpoints rather than to the sources consulted by Western reporters.  And I have a lifelong interest in US foreign policy.  I began my inquiry into Yugoslav conflicts by reading key documents, such as speeches of Milosevic, the Serbian Academy memorandum and works by Alija Izetbegovic, noting the inaccuracy of the way they were represented in Western media.  I was never under instructions from editors, and indeed my editors soon refused to publish my articles.  I was not the only experienced observer to be excluded from Western media coverage.

Q. Although subsequent events have confirmed that the operation of illegal bombing of one country without permission of the Security Council was completely wrong, the mainstream western media and politicians still refer to successful „Kosovo model". Can you please comment on this matter?

A. For them, it was a success, since it set a precedent for NATO intervention.  They will never admit that they were mistaken.

Q. When it came to the preparation of the "humanitarian intervention" against Syria, Obama administration reported they were studying "the NATO air war in Kosovo as a possible blueprint for acting without a mandate from the United Nations". (Please comment on this)

A. This is not surprising, since setting such a precedent was one of the motives for that air war.

Q. In one of your articles you asked the question about what the ICC stood for in the case of Libya. You recalled the "familiar pattern" with the case of ICTY and Yugoslavia. What do you really think of those instruments of international justice and their role in international relations?

A. In the context of the present world relationship of forces, the ICC like the ad hoc tribunals can only serve as instruments of United States hegemony.  Those criminal tribunals are used only to stigmatize adversaries of the United States, while the main role of the ICC so far is to justify the ideological assumption that there exists an unbiased "international justice" that ignores national boundaries and serves to enforce human rights. As John Laughland has pointed out, a proper court must be the expression of a particular community that agrees to judge its own members.  Moreover, these courts have no police of their own but must rely on the armed force of the United States, NATO and their client states, who as a result are automatically exempt from prosecution by these supposedly "international" courts.

Q. What is, in your opinion, the main purpose of declaring the so-called humanitarian intervention? Does it have more to do with the domestic public opinion or with the international partners?

A. The ideology of Human Rights (a dubious concept, incidentally, since "rights" should be grounded in concrete political arrangements, not on abstract concepts alone) serves both domestic and global purposes.  For the European Union, it suggests a "soft" European nationalism based on social virtue.  The United States, which is more forthright than today’s Europe in proclaiming its national interest, the ideology of Human Rights serves to endow foreign interventions with a crusading purpose that can appeal to European allies and above all to their domestic opinion, as well as to the English-speaking world in general (Canada and Australia in particular).  It is the tribute vice pays to virtue, to echo LaRochefoucauld.

Q. You often use the term "US and its European satellites". Please explain.

A. "Satellites" was the term used for members of the Warsaw Pact, and today the governments of the NATO member states follow Washington as obediently as the former followed Moscow, even when, as in the case of Ukraine, the United States goes against European interests.

Q. How do you see current goings on in Ukraine and Crimea, especially in terms of US-Russia relations?

A. US-Russian relations are determined primarily by an ongoing U.S. geostrategic hostility to Russia which is partly a matter of habit or inertia, partly a realization of the Brzezinski strategy of dividing Eurasia in order to maintain US world hegemony, and partly a reflection of Israeli-dominated Middle East policy toward Syria and Iran.  Between the two major nuclear powers, there is clearly an aggressor and an aggressed. It is up to the aggressor to change course if relations are to be normal.

Simply compare.  Is Russia urging Quebec to secede from Canada so that the province can join a military alliance led by Moscow?  Evidently not.  That would be comparable, and yet mild compared to the recent U.S. gambit led by Victoria Nuland aimed at bringing Ukraine, including the main Russian naval base at Sebastopol, into the Western orbit. The material reality of this political orbit is NATO, which since the end of the Soviet Union has systematically expanded toward Russia, which stations missiles whose only strategic function would be to provide the United States with a hypothetical nuclear first strike capacity against Russia, and which regularly holds military manoeuvers along Russian borders.  Russia has done nothing against the United States, and recently provided President Obama with a face-saving way to avoid being voted down in Congress in regard to military action against Syria – action which was not desired by the Pentagon but only by the fraction of Israeli-oriented policy makers called "neocons". Russia professes no hostile ideology, and only seeks normal relations with the West.  What more can it do?  It is up to Americans to come to their senses.
_____

Diana Johnstone is the author of Fools’ Crusade: Yugoslavia, NATO, and Western Delusions.   She can be reached at diana.johnstone@wanadoo.fr