Do We Need Public Education?

If we think privatization through to its logical conclusion, it becomes clear that the school closings and massive spread of private charter schools is more than an attack on public education. It is an attack on the whole idea of education for all. And sadly, it goes beyond education to the destruction of whole communities. 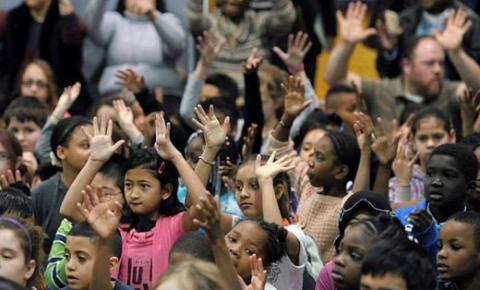 The Children's School of Rochester have an assembly to start their day in Rochester, New York on Jan. 31, 2014.,credit -adrian kraus/akoPhoto 2014 / American Federation of Teachers Facebook page

The last two mayors of Chicago do not seem to think that we need public education. They have been busy privatizing education. Just weeks after Mayor Rahm Emanuel's appointed school board closed 50 public schools, they approved the opening of seven additional private charter schools. These charter schools are privately controlled but publicly funded. They are not supervised by any public agency. They report to no one other than their company's CEO. The public, which pays for charter schools through their taxes, has no input into any educational practices of the charter schools. Unlike Chicago public schools, where key decisions are made by an elected Local School Council, neither parents nor community control anything a charter school does.

In just a few years, many private charters have been opened and many public schools have been closed. Already, 20 percent of students funded by Chicago taxpayers attend the private charter schools, some of them run for profit. Does that matter?

Although evidence shows the contrary, Emanuel and pro-charter politicians claim that charter schools are better. The present day Republican Party and Democrats like Emanuel claim private business is more efficient than government operation. So why not get rid of all the public schools and let private business run them? Do we need public education?

Well this writer had a scary experience that I think sheds some light on this issue. From 1954 to 1962 we lived in Gary, Ind., sitting on the shore of lovely Lake Michigan, part of the Great Lakes. The Great Lakes are the largest surface freshwater system on Earth. Only the polar ice caps contain more fresh water. But even though we lived in Gary, we could not get city water. The very profitable, high priced, private water supply company was not a public service. Then called the Gary Hobart water company, it is now part of a national company, the American Water Company. They operate in 30 states and parts of Canada delivering water at a profit to 14 million people.

Back in 1958, Gary Mayor Chacharis put a referendum on the ballot to empower the city to make the water supply a public service. The private water company hired smart advertisers who defeated the referendum with the slogan: "Keep the politicians dirty hands out of our water."

That had some bad consequences for my Wooded Highlands neighborhood. We could not get city water unless we paid the entire cost to install pipes to bring the water to our community. Well we could not individually afford to pay the many thousands of dollars involved. For the city, that would have been a normal investment paid for by the city as a whole. But the city did not own the water supply and could not force the company to lay the pipes. On the company's part, they refused to make the investment because it was not profitable enough. And profit was their only motive. So we continued to drink water from wells, 30 percent of them contaminated. And our children continued to get sick.

I realized then that there are some essential services that government must perform, that they cannot sell to a private company. Pure water supply is one of them. And education is another.

If we think privatization through to its logical conclusion, it becomes clear that the school closings and massive spread of private charter schools is more than an attack on public education. It is an attack on the whole idea of education for all. And sadly, it goes beyond education to the destruction of whole communities. But that is a subject for other blogs.

Let's think this through. Suppose all public schools were privatized and replaced by charter schools. They would be owned by a helter-skelter pattern of different owners. Where would they get their school curriculums? Well where do charter schools get their curricula now?

Most base their instruction on the public school's curriculum. But if there were no public schools? OK, charter schools can find curriculums in the textbooks published by the highly monopolized industry. But where do these textbook companies get their curriculums? Now they are all scurrying to base their textbooks on the Common Core State Standards. And where did the Common Core State Standards come from? According to the official history, they come from " ... the excellent foundation of standards states have laid ..." But if we take the state out of the education business? See how ridiculous it gets!

So where do we go from here? It's not too late to save public education, although I agree with Diane Ravitch that we are approaching a "tipping point," at least in our large cities. The first step in saving our schools is obvious. As demanded by the Chicago Teachers Union, stop opening any more new charter schools. Then we can plan the re-integration of charter schools as public schools. If a charter school claims to have developed any innovative features, those should be maintained. The original suggestion for charter schools came from Albert Shanker, as a way to try innovative ideas. But Shanker, a president of the American Federation of Teachers AFL-CIO, proposed charters as part of the public schools, not as private schools.

Some good steps towards fixing the charter school mess were advanced by Diane Ravitch in the July 16, 2012, Washington Post blog.

It is obvious that the teachers' unions must play a central role in saving public education. And they are trying to do that. But it is also obvious that teachers cannot win without massive community support. That kind of support was growing around the 2012 Chicago Teachers Strike. The union could not have won without it. But it is not yet strong enough to stop the school privatizing privateers. In my opinion, nothing short of a mass social movement can build the strength needed to reverse privatization and build the public school system our children need and deserve. It was that kind of movement that won public education in the first place. And we saw the beginnings of it in the last Chicago Teachers Union strike and hopefully, in the New York City mayoralty elections.

[Beatrice Lumpkin is a member of the  Citizen Action/Illinois Policy Council.]