Despite being given the largest state tax break in U.S. history, Boeing is shipping jobs out of the state. One guy that nobody listened to predicted it. 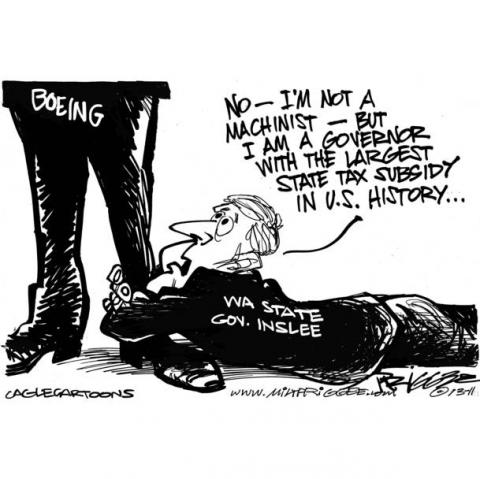 When state politicians were scrambling last fall to give Boeing the largest state tax break in U.S. history, they did pause, briefly, to hold three public hearings over the course of two days.

It was mostly a pep rally. The governor, the county executives, the heads of chambers of commerce and assorted corporate lobbyists all took the mike for a sales spiel on behalf of the $8.7 billion deal. Jobs, was the argument.

There was one downer at this party. He testified at all three hearings, repeating the same cautionary analysis to anybody who might be listening. Which nobody was.

He said: The deal is more of a handshake than a contract. It contains no guarantees our state will get more Boeing jobs. It also has no language to dissuade Boeing from moving thousands of jobs out of state, even as it allows the company to continue to reap the tax breaks.

Welfare recipients “have to meet stronger accountability requirements than this,” the downer said.

Well, last week Boeing said it was moving 1,000 Puget Sound engineering jobs to California. That’s after another announcing a plan last winter to ship much of its local research and technology division elsewhere, a loss of another 1,000 jobs.

“This means that essentially all the aerospace research that was previously conducted in Washington state will be relocated to other areas of the U.S.,” one research engineer told The Seattle Times.

A Boeing exec did say the new 777X project — the prize for all this expensive wooing — will employ an estimated 850 engineers. I’m clearly no engineer, but I think 850 minus 1,000 minus 1,000 more comes out to a negative number for us.

“It’s frustrating, because this is exactly what we were getting at it those few days in Olympia. This tax-break package was written so loosely it gives Boeing free rein to do whatever they were going to do anyway.”

That’s Andy Nicholas. He’s a fiscal analyst at a liberal Seattle think tank, the Washington State Budget and Policy Center. I called him because his testimony last fall stands out now. For being prescient. And for being ignored.

He wasn’t against giving Boeing tax aid to build the 777X here. With so much taxpayer money at stake, though, the state should have negotiated far better protection for itself.

The law says Boeing must site a new plant here to get the tax breaks. But there are no net job targets, as is common in these deals. It’s also silent on whether Boeing could move other work, such as for the 787. Lawmakers claim they regret not getting tougher language on the 787 the first time, as Boeing eventually sent a lot of that work to South Carolina. Here they had another chance, and they didn’t do it again.

Nicholas is a Boeing brat — his dad was a longtime engineer in Boeing’s tool-design unit. So he takes this debate over dry fiscal policy surprisingly personal.

“My bias is that Washington state built this company,” he said. “But now I feel like I’m more Boeing than the current CEO. And I don’t even work there.”

Nicholas said there will be a lot of jobs associated with the 777X work. How that will balance with Boeing moving other jobs out is the big question.

“There’s already the 2,000 engineering jobs gone,” he said. “So it’s going to be a huge issue going ahead.”

The Legislature ought to reopen the tax-break bill to toughen it up, he said. It’s the biggest in U.S. history, yet a bunch of pink slips is the immediate reward? So make it better.

“They could go back into session and make this right at any time,” he said.

That advice will doubtless be ignored as well. Doesn’t make it any less good.