Antitrust in the New Gilded Age

Some argue that the broadband market already has been carved up into a cartel, so blocking the acquisition would do little to bring down prices. Washington should examine a larger question beyond whether the deal is good or bad for consumers: Is it good for our democracy? We haven’t needed to ask this question for more than a century because America hasn’t experienced the present concentration of economic wealth and power in more than a century. 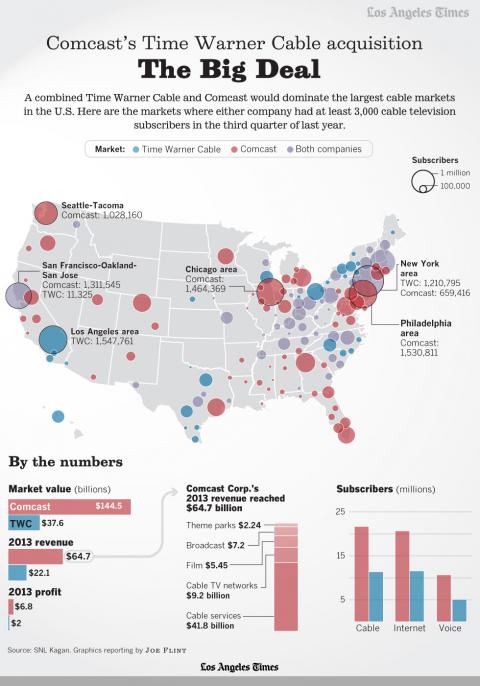 We’re in a new gilded age of wealth and power similar to the first gilded age when the nation’s antitrust laws were enacted. Those laws should prevent or bust up concentrations of economic power that not only harm consumers but also undermine our democracy — such as the pending Comcast acquisition of Time-Warner.

In 1890, when Republican Senator John Sherman of Ohio urged his congressional colleagues to act against the centralized industrial powers that threatened America, he did not distinguish between economic and political power because they were one and the same. The field of economics was then called “political economy,” and inordinate power could undermine both. “If we will not endure a king as a political power,” Sherman thundered, “we should not endure a king over the production, transportation, and sale of any of the necessaries of life.”

Shortly thereafter, the Sherman Antitrust Act was passed by the Senate 52 to 1, and moved quickly through the House without dissent. President Harrison signed it into law July 2, 1890.

In many respects America is back to the same giant concentrations of wealth and economic power that endangered democracy a century ago. The floodgates of big money have been opened even wider in the wake of the Supreme Court’s 2010 decision in “Citizen’s United vs. FEC” and its recent “McCutcheon" decision.

Seen in this light, Comcast’s proposed acquisition of Time-Warner for $45 billion is especially troublesome — and not just because it may be bad for consumers. Comcast is the nation’s biggest provider of cable television and high-speed Internet service; Time Warner is the second biggest.

Last week, Comcast’s executives descended on Washington to persuade regulators and elected officials that the combination will be good for consumers. They say it will allow Comcast to increase its investments in cable and high-speed Internet, and encourage rivals to do so as well.

Opponents argue the combination will give consumers fewer choices, resulting in higher cable and Internet bills. And any company relying on Comcast’s pipes to get its content to consumers (think Netflix, Amazon, YouTube, or any distributor competing with Comcast’s own television network, NBCUniversal) also will have to pay more — charges that will also be passed on to consumers.

I think the opponents have the better argument. Internet service providers in America are already too concentrated, which is why Americans pay more for Internet access than the citizens of almost any other advanced nation.

Some argue that the broadband market already has been carved up into a cartel, so blocking the acquisition would do little to bring down prices. One response would be for the Federal Communications Commission to declare broadband service a public utility and regulate prices.

But Washington should also examine a larger question beyond whether the deal is good or bad for consumers: Is it good for our democracy?

But were Senator John Sherman were alive today he’d note that Comcast is already is a huge political player, contributing $1,822,395 so far in the 2013-2014 election cycle, according to data collected by the Center for Responsive Politics — ranking it 18th of all 13,457 corporations and organizations that have donated to campaigns since the cycle began.

Last year, Comcast also spent $18,810,000 on lobbying, the seventh highest amount of any corporation or organization reporting lobbying expenditures, as required by law.

Comcast is also one of the nation’s biggest revolving doors. Of its 107 lobbyists, 86 worked in government before lobbying for Comcast. Its in-house lobbyists include several former chiefs of staff  to Senate and House Democrats and Republicans as well as a former commissioner of the Federal Communications Commission.

Nor is Time-Warner a slouch when it comes to political donations, lobbyists, and revolving doors. It also ranks near the top.

When any large corporation wields this degree of political influence it drowns out the voices of the rest of us, including small businesses. The danger is greater when such power is wielded by media giants because they can potentially control the marketplace of ideas on which a democracy is based.

When two such media giants merge, the threat is extreme. If film-makers, television producers, directors, and news organizations have to rely on Comcast to get their content to the public, Comcast is able to exercise a stranglehold on what Americans see and hear.

Remember, this is occurring in America’s new gilded age — similar to the first one in which a young Teddy Roosevelt castigated the “malefactors of great wealth, who were “equally careless of the working men, whom they oppress, and of the State, whose existence they imperil.”

It’s that same equal carelessness toward average Americans and toward our democracy that ought to be of primary concern to us now. Big money that engulfs government makes government incapable of protecting the rest of us against the further depredations of big money.

After becoming President in 1901, Roosevelt used the Sherman Act against forty-five giant companies, including the giant Northern Securities Company that threatened to dominate transportation in the Northwest. William Howard Taft continued to use it, busting up the Standard Oil Trust in 1911.

In this new gilded age, we should remind ourselves of a central guiding purpose of America’s original antitrust law, and use it no less boldly.