The recent French municipal elections...The abstention levels of 39% were a record high for municipal elections. They were particularly high in areas most affected by the crisis; in metropolitan communes; among the young; workers; and voters of the Front de Gauche (Left Front) and of the FN (National Front). In addition, almost 3 million potential voters were not registered to vote. 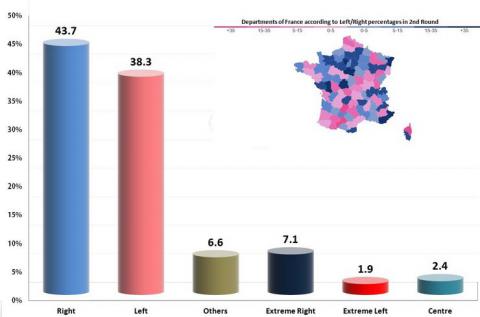 Results from the French municipal elections - second round, Metapolls

For the PS (Socialist Party), this is its Waterloo. Of the 160 PS-controlled communes with more than 20,000 residents, the party held on to 82, lost 78 and took 2 from the PCF (French Communist Party) and 2 from the Right. Traditional bastions of support, like Limoges, collapsed. While Lyon and Paris were salvaged, PS control over many metropolitan areas (which are gaining in power compared to towns) is now lost. This is down to the PS sinking as a result of widespread unhappiness and its voters beating a retreat rather than any new surge from the Right. Not all of the consequences can be seen yet. While the PS had been in power practically everywhere (the National Assembly and Senate, in almost every region, the majority of departments and large towns), all of that has disintegrated. When the new Senate sits in September, control will move to the Right while regional and departmental elections in 2015 now look set to be extremely difficult for the Left. The Party itself, as a structure, will be profoundly shaken to the extent that its structure is closely linked to its foothold in the institutions.

It is difficult to draw comparisons for the PCF and the Front de Gauche because the situation has changed a lot since 2008. Of the 2,901 communes with more than 3,500 residents, the PCF led in 109 of the alliance lists for the Left as a whole with the PS. Of the Front de Gauche lists excluding the PS, the PCF came out on top in 399 towns, the Parti de Gauche (Left Party) in 43 towns while 36 communes were won by non-party members. In 107 towns, the Parti de Gauche topped the lists without the PCF which had an alliance with the PS in these areas. There is a clear trend of forming lists involving different configurations of the Left and without the PS. However, the absence of Front de Gauche lists in certain cities, and in particular in Paris, as well as the publicly visible crisis within the Front de Gauche prevented there being any national Front de Gauche momentum. In some towns, such lists achieved good results without being dragged down with the PS. As for the PCF, after almost stabilising in 2008, it suffered significant erosion of its local bases, a process which began in 1977. It held on to 137 towns of more than 3,500 residents, lost 47 and gained 12 including 2 important ones (Aubervilliers and Montreuil in Ile de France).

On the Right, the big winners were the UMP (Union for a Popular Movement) and the UDI (Union of Democrats and Independents) which today controls 269 towns with more than 20,000 residents, compared to 187 before the elections. The FN emerges from this election strengthened, having gained control of nine towns with more than 10,000 residents, 4 taken from the Left (in the North) and 5 from the Right (in the South). The porous nature of the relationship between the voters of the Right and the FN was confirmed. The plan of a foundation close to the PS to use the presence of the FN in the second round to mobilise the Left did not work. Overall, the FN, after Sarkozy's wooing of its voters, has returned to its 1995 level. In the first round it presented lists in 597 towns having garnered 1,033,521 votes (it was 512 towns and 924,000 votes in 1995). The Right, as a whole, is now winning the battle in the streets (after the large demonstrations in 2013) in terms of ideas, in the working-class areas and at the ballot box.

Considering the historic collapse of Social-Democracy and its political stance which could lead to an existential crisis within the PS, the Front de Gauche must urgently rebuild itself (as it has started to do with the march against austerity on 12 April and the agreement on the constitution of lists for the European elections) and innovate its strategy so as to encompass a broader grouping of all those fighting for the politics of the Left.

[Elisabeth Gauthier is director of Espaces Marx (France), member of the managing board of transform! europe and member of the national committee of the French Communist Party.]