In the Doghouse (Book Review)

The author reviews two books: One discusses the state of journalism today; the other examines how the dominant culture brutalizes the poor and lionizes the powerful. 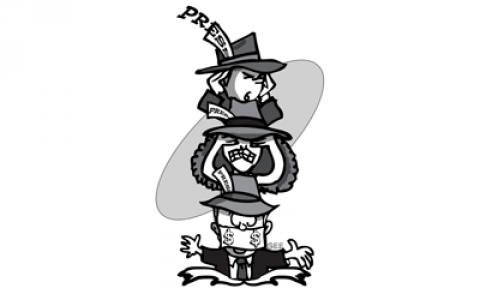 The Watchdog That Didn’t Bark: The Financial Crisis and the Disappearance of Investigative Journalism
By Dean Starkman
Columbia University Press, 2014

The Divide: American Injustice in the Age of the Wealth Gap
By Matt Taibbi
Spiegel and Grau, 2014

Legendary newspaper publisher Joseph Pulitzer famously urged his reporters to “comfort the afflicted and afflict the comfortable.” Hollywood classics from His Girl Friday to All the President’s Men have given us a cultural archetype of a hard-charging reporter as the scourge of the preening and the powerful. Pretentions aside, the mainstream media consistently fails to live up to this heroic ideal. But there have been exceptions, and exceptional practices. “Accountability reporting,” or investigative reporting, is one of them.

This is writing that goes deep, asks hard questions, examines systems as well as individuals and, in its purest form, is not just descriptive and true, but subversive. Always the runt in a world of moneyed press tycoons then and globalized corporate media now, it’s shrinking further.

The predominant form of business writing isn’t investigative. It’s incremental, contextless and moralistic where it should be cumulative, historical and moral. It’s “access reporting,” which in most mainstream-media business coverage — with such notable exceptions today as The New York Times’ Gretchen Morgenson — is little more than insider market-messaging for investors and the top of the business class. At its worst it’s rewritten press releases, mergers and acquisitions horse-race results, and stock quotes for market junkies.

Dean Starkman, a longtime Wall Street Journal writer and now a Columbia University Journalism School professor, does a huge public service in his richly detailed and highly readable new book by teasing out what has been good about mainstream business press practice. While he sets his gaze on established media institutions — he pays no attention to outside voices such as the socialist, labor, foreign-language or underground press — he knows there were enough examples of solid reporting to make his case that the media has and can do better. Among those he savors are the early 20th century muckrakers, including Ida Tarbell, whose classic The History of the Standard Oil Company set the stage for the breakup of John D. Rockefeller’s company and Bernard Kilgore, the legendary Wall Street Journal editor who Starkman says “brought storytelling, narrative, in-depth reporting and investigations to financial news and, in doing so, revolutionized both it and American newspapers in general.”

Now it’s all prizing elite over dissident sources and scoop reporting over long-form analysis. In short, it’s putting profiling ahead of probing.

The shift toward “greed is good” as an ideological trope accelerated after the introduction of CNBC in 1989 and the growth of an almost endless supply of market-oriented websites for the 24/7 news era. The New York Times Deal Book, launched in 2001, was an insiders’ e-newsletter honchoed by Andrew Ross Sorkin, who got his break at age 22 as a Timesman reporting on mergers and acquisitions.

Sorkin is a poster boy for the we-don’t-probe genre. Too Big to Fail — his best-selling 2009 post-mortem on the 2008 economic crash he never saw coming — is so centered on the doings at the executive-suite level that, says Starkman, he “steadfastly declines to look beyond the months leading up to the crash, so readers are left without the context to understand that nearly every individual named in the book played significant roles in causing the crisis.”

Another Kind of Journalism

One outcome of the press’s business-enabling reporting is losing any coherent understanding of the dangers in the growing gap in wealth, income and political power. In The Divide: American Injustice in the Age of the Wealth Gap, former Rolling Stone contributing editor Matt Taibbi starts with a fair question: why, when poverty rates rose and crime declined, did the prison population correspondingly explode. He then looks at how history’s greatest single plundering of wealth — the fraudulent sale of toxic, subprime mortgage-based securities by the biggest banks to pension funds and municipalities — led only to a flurry of civil trials but not to criminal prosecutions. He contrasts that to the routine, extreme brutality of police toward inner-city residents and the disregard for the humanity of undocumented workers in ICE sweeps and routine traffic stops.

Why, he urges us to consider, are single mothers living on public assistance jailed for minor drug offenses when HSBC Bank can launder $850 million in Mexican drug cartel money and get off with a fine? Why does a fare jumper at 125th Street get jail time for breaking a municipal law while a bank that breaks 50 state laws receives a financial slap on the wrist?

Taibbi’s reporting, most of it original, is superb, though I’m not satisfied with Taibbi’s answers. Yes, he makes the case that the rich are advantaged in hiring a string of $1,000 per hour legal help to frustrate even the most committed prosecutors. Yes, the Securities and Exchange Commission has been dozing for years. Yes, key Wall Street financiers move through government circles like extended family members at a July 4 picnic. All true, and his reporting on it is must-read. The big question is, why is it tolerated?

Throughout The Divide, Taibbi refers to the legal system’s hypocrisies as insane and racist (which they are) and increasingly likely to be meted out to the so-called middle class as the wealth and power divide widens, but he spends almost no time investigating why our culture so deeply supports and even applauds such blatant discrimination. And just when you think he will, he lands on one more excruciating story of blatant abuses.

Taibbi’s case against a dominant culture that brutalizes the poor and lionizes the powerful is unshakeable. Why it persists and what can be done to challenge it goes unexplored. It is up to the rest of us to supply the answers.