A faith-based movement potentially able to provide momentum to a new movement for social justice. 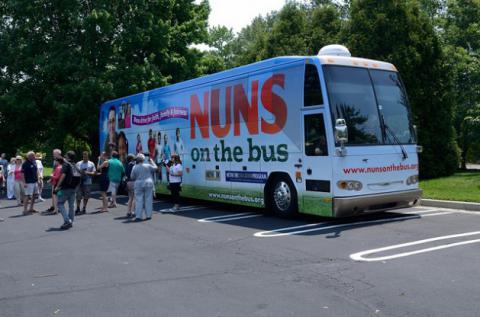 "Nuns on the Bus" take their campaign around the country in 2012 lobbying for social justice reforms.,Tvnewsbadge/cc by 2.0

The future of religion in U.S. politics lies not with conservatives but rather with religious progressives, social scientists here are suggesting, with a faith-based movement potentially able to provide momentum to a new movement for social justice.

According to a new report from the Brookings Institute, a think tank here, the current religious social justice movement can be compared to the period of civil rights activism in the mid-20th century.

“There really is an opening now for a religious movement for social justice that is similar in many ways to the civil rights movement. We see it around issues of minimum wage, budget cuts, and immigration,” E.J. Dionne, a senior fellow at the Brookings Institution and one of the authors of the report, told IPS.

“On social justice issues, religion has long been a progressive force, and Pope Francis is challenging people’s assumptions that religion is an automatically conservative force … After years of paying lots of attention to religious conservatives, religion by no means lives on the right.”

The United States has a strong history of religious groups in social justice movements, including in pushing for the abolition of slavery and the institutionalization of civil rights, as well as the social welfare programs put in place a half-century ago. Yet today, religion and progressivism are often seen as being at odds.

According to the report, for instance, just 47 percent of white Evangelicals in the United States think government needs to do more to reduce the gap between rich and poor. On the contrary, 85 percent of Democrats hold this belief.

This schism underscores two trends that have defined the U.S. religious landscape over the past two decades: a decline in those who regularly attend religious services, and a rise in the conservative “religious right”.

According to the report, these trends are interrelated, as “many young Americans were not turned off by faith itself but by the rightward trend they perceive among leaders. To young adults … ‘religion’ means ‘Republican,’ ‘intolerant,’ and ‘homophobic.’”

Yet despite these trends of growing secularization, Dionne said, “a religious voice will remain essential to movements on behalf of the poor and the marginalized and also on behalf of the middle-class Americans who are under increasing pressure at a time of inequality.”

Further, demographics indicate that this religious voice will not be from the conservative wing, Dionne suggests. During the last presidential election here, in 2012, the ages of the religious coalitions that voted for President Barack Obama versus his Republican rival, Mitt Romney were starkly different.

Of those who considered themselves actively religious, Romney voters were primarily elderly, while Obama’s supporters skewed far younger. “What’s clear,” the report suggests, “is that the religious right is not the way of the future.”

A primary challenge is congregational decline. In 1958, about 49 percent of Americans attended church services weekly, while today that number is down to about 18 percent.

This decline naturally decreases the coalition size and donor base available for grassroots work. In addition, this has often been accompanied by a decreased respect for religious groups, exacerbating divides between those who consider themselves religious versus secular.

For example, the Catholic Campaign for Human Development (CCHD), which supports a spectrum of faith-based grassroots organizations, provided over nine million dollars in grants to over 214 groups last year. However, after Catholic anti-abortion groups pushed the U.S. Conference of Catholic Bishops to strictly regulate donations from Catholic coalitions, some CCHD grants were cut – even if the projects had only tangential connections to abortion or same-sex marriage.

Still, many groups have overcome such challenges.

Prominent examples in this regard include Circle of Protection, an alliance of Christian leaders who have banded together to try to protect pro-poor government programs from budget cuts. Likewise, Nuns on the Bus, a group of Catholic nuns who travel the country lobbying for social justice reforms, played a role in the 2012 elections.

“One of the reasons religious voices are so important now is that, especially with the weakening of the labor movement, the churches are the only mass organization representing many, many poor people,” said Dionne.

“Some research we did showed that, for example, in neighborhood community development, the pastors are the only people who could get the attention of the banks.”

The report notes that these religious progressive groups are very active and often successful, but lack the fanfare that can receive broad public attention.

Another U.S. group, the Interfaith Center on Corporate Responsibility (ICCR), has focused on trying to influence corporate decision-making, both domestically and internationally, from an interfaith perspective for nearly a half-century.

“Frankly, those who are ideologically or politically divided can learn something from ICCR,” Laura Berry, the group’s executive director, told IPS. “There are some areas where the right and the left agree, after all, and finding those places to build coalitions are wonderful opportunities to reverse trends in inequality.”

Berry highlighted ICCR’s work following last year’s collapse of Rana Plaza, the Bangladeshi garment factory that killed more than 1100 people. Since then, ICCR has led a coalition representing over 4.1 trillion dollars in managed assets, pushing over 160 companies to have their overseas factories inspected, to hire and train labor inspectors, and to adopt improved worker safety standards.

According to Berry, ICCR’s own experience elucidates several of the trends indicated by the Brookings report.

“We’ve become increasingly driven by a broader coalition that includes increasingly secular progressive voices,” she says. “First we were only religious. But now we include more secular members, like labor unions and asset managers.”

ICCR is also facing many of the challenges outlined in the Brookings report, Berry says, particularly over ideological divides. Yet she notes that important areas of overlap and opportunity continue to arise.

“There are positive signs of improved coalition-building in human rights, like human trafficking, among Evangelicals and progressive Christians,” she says.

“We’re not going to let the ideological divide in the broad Christian community prevent us from talking about inequality … And we’re starting to see some leaders like Pope Francis who are saying things out loud, and people are asking, ‘Is that progressive? Is that conservative?’”