To puncture official indifference, Latin American indigenous women are staging a tribunal on the sidelines of a U.N. permanent forum "to push back the invisibility" about what they suffer. "The justice system really doesn't work for us," says one. 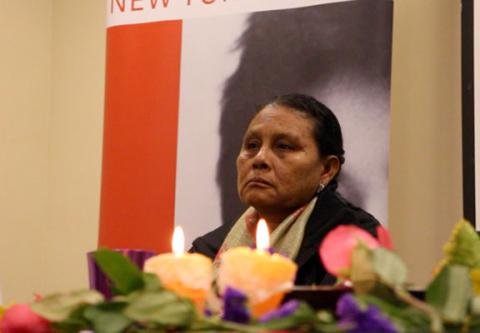 A participant at the tribunal, which took place last week on the sidelines of the United Nations Permanent Forum on Indigenous Issues., Women's eNews

At the tribunal, she calls herself Angelica Narvaez, which is not her real name. She is 17, from Mexico and says she is being bullied at school, being called names.

"Indian, short, black and savage," Narvaez told a gathering here last week, with her voice breaking and her translator in tears. "They hit me on my head too," said Narvaez, adding that neither the teachers nor anyone else at the school has done anything to protect her.

Across the street from the United Nations Permanent Forum on Indigenous Issues, taking place here from May 12 through May 23, indigenous women from Latin America are staging public tribunals to denounce and publicize the violence and discrimination they suffer.

Narvaez was one of a dozen indigenous women from Guatemala, Mexico and Nicaragua who gathered on May 15 at the Church Center for the United Nations to tell their stories and emphasize the lack of response or protection from authorities.

"One of the main problems is the type of systems we have," Rose Cunningham told Women's eNews in an interview at the New York event last week. "The justice system doesn't really work for us. We have a lot of discrimination."

Cunningham, director of the Wangki Tangni Women's Center on the north coast of Nicaragua, flew here to attract international attention. "That's how you can put pressure on governments," she said.

Rape, sexual abuse, femicide, physical and verbal abuse and discrimination are some of the forms of violence experienced by indigenous women in their own communities, said the women at the forum.

The problems have systemic roots, the women added. In many countries, the simultaneous influence of national legislation and customary or religious laws often lead to tensions and complications in the implementation of the rights of women and girls, according to a 2013 UN Women report. For instance, child marriage may be well accepted by certain customs while national legislation opposes this practice.

Cunningham added that drug trafficking in Latin America worsens the vulnerability of indigenous women and girls. Also, in conflict regions indigenous women and girls are used as "spoils of war," according to the 2013 UN Women report. The report says that armed groups occupying indigenous lands in countries such as Colombia and Nicaragua have "kidnapped indigenous women, collectively used them sexually and abandoned them with impunity," while young girls were also forced to perform domestic duties.

In 2012 a U.N. expert group found that gender-motivated killings, or femicide, were particularly common among indigenous women and girls caught amid the armed conflict in Colombia, Guatemala, Mexico, Nicaragua and Peru.

Listen to the video.

In addition to gender-based violence, indigenous women in Latin America continue to face large gaps in access to higher education, health services and employment, according to a report published in 2013 by the U.N.'s Economic Commission for Latin America and the Caribbean.

To break through the official silence about what they experience, indigenous women are using tribunals such as these ones "to push back the invisibility" they are suffering in their own communities and countries.

"It is an important mechanism to build a conscience and a historic memory of femicides," said one speaker at the forum here, organized by a number of local groups from the region in partnership with MADRE, an international women's human rights organization based in New York, and Rosa Luxemburg Stiftung, a German nonprofit institution for civic education.

The tribunal follows others in Guatemala in 2010, Mexico in 2011 and Nicaragua last year. Participants are aware the events have no direct policy links but they highlight the importance of documenting and publicizing their struggles.

[Hajer Naili is a New York-based reporter for Women's eNews. She has worked for several radio stations and publications in France and North Africa and specializes in Middle East and North Africa women in Islam.]