NBC Nightly News anchor Brian Williams asked Snowden, "When the president and others have made the point that you should have gone through channels, become a whistleblower and not pursued the route you did, what's your response?" "I actually did go through channels and that is documented," Snowden answered. "The NSA has records. 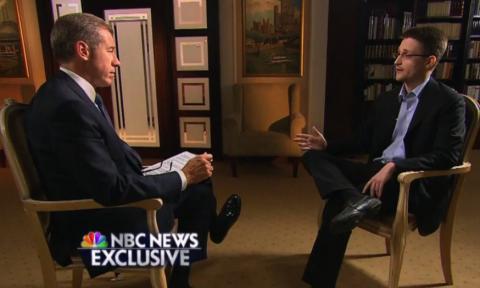 One major argument from critics of NSA whistleblower Edward Snowden has been that he did not go through “proper channels” in government before taking documents on top secret surveillance programs and providing them to journalists. But, during NBC News’ exclusive interview with Snowden, the network indicated that it was able to confirm Snowden had made at least one attempt to go through channels and the network is in the process of obtaining records showing other complaints were made to superiors.

NBC Nightly News anchor Brian Williams asked Snowden, “When the president and others have made the point that you should have gone through channels, become a whistleblower and not pursued the route you did, what’s your response?”

“I actually did go through channels and that is documented,” Snowden answered. “The NSA has records. They have copies of emails right now to their Office of General Counsel, to their oversight and compliance folks, from me raising concerns about the NSA’s interpretations of its legal authorities.”

“Now, I had raised these complaints not just officially in writing through email to these offices and these individuals but to my supervisors, to my colleagues in more than one office,” Snowden added. He said he had gone through channels at Fort Meade and in Hawaii.

Snowden claimed, “Many, many of these individuals were shocked by these programs. They had never seen themselves, and the ones who had went, you know, you’re right. These are things that are really concerning. These aren’t things that we should be doing. Maybe we’re going too far here, but if you say something about this they’re going to destroy you. Do you know what happens to people who stand up and talk about this?”

Williams asked for specifics. “What did you report? What was the response?”

“I reported that there were real problems with the way the NSA was interpreting its legal authorities and the response more or less, in bureaucratic language, was you should stop asking questions,” Snowden responded.

According to Snowden, this all happened in the months before he left the NSA with documents.

“I would say one of my final official acts in government was continuing one of these communications with a legal office,” Snowden said. “In fact, I’m so sure that these communications exist that I’ve called on Congress to write a letter to the NSA to verify that they do. Write to the Office of General Counsel and say, ‘Did Mr. Snowden ever communicate any concerns about the NSA’s interpretation of its legal authorities?’”

After this portion of the interview played, Williams informed viewers that NBC News had learned from “multiple sources that Snowden did indeed send at least one email to the General Counsel’s office raising policy and legal questions.” It was working to confirm further details and had filed a Freedom of Information Act request for any other records of Snowden going through channels.

Remarkably, during the post-interview analysis show that streamed on the web, NBC News anchor and correspondent Andrea Mitchell said in April 2013 he sent the one email to the General Counsel, which he talked about. She then acknowledged the NSA could be covering up “other emails” and Snowden could be right—that there is a “paper trail” showing he made “multiple attempts” to take his concerns to superiors.

“I asked one top official, do you think they could be lying to you and not turning it over to the legislative branch? And this person said I can’t be 100% sure,” Mitchell reported. “That is the degree to which what Snowden has revealed has affected supporters of the government surveillance program, their sense of the credibility, because we do think that people are lying to us about it.”

Imagine you’re the General Counsel at the National Security Agency and you get an email that says, listen, I think that you’re violating the law here. This is unconstitutional. And the General Counsel gets this note and he says, well, gosh, the Congress has authorized this over and over. The FISA court says it’s okay. Mr. Snowden, I appreciate your interest, but I’ve got two other branches of government who are pretty good at understanding the Constitution and they say it’s just fine.

Regardless of what he raised, this is an awfully odd whistleblowing act for them to know what to do with. [emphasis added]

Williams reacted, “Is that really what the counsel says? Knowing that in war powers times this was not FDR telling Chrysler they’re going to switch to making tanks but the Bush administration use of war powers with Bush and Cheney, isn’t the General Counsel at the NSA a little bit on guard for a perversion, as Snowden put it?

“I think if that email comes in 2004, 2005, before some other revelations in the New York Times about initial collection programs, that comes up and then you get scared,” Leiter suggested. “But post-2004, 2005, 2006, the Congress has been told about this. The Congress has approved it. The FISA court’s have approved it. So, yeah, maybe the general counsel kind of wonders, but he still says, should I listen to Edward Snowden? Or should I listen to the FISA court judges that have repeatedly approved this for the past five years?”

Leiter is spreading ignorance. People like William Binney, Thomas Drake, Ed Loomis, Kirk Wiebe and even a House Intelligence Committee staffer named Diane Roark had raised concerns about the surveillance being unconstitutional, unethical and illegal. Drake had a conversation with NSA Deputy General Counsel Vito Potenza over the phone, where he specifically raised the issue of dragnet surveillance being directed at Americans without a warrant.

Potenza did not want to have anything to do with Drake. He told FRONTLINE PBS, “There’s no doubt in my mind I would have told him, you know, go talk to your management. Don’t bother me with this. I mean, you know, the minute he said, if he did say you’re using this to violate the Constitution, I mean, I probably would have stopped the conversation at that point quite frankly. So, I mean, if that’s what he said he said, then anything after that I probably wasn’t listening to anyway.”

These people never made anyone in the higher echelons of the NSA “scared” until they started to expose details of warrantless wiretapping and other abuses of power to the press. After that, employees who were raising concerns became targets of a wide-ranging FBI investigation to stamp out leaks.

However, Leiter’s description of how this would have been an “awfully odd whistleblowing act” for them is noteworthy. It is similar to what NSA Inspector General George Ellard has said. Ellard would have told Snowden “fifteen federal judges have certified” the NSA phone records collection program is “okay.” He would have “explained to Mr. Snowden his misperceptions, his lack of understanding of what we do.” If that did not work, maybe he would make the Senate and House Intelligence Committees available to him all so they could say similar things to him: it’s all legal.

The NSA’s own top lawyers were invested in serving the Bush administration by finding a way to legally justify warrantless surveillance after the 9/11 attacks. They would have been disrupting the response to the attacks if they had tried to put the brakes on any expansion of surveillance. So, of course, someone telling the truth about the surveillance being illegal would be “awfully odd.” That person would have to be ignored or silenced so business as usual could continue.

Finally, it is not as if America has never been in a moment where all branches of government were, in effect, participants in the perpetuation of warrantless electronic surveillance. The Church Committee indicated in “Book III” of its report in the mid-1970s, “The legal theories advanced to justify the use” of “warrantless wiretapping” were “developed almost entirely by the executive branch itself,” and had been “‘legitimized’ largely by the reluctance of Congress and the Supreme Court to confront directly the arguments presented by executive officers.”

The FBI also actively sought to thwart any sort of congressional inquiry into electronic surveillance by any committee or subcommittee. In 1965, top FBI officials convinced Senator Edward Long of Missouri, who was under pressure to investigate FBI activities, to issue a statement after meeting with them that said he was now “completely satisfied” that the “FBI had never participated in uncontrolled usage of wiretaps or microphones and that FBI usage of such devices had been completely justified in all instances.” FBI officials wrote the statement Long eventually released to the public, and this intervention effectively convinced Long not to hold hearings into FBI warrantless surveillance.

Warrantless wiretapping is a felony. Yet, in 2008, Congress passed the FISA Amendments Act (FAA), which essentially legalized much of the surveillance that had been ongoing under the Bush administration and granted retroactive immunity to the telecommunications companies and made it virtually impossible to prosecute anyone, including government officials, for engaging in criminal surveillance.

As the New York Times wrote in an editorial in January, “Mr. Snowden told The Washington Post earlier this month that he did report his misgivings to two superiors at the agency, showing them the volume of data collected by the NSA, and that they took no action. (The NSA. says there is no evidence of this.) That’s almost certainly because the agency and its leaders don’t consider these collection programs to be an abuse and would never have acted on Mr. Snowden’s concerns.

“In retrospect, Mr. Snowden was clearly justified in believing that the only way to blow the whistle on this kind of intelligence-gathering was to expose it to the public and let the resulting furor do the work his superiors would not.”

[Kevin Gosztola is a writer and documentary filmmaker whose blog, The Dissenter, is posted at FireDogLake.]