It Wasn’t Abortion That Formed the Religious Right. It Was Support for Segregation.

The religious right, who liked to call themselves the "moral majority" at the time, actually organized around fighting to protect Christian schools from being desegregated. 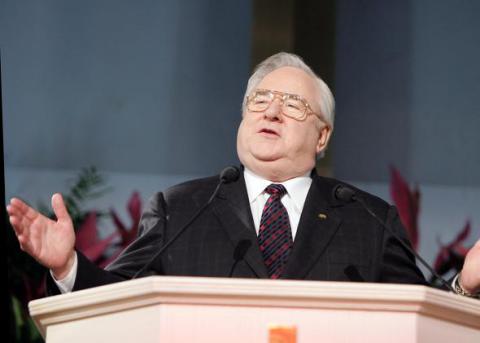 The modern religious right formed, practically overnight, as a rapid response to the Supreme Court's landmark ruling in Roe v. Wade. Or, at least, that's how the story goes. The reality, Randall Balmer, a Dartmouth professor writing for Politico Magazine, says, is actually a little less savory to 21st century Americans: The religious right, who liked to call themselves the "moral majority" at the time, actually organized around fighting to protect Christian schools from being desegregated. It wasn't Roe v. Wade that woke the sleeping dragon of the evangelical vote. It was Green v. Kennedy, a 1970 decision stripping tax-exempt status from "segregation academies"—private Christian schools that were set up in response to Brown v. Board of Education, where the practice of barring black students continued.

As Balmer shows, feelings about Roe v. Wade were mixed in the conservative Christian community in the early 1970s, with quite a few evangelical leaders agreeing with the court that abortion is a private matter. Desegregation, however, was a different issue altogether. Anger about forced desegregation of private schools galvanized conservative Christians. Bob Jones University stalled and resisted admitting black students, forcing the IRS to strip its tax exempt status in 1976, an event that spurred evangelical leaders to action. Jerry Falwell and Paul Weyrich, two conservative activists who had been seeking a way to marshal evangelicals into a Republican voting bloc, pounced. Balmer writes:

Weyrich saw that he had the beginnings of a conservative political movement, which is why, several years into President Jimmy Carter’s term, he and other leaders of the nascent religious right blamed the Democratic president for the IRS actions against segregated schools—even though the policy was mandated by Nixon, and Bob Jones University had lost its tax exemption a year and a day before Carter was inaugurated as president. Falwell, Weyrich and others were undeterred by the niceties of facts. In their determination to elect a conservative, they would do anything to deny a Democrat, even a fellow evangelical like Carter, another term in the White House.

The argument they used to defend school segregation will sound familiar to anyone following the lawsuits against mandatory contraception coverage in health insurance plans or the battles over whether businesses have a right to refuse gay customers: "religious freedom."

So what changed? How did abortion eclipse pro-segregation as the rallying cause of the evangelical right? Balmer argues that Weyrich, in particular, was a sharp enough political thinker to realize that pro-segregation sentiment was enough to get the ball rolling, "but they needed a different issue if they wanted to mobilize evangelical voters on a large scale." They took their new coalition of evangelicals and pointed them in the direction of fighting abortion. The strategy worked. In 1978, religious right leaders got their first victories by pushing the anti-abortion agenda, defeating Democrats in statewide elections in Minnesota and Iowa in campaigns that focused heavily on abortion.

Why were conservative Christians more interested in hearing about the supposed evils of abortion in the late ’70s than in the early ’70s? Balmer suggests that "the spike in legal abortions" after Roe was the shock to their system that made them realize that women really were going to use this new right they’d been granted. There was also a more concentrated effort to put out anti-abortion propaganda that framed the procedure as "murder" and suggested the next step was legal infanticide.

Balmer doesn't mention it, but there was one other shift in the public consciousness going on at the time. The "Stop ERA" campaign, headed up by Christian right leader Phyllis Schlafly to kill the Equal Rights Amendment banning sex discrimination, got moving in 1972. By the time male Christian conservative leaders like Weyrich and Falwell decided to make abortion a centerpiece issue, Schlafly had done the yeoman's work of convincing huge numbers of evangelical Christians that feminists were a threat to the very fabric of society. With hostility to women's equality rising, making the anti-abortion pitch was probably much, much easier.

Balmer notes at the top of his piece that it's common for anti-choicers to compare themselves to abolitionists. Once you know the pro-segregationist history of the religious right, however, it becomes clear that this comparison is not only obnoxious, but offensive.

Amanda Marcotte is a Brooklyn-based writer and DoubleX contributor. She also writes regularly for the Daily Beast, AlterNet, and USA Today. Follow her on Twitter.