Stories from an Occupation: The Israelis who Broke Silence

A group called Breaking the Silence has spent 10 years collecting accounts from Israeli soldiers who served in the Palestinian territories. To mark the milestone, 10 hours' worth of testimony was read to an audience in Tel Aviv. Here we print some extracts.

June 9, 2014 Peter Beaumont in Tel Aviv for The Observer The Guardian / The Observer (UK)
Printer friendly
Stories from an Occupation: The Israelis who Broke Silence Published June 9, 2014 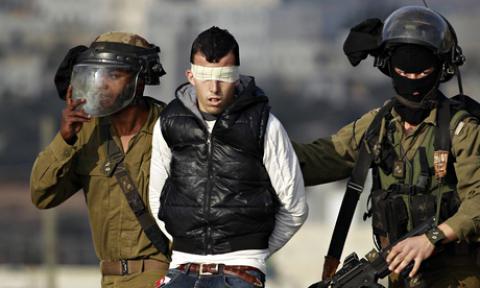 Israeli soldiers arrest a Palestinian after clashes at a protest against a Jewish settlement in the West Bank near Ramallah, January 2014., Mohamad Torokman/Reuters // The Guardian

The young soldier stopped to listen to the man reading on the stage in Tel Aviv's Habima Square, outside the tall façade of Charles Bronfman Auditorium. The reader was Yossi Sarid, a former education and environment minister. His text is the testimony of a soldier in the Israel Defence Forces, one of 350 soldiers, politicians, journalists and activists who on Friday – the anniversary of Israel's occupation of Palestinian land in 1967 – recited first-hand soldiers' accounts for 10 hours straight in Habima Square, all of them collected by the Israeli NGO Breaking the Silence.

When one of the group's researchers approached the soldier, they chatted politely out of earshot and then phone numbers were exchanged. Perhaps in the future this young man will give his own account to join the 950 testimonies collected by Breaking the Silence since it was founded 10 years ago.

In that decade, Breaking the Silence has collected a formidable oral history of Israeli soldiers' highly critical assessments of the world of conflict and occupation. The stories may be specific to Israel and its occupation of the Palestinian territories but they have a wider meaning, providing an invaluable resource that describes not just the nature of Israel's occupation but of how occupying soldiers behave more generally. They describe how abuses come from boredom; from the orders of ambitious officers keen to advance in their careers; or from the institutional demands of occupation itself, which desensitises and dehumanises as it creates a distance from the "other".

In granular detail, the tens of thousands of words narrated on Friday told of the humdrum and the terrible: the humiliating treatment of Palestinians at checkpoints, shootings and random assaults. Over the years the Israeli military's response has been that these stories are the exceptions, not the rule, accounts of a few bad apples' actions.

"What we wanted to show by reading for 10 hours is that the things described in the testimonies we have collected are not exceptional, rather they are unexceptional," says Yehuda Shaul, one of the founders of the group and a former soldier himself.

Shaul breaks off to greet the European Union ambassador and a woman soldier who served in his own unit whom he has not seen for years. We talk about the solitary soldier in the square, now talking to the researcher. "We'll get in contact. See if he wants to talk. Perhaps meet for coffee. Then, when we interview people, we ask them to recommend us to their friends. We might get 10 phone numbers, of whom three will talk to us."

It is not only word of mouth that produces Breaking the Silence's interviews. At the annual conferences that soldiers leaving the army attend to prepare them for the return to civilian life, researchers will try to talk to soldiers outside. Shaul explains why he and his colleagues have dedicated themselves to this project, why he believes it is as necessary today as when he first spoke out a decade ago about his own experience as a soldier in Hebron. "In Israeli politics today the occupation is absent. It's not an issue for the public. It has become normal – not second nature; the occupation has become part of our nature. The object of events like today is for us to occupy the public space with the occupation."

His sentiments are reflected by the Israeli novelist and playwright AB Yehoshua, who gets on the stage to read a comment piece he had written the day before to mark the event. "The great danger to Israeli society," Yehoshua explains, "is the danger of weariness and repression. We no longer have the energy and patience to hear about another act of injustice."

A man appears holding a handwritten sign that condemns Breaking the Silence as "traitors". Some of those attending try to usher him away while others try to engage him in conversation. A journalist asks Shaul if the man is "pro-army". "I'm pro-army," Shaul answers immediately. "I'm not a pacifist, although some of our members have become pacifists. I'm not anti-army, I am anti-occupation."