The French Are Right: Tear Up Public Debt

On the day after the European elections, the committee for a citizen's audit on the public debt issued a 30-page report on French public debt, its origins and evolution in the past decades. The report was written by a group of experts in public finances under the coordination of Michel Husson, one of France's finest critical economists. Its conclusion is straightforward: 60% of French public debt is illegitimate. 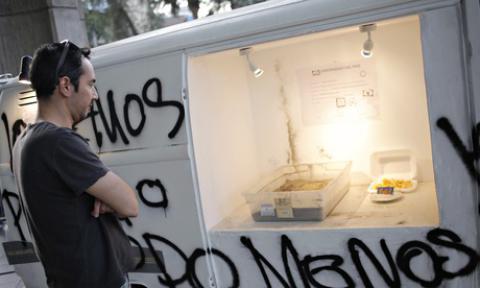 As history has shown, France is capable of the best and the worst, and often in short periods of time.

On the day following Marine Le Pen's Front National victory in the European elections, however, France made a decisive contribution to the reinvention of a radical politics for the 21st century. On that day, the committee for a citizen's audit on the public debt issued a 30-page report on French public debt, its origins and evolution in the past decades. The report was written by a group of experts in public finances under the coordination of Michel Husson, one of France's finest critical economists. Its conclusion is straightforward: 60% of French public debt is illegitimate.

Anyone who has read a newspaper in recent years knows how important debt is to contemporary politics. As David Graeber among others has shown, we live in debtocracies, not democracies. Debt, rather than popular will, is the governing principle of our societies, through the devastating austerity policies implemented in the name of debt reduction. Debt was also a triggering cause of the most innovative social movements in recent years, the Occupy movement.

If it were shown that public debts were somehow illegitimate, that citizens had a right to demand a moratorium – and even the cancellation of part of these debts – the political implications would be huge. It is hard to think of an event that would transform social life as profoundly and rapidly as the emancipation of societies from the constraints of debt. And yet this is precisely what the French report aims to do.

The audit is part of a wider movement of popular debt audits in more than 18 countries. Ecuador and Brazil have had theirs, the former at the initiative of Rafael Correa's government, the latter organised by civil society. European social movements have also put in place debt audits, especially in countries harder hit by the sovereign debt crisis, such as Greece and Spain. In Tunisia, the post-revolutionary government declared the debt taken out during Ben Ali's dictatorship an "odious" debt: one that served to enrich the clique in power, rather than improving the living conditions of the people.

The report on French debt contains several key findings. Primarily, the rise in the state's debt in the past decades cannot be explained by an increase in public spending. The neoliberal argument in favour of austerity policies claims that debt is due to unreasonable public spending levels; that societies in general, and popular classes in particular, live above their means.

This is plain false. In the past 30 years, from 1978 to 2012 more precisely, French public spending has in fact decreased by two GDP points. What, then, explains the rise in public debt? First, a fall in the tax revenues of the state. Massive tax reductions for the wealthy and big corporations have been carried out since 1980. In line with the neoliberal mantra, the purpose of these reductions was to favour investment and employment. Well, unemployment is at its highest today, whereas tax revenues have decreased by five points of GDP.

The second factor is the increase in interest rates, especially in the 1990s. This increase favoured creditors and speculators, to the detriment of debtors. Instead of borrowing on financial markets at prohibitive interest rates, had the state financed itself by appealing to household savings and banks, and borrowed at historically normal rates, the public debt would be inferior to current levels by 29 GDP points.

Tax reductions for the wealthy and interest rates increases are political decisions. What the audit shows is that public deficits do not just grow naturally out of the normal course of social life. They are deliberately inflicted on society by the dominant classes, to legitimise austerity policies that will allow the transfer of value from the working classes to the wealthy ones.A sit-in called by Occupy France at La Défense business district in Paris. Photograph: Afp/AFP/Getty Images

A stunning finding of the report is that no one actually knows who holds the French debt. To finance its debt, the French state, like any other state, issues bonds, which are bought by a set of authorised banks. These banks then sell the bonds on the global financial markets. Who owns these titles is one of the world's best kept secrets. The state pays interests to the holders, so technically it could know who owns them. Yet a legally organised ignorance forbids the disclosure of the identity of the bond holders.

This deliberate organisation of ignorance – agnotology – in neoliberal economies intentionally renders the state powerless, even when it could have the means to know and act. This is what permits tax evasion in its various forms – which last year cost about €50bn to European societies, and €17bn to France alone.

Hence, the audit on the debt concludes, some 60% of the French public debt is illegitimate.

An illegitimate debt is one that grew in the service of private interests, and not the wellbeing of the people. Therefore the French people have a right to demand a moratorium on the payment of the debt, and the cancellation of at least part of it. There is precedent for this: in 2008 Ecuador declared 70% of its debt illegitimate.

The nascent global movement for debt audits may well contain the seeds of a new internationalism – an internationalism for today – in the working classes throughout the world. This is, among other things, a consequence of financialisation. Thus debt audits might provide a fertile ground for renewed forms of international mobilisations and solidarity.

This new internationalism could start with three easy steps.

1) Debt audits in all countries

The crucial point is to demonstrate, as the French audit did, that debt is a political construction, that it doesn't just happen to societies when they supposedly live above their means. This is what justifies calling it illegitimate, and may lead to cancellation procedures. Audits on private debts are also possible, as the Chilean artist Francisco Tapia has recently shown by auditing student loans in an imaginative way.

2) The disclosure of the identity of debt holders

A directory of creditors at national and international levels could be assembled. Not only would such a directory help fight tax evasion, it would also reveal that while the living conditions of the majority are worsening, a small group of individuals and financial institutions has consistently taken advantage of high levels of public indebtedness. Hence, it would reveal the political nature of debt.

3) The socialisation of the banking system

The state should cease to borrow on financial markets, instead financing itself through households and banks at reasonable and controllable interest rates. The banks themselves should be put under the supervision of citizens' committees, hence rendering the audit on the debt permanent. In short, debt should be democratised. This, of course, is the harder part, where elements of socialism are introduced at the very core of the system. Yet, to counter the tyranny of debt on every aspect of our lives, there is no alternative.

• This article was amended on 10 June to say that Greece and Spain had been "harder hit" by the sovereign debt crisis, not "hardly hit".