The decision, which was enthusiastically endorsed by Education Secretary Arne Duncan, brings a close to the first chapter of the case, Vergara v. California, in which a group of student plaintiffs backed by a Silicon Valley millionaire argued that state tenure laws had deprived them of a decent education by leaving bad teachers in place. 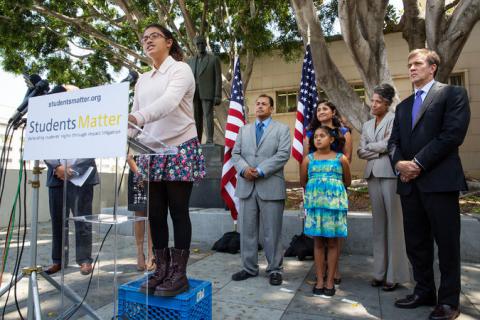 LOS ANGELES — A California judge ruled Tuesday that teacher tenure laws deprive students of their right to an education under the state Constitution and violate their civil rights. The decision hands teachers’ unions a major defeat in a landmark case, one that could radically alter how California teachers are hired and fired and prompt challenges to tenure laws in other states.

“Substantial evidence presented makes it clear to this court that the challenged statutes disproportionately affect poor and/or minority students,” Judge Rolf M. Treu of Los Angeles Superior Court wrote in the ruling. “The evidence is compelling. Indeed, it shocks the conscience.”

The decision, which was enthusiastically endorsed by Education Secretary Arne Duncan, brings a close to the first chapter of the case, Vergara v. California, in which a group of student plaintiffs backed by a Silicon Valley millionaire argued that state tenure laws had deprived them of a decent education by leaving bad teachers in place.Observers on both sides expect the case to generate more like it in cities and states around the country. David Welch, a Silicon Valley technology magnate, spent several million dollars to create the organization that brought the Vergara case to court — Students Matter — and paid for a team of high profile attorneys, including Theodore J. Boutrous Jr., who helped win a Supreme Court decision striking down California’s same-sex marriage ban. While the next move is still unclear, the group is considering filing lawsuits New York, Connecticut, Maryland, Oregon, New Mexico, Idaho and Kansas and other states with powerful unions where legislatures have defeated attempts to change teacher tenure laws.

The teachers’ unions said Tuesday that they planned to appeal. A spokesman for the state’s attorney general, Kamala D. Harris, said she was reviewing the ruling with Gov. Jerry Brown and state education officials before making a decision on any plans for an appeal.

“We believe the judge fell victim to the anti-union, anti-teacher rhetoric and one of America’s finest corporate law firms that set out to scapegoat teachers for the real problems that exist in public education,” said Joshua Pechthalt, the president of the California Federation of Teachers, one of two unions that represent roughly 400,000 educators in the state. “There are real problems in our schools, but this decision in no way helps us move the ball forward.”

In his harshly worded 16-page ruling, Judge Treu compared the Vergara case to the historic desegregation battle of Brown v. Board of Education, saying that the earlier case addressed “a student’s fundamental right to equality of the educational experience,” and this case involved applying that principle to the “quality of the educational experience.”

He agreed with the plaintiffs’ argument that California’s current laws make it impossible to remove the system’s numerous low-performing and incompetent teachers, because the tenure system assures them a job essentially for life; that seniority rules requiring the newest teachers to be laid off first were harmful; and that granting tenure to teachers after only two years on the job was farcical, offering far too little time for a fair assessment of the teacher’s skills.

Further, Judge Treu said, the least effective teachers are disproportionately assigned to schools filled with low-income and minority students. The situation violates those students’ constitutional right to an equal education, he determined. It is the believed to be the first legal opinion to assert that the quality of an education is as important as mere access to schools or sufficient funding.

“All sides to this litigation agree that competent teachers are a critical, if not the most important, component of success of a child’s in-school educational experience,” Judge Treu wrote in his ruling. “There is also no dispute that there are a significant number of grossly ineffective teacher currently active in California classrooms.”

The right to an education is written into every state constitution. But lawyers for the states and teachers’ unions said that overturning such laws would erode necessary protections that stop school administrators from making unfair personnel decisions. They also argued that the vast majority of teachers in the state’s schools are competent and providing students with all the necessary tools to learn. More important factors than teachers, they argued, are social and economic inequalities as well as the funding levels of public schools.

Critics of existing rules hailed the decision as a monumental victory and urged lawmakers to make immediate changes to laws. Mr. Duncan issued a statement saying the ruling could help millions of students who are hurt by existing teacher tenure laws.

“My hope is that today’s decision moves from the courtroom toward a collaborative process in California that is fair, thoughtful, practical and swift,” Mr. Duncan said. “Every state, every school district needs to have that kind of conversation.”

In essence, Judge Treu ruled that a quality education is guaranteed for all students in the state — which relies on effective teachers — and that anything less undermines the quality violates the equal protection clause in the state constitution.

In his ruling, Judge Treu added his voice to the political debate that has divided educators for years. School superintendents in large cities across the country — including Los Angeles, New York and Washington — have railed against laws that essentially grant teachers permanent employment status. They say such job protections are harmful to students and are merely an anachronism. Three states and the District of Columbia have eliminated tenure, but similar efforts have repeatedly failed elsewhere, including California. Under state law here, administrators seeking to dismiss a teacher they deem incompetent must follow a complicated procedure that typically drags on for months, if not years. Teachers are eligible for tenure after 18 months, and layoffs must be determined by seniority, a process known as “last in, first out.”

Judge Treu, who was appointed by former Gov. Pete Wilson, a Republican, wrote that “both students and teachers are unfairly, unnecessarily, and for no legally cognizable reason (let alone a compelling one), disadvantaged by the current Permanent Employment Statute.” He added that current dismissal statutes are “so complex, time consuming and expensive as to make an effective, efficient yet fair dismissal of a grossly ineffective teacher illusory.”

He also had harsh words from the layoff system that protects veteran teachers, without regard to any evaluation. “The logic of this position is unfathomable and therefore constitutionally unsupportable,” he wrote.

Judge Treu is expected to issue a final opinion on the case by the end of the month after taking comments from both sides, but for now ordered that the existing laws remain in place while the case makes its way through the appeal process.

John Deasy, superintendent for the Los Angeles Unified School District, who testified for the plaintiffs, said he hoped the decision would be a rallying cry for an immediate response from state lawmakers, who have been reluctant to make any changes to tenure laws.

“Every day that these laws remain in effect represents another opportunity denied,” he said. He echoed language used in desegregation rulings: “With all deliberate speed.— I don’t think we need to watch for two generations more to fix this.”