Frankenstein Fears His Monster: The Gates Foundation Wants You To Boycott High-Stakes Tests

The Bill & Melinda Gates Foundation issued a stunning announcement on Tuesday, saying that it supports a two-year moratorium on attaching high-stakes to teacher evaluations or student promotion on tests associated with the new Common Core State Standards. 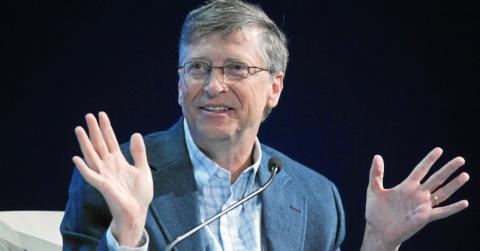 “…the Gates Foundation agrees with those who’ve decided that assessment results should not be taken into account in high-stakes decisions on teacher evaluation or student promotion for the next two years, during this transition.”  — Vicki Phillips, director of the U.S. education program at the Bill & Melinda Gates Foundation

How do you know the United States is currently experiencing the largest revolt against high-stakes standardized testing in history?

Because even the alchemists responsible for concocting the horrific education policies designed to turn teaching and learning into a test score have been shaken hard enough to awaken from the nightmare scenario of fast-tracking high-stakes Common Core testing across the nation. The Bill & Melinda Gates Foundation issued a stunning announcement on Tuesday, saying that it supports a two-year moratorium on attaching high-stakes to teacher evaluations or student promotion on tests associated with the new Common Core State Standards.

Labor journalist Lee Sustar put it perfectly when he said of the Gates Foundation’s statement, “Dr. Frankenstein thought things got out of hand, too.”

The mad-pseudoscientists at the Gates Foundation have been the primary perpetrators of bizarre high-stakes test experiments in teacher evaluations, even as a growing body of research—including a report from the American Statistical Association—has debunked the validity of “value added method” testing models. The Gates Foundation has used its immense wealth to circumvent the democratic process to create the Common Core State Standards (CCSS) with very little input from educators. As Rethinking Schools editor Stan Karp wrote of the Common Core development process:

Because federal law prohibits the federal government from creating national standards and tests, the Common Core project was ostensibly designed as a state effort led by the National Governors Association, the Council of Chief State School Officers, and Achieve, a private consulting firm. The Gates Foundation provided more than $160 million in funding, without which Common Core would not exist… According to teacher educator Nancy Carlsson-Paige: “In all, there were 135 people on the review panels for the Common Core. Not a single one of them was a K–3 classroom teacher or early childhood professional.” Parents were entirely missing. K–12 educators were mostly brought in after the fact to tweak and endorse the standards—and lend legitimacy to the results.

And thus the Gates Foundation’s unnatural methods brought to life the Common Core State Standards. As parents, students, and teachers around the nation have grown tired of being the targets of hazardous corporate experimentation and excluded from major policy decisions about education, they have built the largest revolt against the use of high-stakes standardized testing in our nations’ history. Teachers at my own Garfield High School in Seattle refused to administer the district mandated MAP test last year. This year, teachers at Saucedo Elementary were threatened with the revoking of their teaching certificates for refusing to administer a state exam, but have continued in their civil disobedience. Some 33,000 parents in New York State alone have opted their children out of tests in the current school year. Students from Portland to Rhode Island have led rallies and walkouts against the tests.

The Providence Student Union recently gathered at the Rhode Island Statehouse, dressed as rodents, to protest a state-wide standardized test recently incorporated into high school graduation requirements. Jose Serrano, a sophomore at The Met School, addressed the crowd saying, “The reason we are dressed like guinea pigs and lab rats is simple — that is how we are being treated. (The Rhode Island Department of Education) had a hypothesis — that high-stakes testing alone, without the extra resources our schools need, would solve our educational problems and radically improve our proficiency. But this was nothing more than an experiment.”

So when the Gates Foundation writes that they, “agree with those who’ve decided that assessment results should not be taken into account in high-stakes decisions on teacher evaluation or student promotion for the next two years,” I take that to mean they have sided with our movement and activists like Jia Lee of the Earth School who is refusing to administer a CCSS test. I can only assume the Gates Foundation is getting ready to sign the petition and cut a check to support the group, “Teachers of Conscience,” responsible organizing this Common Core testing boycott.

The Gates Foundation may be attempting to corral a runaway anti-high-stakes testing movement by appearing to listen to the overwhelming numbers of people who are demanding an end to the use of test and punish mysticism in education. But in calling for a two-year dousing of cold water on the high-stakes attached to CCSS tests, the Gates foundation has only poured gasoline on a fire threatening to consume the multi-billion dollar Pearson corporation’s testing products around the nation. Imagine the confidence of the next group of teachers who refuse to administer high-stakes Common Core tests when they justifiably claim the creator of the Common Core doesn’t want them to administer it.

While the Gates Foundation may be bending to the will of a popular revolt, it will take nothing short of mass civil rights movement to defeat its grotesque monster of high-stakes testing that is menacing our schools.

Jesse Hagopian teaches history and is the Black Student Union adviser at Garfield High School, the site of the historic boycott of the MAP standardized test.  Jesse is the editor and contributing author to the forthcoming book, More Than a Score: The New Uprising Against High-Stakes Testing. Jesse an associate editor for Rethinking Schools magazine, a founding member of Social Equality Educators (SEE), and recipient of the 2013 “Secondary School Teacher of Year” award from the Academy of Education Arts and Sciences. Follow Jesse on his blog at www.iamaneducator.com or on Twitter: @jessedhagopian

This work is licensed under a Creative Commons Attribution 3.0 license.