3 Reasons Why U.S. Strikes on Iraq (Again) Are a Terrible Idea

It’s important to understand that the current crisis in Iraq is rooted in the destruction of Iraqi society brought on by the U.S. invasion and occupation. 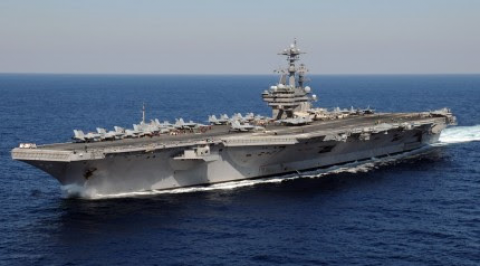 The U.S. war machine is on the move. Oh, the tragic irony – the George H.W. Bush warship moves into the Persian Gulf, poised to take military action as the situation in Iraq deteriorates.

Calls for U.S. intervention grow louder. On one side we have the voices from the right, those who favor militarism and war over diplomacy (and who got us into this mess in the first place). Then there are those individuals, some liberals and progressives, who are genuinely concerned about the welfare of Iraqis and who may be confused about how to respond.

It’s important to understand that the current crisis in Iraq is rooted in the destruction of Iraqi society brought on by the U.S. invasion and occupation. By exacerbating differences between Sunnis and Shiites, U.S. policies pushed Iraq away from a secular government and society.

As President Barack Obama weighs U.S. options, we are once again called upon to raise our voices and say no to military intervention. Here are three reasons why.

1. Bombs will make the situation worse. You can’t help people caught in a civil war by dropping bombs on them or using drones. Sending in arms or troops will only deepen the major social, ethnic, religious and political divisions in Iraq and the wider region. A military response on the part of Washington will surely escalate the conflict, with innocent civilians caught in the crossfire. Nearly 500,000 Iraqi people have died from the war and war-related causes to date. Enough is enough.

Besides, as prominent essayist Juan Cole points out, “The Sunni radicals are not a conventional army. There are no lines for the US to bomb, few convoys or other obvious targets. To the extent that their advance is a series of urban revolts against the government of PM Nouri al-Maliki, the US would end up bombing ordinary city folk.”

To bomb Sunni towns could spark an all-out sectarian war if it were seen as enabling the Shiite government of Maliki to stay in power without making concessions to the Sunni minority that has suffered abuse under the post-war Iraqi government. Attempts by the U.S. or other major powers to intervene unilaterally or to impose external military solutions will likely backfire and inflame militant extremism.

Moreover, a Washington-imposed military solution will heighten the numbers of deaths and casualties as well as the displacement of hundreds of thousands of men, women and children throughout Iraq and the region as a whole. There are already a million refugees in Jordan, Turkey, and Lebanon from the civil war in neighboring Syria. And major destruction looms heavy if Iran intervenes and draws in Israel with its stockpile of nuclear weapons.

2. More war is no way to honor U.S. soldiers. Some 4500 U.S. troops have been killed in Iraq and over 32,000 wounded (the official figure) but the casualties are much higher when you add in the hundreds of thousands of U.S. vets with traumatic brain injuries, those suffering from PTSD and victims of military sexual trauma. These are the stats behind the high rates of veteran suicides – estimated at 18 per day with the overall number higher than the number of troops who died in the war. All this for the projected cost of 2 - 3 trillion dollars out of the national budget - our tax dollars - which has meant major cuts to vital services like education, health care, housing, etc. here at home. And that includes cuts to services and programs for returning vets and their families.

The right-wing is using veterans to fuel a hawkish agenda. They claim vets must be honored by intervening once again in Iraq and not losing the so-called ‘gains’ of the war. But what were those gains? What the U.S. learned from the war was that military occupation cannot bring about democracy. If we truly want to “honor the sacrifice” of our veterans, we would take care of them in civilian society, ensuring they have the mental and physical care they deserve as well as re-entry assistance. Nor would we redeploy them into another quagmire.

3. Iraq needs reconciliation and reconstruction, not reintervention and the rebooting of war. The country has been through decades of war and has been torn apart by an occupation that has worsened sectarian divisions. As Former Peace Action Executive Director David Cortright pointed out, “Any lasting solution has to be regional in nature and must address the political interests of all the major factions in an equitable and inclusive manner. This crisis increasingly poses threats to global security and requires a multilateral diplomatic response. The United States should work through the United Nations (and the Arab League if possible) to propose and support a major global diplomatic initiative.”

Ross Caputi writing in Common Dreams sums it up, “These fractured communities within Iraq must decide their own future, without the interference of Washington or Tehran. Most importantly for us, as Americans, we must make an effort to analyze this issue outside of the paradigm of US political thought and try to see this issue through the eyes of those most affected by it. We must respect their ideas and values, their politics and culture, and their right to determine their own future, unimpeded by foreign interference.”

[Felicia Gustin has been with War Times since the beginning. She currently works at SpeakOut, a national organization working primarily with colleges, universities, and high schools and dedicated to the advancement of education, racial and social justice, leadership development and activism. Felicia is also on the Board of Directors of Destiny Arts Center, a violence prevention/arts education organization for young people in Oakland CA.]