"We don't throw around the threat of litigation or protests lightly," said the Haida Nation president. "This is the time we will take the biggest stand of our lives." 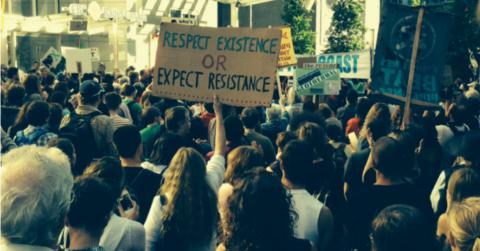 Demonstrators took to the streets of Vancouver Tuesday evening after the Canadian government gave the greenlight to the Northern Gateway tar sands pipeline., Brent Patterson/ Twitter

Twenty-eight individual First Nation bands and three Aboriginal organizations have signed to a letter announcing its intention to fight the Enbridge Northern Gateway pipeline proposal through legal battles. The federal government approved the project today, despite heavy opposition from BC.

"I've never seen a list of First Nations like that," Haida Nation president Peter Lantin (Kil tlaats’gaa) said, speaking of the number of First Nations signed on to challenge the Northern Gateway pipeline in court.

He said a broad collaboration was taking place between First Nations and environmental groups, and said non-Aboriginal people were supporting them in their opposition to the pipeline.

A way of life, threatened

Lantin said he and other Aboriginal groups would take every measure necessary to oppose the pipeline, because of the extreme threats that oil tankers posed to people's way of living off the land.

"It's scary that the announcement came at this time. Right now, we're on the cusp of harvesting season here in Haida Gwaii. So any day of the week now, you see people fishing, you see them clam-digging, collecting berries. It's not something people here do 'just because' -- it's a way of life you're putting at risk here, what we do on a daily basis," he said.

"We're a water people. Literally, everything we do is being threatened. The risks of putting tankers through Haida territory are too great."

'The biggest stand of our life'

Although Enbridge executives Janet Holder and John Carruthers told reporters repeatedly today that the company would continue working with First Nations, Lantin said his people were opposed the concept of Northern Gateway since 2005 and not interested in signing on.

"This has all come about because of the inability of Enbridge  to accept 'no' for an answer," he said. In 2012, a consultant for Enbridge at an oil and gas conference in Vancouver warned that there was a "long list of dead lawyers who have fought against Aboriginal rights and title" and lost.

Lantin said proponents of the pipeline were in for a difficult battle in court.

"We don't throw around the threat of litigation or protests lightly," Lantin said. "This is the time we will take the biggest stand of our lives."

Asked if civil disobedience was also on the table, Lantin paused for a moment, before responding:

The announcement from the 31 First Nations reads (excerpts):

“First Nations will immediately go to court to vigorously pursue all lawful means to stop the Enbridge project.”

"We have governed our lands, in accordance to our Indigenous laws, since time immemorial. Our inherent Title and Rights and our legal authority over our respective territories have never been surrendered," the group of First Nations said in a news release.

"This project, and the federal process to approve it, violated our rights and our laws. We are uniting to defend our lands and waters of our respective territories. Our rights and laws compel us to act. We will defend our territories whatever the costs may be."

The letter was signed by the following groups:

Council of the Haida Nation

Office of the Wet'suwet'en

BC Assembly of First Nations

Union of BC Indian Chiefs