Picture the World as a Desert

Some activists say the World Bank itself is partly to blame for the conjoined problems of climate change, food insecurity and desertification, by pushing its agenda of large-scale agriculture and mono-crop plantations on the developing world. 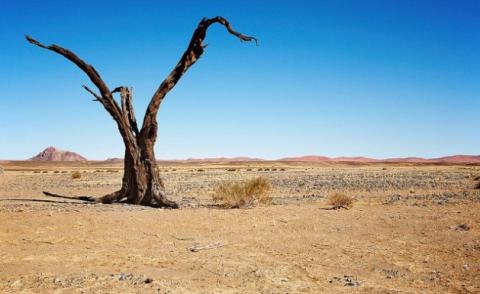 Two billion hectares of land are badly degraded as a result of desertification. , Bigstock/IPS

UNITED NATIONS, Jun 17 2014 (IPS) - Try to imagine an expanse of barren land, stretching for miles, with no trace of greenery, not a single bough to cast a sliver of shade, or a trickle of water to moisten the parched earth. Now imagine that desert expanding by 12 million hectares a year. Why? Because it’s already happening.

Studies show that 24 billion tons of fertile soils are being eroded each year, while two billion hectares of land are badly degraded as a result of desertification. Dry lands in sub-Saharan Africa alone are set to increase by 15 percent in the next decade.

Globally, some 1.5 billion people stand on the edge of an arid precipice, their lands, lives and livelihoods threatened by an encroaching dust bowl.

It is against this backdrop that the United Nations marks the World Day to Combat Desertification (WDCD), complete with sombre warnings from some of its highest-level officials.

“With the world population rising, it is urgent we work to build the resilience of all productive land resources and the communities that depend on them,” U.N. chief Ban Ki-moon stressed in a message delivered from Bonn, Germany, Tuesday.

The Food and Agriculture Organisation (FAO) is predicting a 50-percent increase in demand for food by 2050, even while scientists warn that yields of major crops like wheat, rice and maize could decline by 20 percent in the coming decade due to hotter temperatures.

Scarcities of staple products could lead to the absorption of more land for industrialised agriculture, which has proven itself to be a major driver of global warming, directly accounting for 15 to 30 percent of carbon and methane emissions worldwide, which in turn feed desertification.

Red-flagging these many converging and interconnected crises, the United Nations Convention to Combat Desertification (UNCCD) assigned WDCD 2014 the theme ‘Land Belongs to the Future – Let’s Climate Proof it.’

Thirty-five percent of the earth’s surface is comprised of drylands, including savannahs, scrublands and dry forests, which collectively sequester 36 percent of the world’s carbon stocks and support 50 percent of all livestock.

These naturally occurring drylands provide excellent examples for regenerating or remediating degraded soil and have inspired a solution to desertification known as ecosystem-based adaptation, which aims to “strengthen natural systems to cushion the worst impacts of climate change.”

“A good example of ecosystem-based adaptation can be seen in Niger, where farmer-managed natural regeneration has brought back five million hectares of land,” Louise Baker, senior adviser on partnership building and resource mobilisation with the UNCCD, told IPS.

“Small changes in land use techniques – such as terracing, or the installation of water harvesting tanks – can make a big difference to the land a person owns and works,” she added.

While the Bank’s officials have called repeatedly for increased investment and financing to tackle climate change and build resilience to future shocks, UNCCD’s Baker believes that simple realignment of existing funds and land management techniques could play an even bigger role.

“Soil alone could help sequester up to three billion tons of carbon a year, representing up to a third of potential mitigation capacity that can be achieved by simply changing how we manage the land and soil,” she told IPS.

“There are approximately two billion hectares of degraded land around the world with the capacity to be brought back, and about 480 million hectares of abandoned agricultural land that could be returned to production – not through additional investment but a realignment of priorities.

“For instance, investment in fertiliser use may be important; but if we invested instead in incentives to improve sustainable land management we would be able to get carbon back into the soil and help populations become more resilient to climate change rather than rely on fertilised production.

“It’s a matter of realigning funding flows so that you power adaptation by nature, rather than try and buy it,” she concluded.

“After that it’s up to governments and larger land owners to connect those dots and create a mosaic of land uses that, together, constitute quite a resilient package.”

At a ceremony held at the World Bank headquarters in Washington DC Tuesday, the UNCCD awarded its prestigious Land for Life Award to two organisations working to combat desertification through ecosystem adaptation in local communities.

And in Mongolia – 78 percent of which is affected by desertification – the Green Asia Network (GAN) has mobilised its 25,000-strong volunteer army to plant trees all across the arid landscape. Climate refugees who once left Mongolia’s desertified regions have returned as GAN volunteers to a place they scarcely recognise beneath its newfound greenery.

Scores of people gathered at the World Bank to recognise the achievements of these dedicated individuals and press for similar action at the international level.

But some activists say the World Bank itself is partly to blame for the conjoined problems of climate change, food insecurity and desertification, by pushing its agenda of large-scale agriculture and mono-crop plantations on the developing world.

A campaign called ‘Our Land, Our Business’, launched jointly by the Oakland Institute (OI) together with a host of NGOs and farmer organisations from around the world, seeks to “hold the World Bank accountable for its role in the rampant theft of land and resources from some of the world’s poorest people – farmers, pastoralists, and indigenous communities, who are currently feeding 80 percent of the developing world,” according to a Mar. 31 press release.

The advocacy groups blame the Bank’s ‘Doing Business’ rankings – scored according to Washington officials’ opinions on how “easy” it is to work in a certain country – for forcing heads of developing states to relax environmental regulations, violate labour laws and deregulate their economies in the hope of attracting foreign investment.

And investment in the global South, according to OI’s policy director Frederic Mousseau, “is mostly about agriculture and the extraction of natural resources.”

“Thanks to reforms and policies guided by the Bank,” charged OI, “Sierra Leone has taken 20 percent of its arable land from rural populations and leased it to foreign sugar cane and palm oil producers.

“And in Liberia, British, Malaysian, and Indonesian palm-oil giants have secured long-term leases for over 1.5 million acres of land formerly held by local communities,” the organisation added.

“These policies are the exact opposite of what we need to combat desertification,” Mousseau told IPS, “which can only be achieved through diversification of agriculture, afro-forestry, inter-cropping, and other techniques practiced by small farmers.”

“In Mali, for instance, small farmers living around the Niger River are seeking government support to practice traditional agriculture on the riverbank. Instead the government has given 500,000 hectares of the most fertile land to 22 foreign and domestic investors for the production of agro-fuels and mono-crops,” he added.

“This is a country where the World Bank has been very active, implementing policies that benefit foreign investors while eating up Mali’s resources.”

Until these policies are dealt with on a macro-level, local efforts at adaptation and mitigation do not stand much of a chance at success.