The Bush administration presided over the rise of precisely what it had said was one of the key goals of the Iraq War to destroy: a safe haven for al Qaeda in the heart of the Arab world. 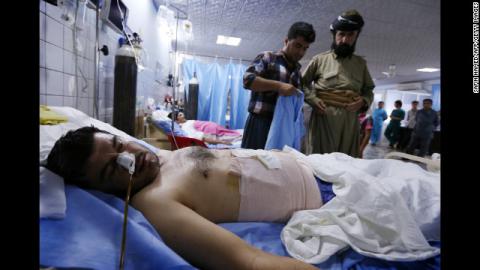 A Kurdish Peshmerga fighter injured in clashes with members of ISIS lies in a hospital in Irbil on June 18.,

(CNN) -- ISIS, the brutal insurgent/terrorist group formerly known as al Qaeda in Iraq, has seized much of western and northern Iraq and even threatens towns not far from Baghdad.

From where did ISIS spring? One of George W. Bush's most toxic legacies is the introduction of al Qaeda into Iraq, which is the ISIS mother ship.

If this wasn't so tragic it would be supremely ironic, because before the U.S. invasion of Iraq in 2003, top Bush officials were insisting that there was an al Qaeda-Iraq axis of evil. Their claims that Saddam Hussein's men were training members of al Qaeda how to make weapons of mass destruction seemed to be one of the most compelling rationales for the impending war.

After the fall of Hussein's regime, no documents were unearthed in Iraq proving the Hussein-al Qaeda axis despite the fact that, like other totalitarian regimes, Hussein's government kept massive and meticulous records.

The U.S. Defense Intelligence Agency had by 2006 translated 34 million pages of documents from Hussein's Iraq and found there was nothing to substantiate a "partnership" between Hussein and al Qaeda.

Two years later the Pentagon's own internal think tank, the Institute for Defense Analyses, concluded after examining 600,000 Hussein-era documents and several thousand hours of his regime's audio- and videotapes that there was no "smoking gun (i.e. direct connection between Hussein's Iraq and al Qaeda.)"

The Senate Select Committee on Intelligence concluded in 2008, as every other investigation had before, that there was no "cooperative relationship" between Hussein and al Qaeda. The committee also found that "most of the contacts cited between Iraq and al Qaeda before the war by the intelligence community and policy makers have been determined not to have occurred."

Instead of interrupting a budding relationship between Hussein and al Qaeda, the Iraq War precipitated the arrival of al Qaeda into Iraq. Although the Bush administration tended to gloss over the fact, al Qaeda only formally established itself in Iraq a year and a half after the U.S. invasion.

On October 17, 2004, its brutal leader Abu Musab al-Zarqawi issued an online statement pledging allegiance to Osama bin Laden. Zarqawi's pledge was fulsome: "By God, O sheikh of the Mujahideen, if you bid us plunge into the ocean, we would follow you. If you ordered it so, we would obey."

Zarqawi's special demonic genius was to launch Iraq down the road to civil war. In early 2004, the U.S. military intercepted a letter from Zarqawi to bin Laden in which he proposed provoking a civil war between Sunnis and Shia.

Zarqawi's strategy was to hit the Shia so they would in turn strike the Sunnis, so precipitating a vicious circle of violence in which al Qaeda would be cast as the protector of the Sunnis against the wrath of the Shia. It was a strategy that worked all too well, provoking first sectarian conflict in Iraq and later civil war.

Al Qaeda in Iraq, or AQI, regularly attacked Shia religious processions, shrines and clerics. The tipping point in the slide toward full-blown civil war was al Qaeda's February 2006 attack on the Golden Mosque in Samarra, which is arguably the most important Shia shrine in the world.

Three years into the Iraq War, AQI seemed all but unstoppable. A classified Marine intelligence assessment dated August 17, 2006, found that AQI had become the de facto government of the western Iraqi province of Anbar, which is strategically important because it borders Jordan, Syria and Saudi Arabia and makes up about a third of the landmass of Iraq.

In addition, AQI controlled a good chunk of the exurban belts around Baghdad, the "Triangle of Death" to the south of the capital and many of the towns north of it, up the Tigris River to the Syrian border.

Thus AQI controlled territory larger than New England and maintained an iron grip on much of the Sunni population.

In other words, the Bush administration had presided over the rise of precisely what it had said was one of the key goals of the Iraq War to destroy: a safe haven for al Qaeda in the heart of the Arab world.

By 2007, al Qaeda's untrammeled violence and imposition of Taliban ideology on the Sunni population provoked a countrywide Sunni backlash against AQI that took the form of Sunni "Awakening" militias. Many of those militias were put on Uncle Sam's payroll in a program known as the "Sons of Iraq".

The combination of the Sunni militias' on-the-ground intelligence about their onetime AQI allies and American firepower proved devastating to al Qaeda's Iraqi franchise. And so, between 2006 and 2008, AQI shrank from an insurgent organization that controlled territory larger than the size of New England to a rump terrorist group.

But AQI did not disappear. It simply bided its time. The Syrian civil war provided a staging point over the past three years for its resurrection and transformation into the "Islamic State of Iraq and Syria," or ISIS. And now ISIS has marched back into western and northern Iraq. Only this time there is no U.S. military to stop it.

Peter Bergen is CNN's national security analyst, a director at the New America Foundation and the author of ""The Longest War: The Enduring Conflict between America and Al-Qaeda," which this story draws upon.