Enforcement is not the solution to the latest version of the United States’ immigration issue. To stem immigration, if that’s indeed what is desired, the United States needs to make Central America habitable again, especially since the U.S. government has been the major instigator in the region for at least the past century. 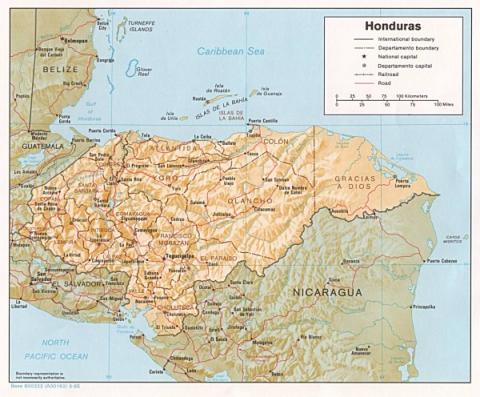 When a coup removed the democratically-elected leftist president of Honduras in June 2009, receiving tacit support from the U.S. State Department, the American people barely took notice. Then when the United States increased military funding in its little protectorate to reinforce the new right-wing regime installed there, the American public still remained largely unaware and unconcerned. Even after it was reported that Honduras had become “the most dangerous country in the world” a year after the coup (it still is), and that a campaign against drug cartels in Mexico had made Honduras a major distribution point for drugs making their way from South American producers to American consumers, Americans couldn’t be bothered.

They focused all of their attention on Mexico, and their tunnel vision is somewhat understandable. The United States and Mexico share a long, porous border, and Americans have been worried about the violence in Mexico being exported to the United States—though looking at cities like Chicago, it’s hard to argue that it hasn’t already. In addition, considering Mexico is the second largest country in Latin America, with Mexicans making up the largest slice of immigrants in the United States, it seems only natural that the average American would view the topic of immigration as “a Mexico thing.”

But now that child migrants from Honduras and other Central American countries have begun appearing on America’s doorstep, the formerly negligible crises in the region has suddenly been upgraded to an “urgent humanitarian situation” by President Barack Obama.

I guess it’s true what they say, “All politics is local.”

For the past few weeks, the immigration debate in the United States has almost completely shifted to talk of child migrants making the dangerous journey from Guatemala, El Salvador and Honduras to the U.S.-Mexico border, ever since President Obama released a presidential memo on June 2 asking Congress for an additional $1.4 billion in federal funds to address the issue. He even tasked the Federal Emergency Management Agency to deal with the problem.

Cecilia Muñoz, Obama’s director of domestic policy, revealed that the number of child migrants traveling alone has been on the rise since 2009, and Border Patrol reports that “the apprehension of Unaccompanied Alien Children from Central America” has increased by 92 percent from last year, with the largest number of children coming from Honduras. Already over 13,000 Honduran children have been caught at the border this year, a far cry from the 968 apprehended in 2009. And this year’s figure is already twice as high as the number of Honduran children caught at the U.S. border in all of 2013.

Controversy surrounds possible reasons for the recent “surge,” as the government refers to it. Some believe Central Americans are under the false impression that child migrants who make it to U.S. soil are granted some sort of amnesty. More than a few of Obama’s critics accuse the president of fueling this belief through lax enforcement of U.S. immigration laws.

To undo America’s image as a “golden door,” personalities as seemingly diverse as the Congressional Republicans and soon-to-be presidential hopeful Hillary Clinton demand the Obama administration send a clear message to the people of Central America that migrants of any age caught at the U.S. border will be sent back to their home countries. Vice President Joe Biden has been sent to Guatemala to meet with Central American leaders and relay the message. In this way the U.S. government hopes its unwelcoming stance will deter would-be migrants.

But what’s clear for anyone following the situation in Central America is that these children need no other motivation to travel thousands of miles, walk through a searing desert and face all kinds of human dangers than the already hellish conditions in their home countries, conditions supported and oftentimes designed by the very same government now trying to remedy an “urgent humanitarian situation.”

Since its early years the United States has sought to dominate Central America rather than empower it, as evidenced by policies such as the Monroe Doctrine and its Roosevelt Corollary, the deceptive “Good Neighbor” policy that left harsh dictatorships virtually unmolested, the Kennedy Doctrine that sought to combat socialism in Latin America at any cost, the Reagan Doctrine took things up a notch and the concurrent wars on terrorism and drugs in Latin America. In fact, the history of U.S. imperialistic policy in Latin America is so shameful, you’d be hard-pressed to point to one position or action taken in the region that benefited the people of Latin America. In any case, the net result of U.S. foreign policy in Latin America, especially in Central America, is overwhelmingly negative.

The U.S. government’s primary objective in Honduras, as with the rest of Latin America, has never been to establish a safe and prosperous society for its citizens. The Honduran government has simply been a proxy for U.S. business interests, first the United Fruit Company, and now the U.S. military-industrial complex. And because Washington’s game plan has been so successful in Honduras, we have our glimpse at what could be in store for Central America and beyond. Order and peace is desired by policymakers insofar as it creates an environment for the U.S. government and the governments it controls can impose neoliberal policies on the region and extract wealth.

It’s no surprise then that Honduras, the original banana republic, and the poster child for U.S. meddling run amok, should today be the country of origin for the greatest number of child migrants. The United States’ vampirish policy toward Honduras has drained that country.

As well as implementing a foreign policy that has forged the kind of Central America we see today —impoverished and unstable, with weak systems ill-equipped to resurrect themselves. U.S. drug consumption and the U.S. war on drugs have created both high demand and a black market for illegal narcotics, making the production, distribution and sale of drugs a lucrative enterprise. So lucrative, in fact, that in a region offering its citizens no other route out of extreme poverty, many have deemed it worth killing for.

Enforcement is not the solution to the latest version of the United States’ immigration issue. To stem immigration, if that’s indeed what is desired, the United States needs to make Central America habitable again, especially since the U.S. government has been the major instigator in the region for at least the past century. The Obama administration and future presidential administrations must recognize the socioeconomics behind the child migrant crisis. Washington has to realize that it can no longer fund right-wing regimes to combat criminal groups like Mara Salvatrucha and Barrio 18, when doing so only endorses the kind of neoliberal policies in those countries that foster further poverty and despair, thus leading many to join gangs in the first place.

What Honduran parents want for their children is what any parent wants for their child, which is merely the opportunity to build a decent life that is healthy and secure. The child migrants traveling to the U.S. border aren’t making the journey with dreams of buying mansions and sports cars once they get here. They come just as millions of other immigrants have come since the nation’s founding: “tired” and “poor.” They are “the homeless,” the “tempest-tost,” the “huddled masses yearning to breathe free.”

There was a time when America extended her hand to people like that, no matter where they were. Now we’re withdrawing that hand just when child migrants are so desperate to come here, and even though we’ve made them that way.

Hector Luis Alamo, Jr. is a Chicago-based writer. You can connect with him @HectorLuisAlamo.