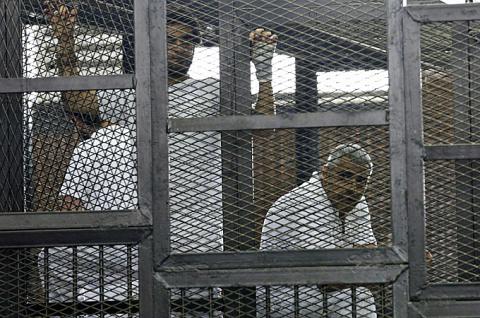 The verdict has raised fears of growing media restrictions in Egypt, Reuters

An Egypt court has sentenced two Al Jazeera journalists to seven years in jail and one to 10 years, triggering international outrage and condemnation of what many described as an "unjust verdict".

The guilty verdicts were announced by a judge on Monday against Peter Greste, Mohamed Fahmy, and Baher Mohamed.

Other Al Jazeera journalists who were tried in absentia, including Sue Turton and Dominic Kane, were sentenced to 10 years.

Greste, Fahmy, and Mohamed were arrested in December in Cairo as they covered the aftermath of the army's removal of Mohamed Morsi from the presidency in July.

The Brotherhood, which supported Morsi, was listed as a "terrorist" organisation by the interim Egyptian government shortly before the accused were arrested.

The prosecution produced a number of items as evidence including a BBC podcast, a news report made while none of the accused were in Egypt, a pop video by the Australian singer Gotye, and several recordings on non-Egyptian issues.

The defence maintained that the journalists were wrongly arrested and that the prosecution had failed to prove any of the charges.

Al Jazeera has strenuously rejected the charges against its journalists and maintains their innocence.

"Today three colleagues and friends were sentenced, and will continue to be kept behind bars for doing a brilliant job of being great journalists. 'Guilty' of covering stories with great skill and integrity. 'Guilty' of defending people’s right to know what is going on in their world," Anstey said in a statement.

"Peter, Mohamed, and Baher and six of our other colleagues were sentenced despite the fact that not a shred of evidence was found to support the extraordinary and false charges against them. At no point during the long drawn out 'trial' did the absurd allegations stand up to scrutiny.

"There is only one sensible outcome now - for the verdict to be overturned, and justice to be recognised by Egypt."

Australia expressed shock and US Secretary of State John Kerry spoke of "a chilling and draconian sentence", while the White House urged President Abdel Fattah al-Sisi to pardon the journalists involved.

"We call on the Egyptian government to pardon these individuals or commute their sentences so that they can be released immediately and (to) grant clemency for all politically motivated sentences," said White House spokesman Josh Earnest.

UN rights chief Navi Pillay said journalism "is not a crime" and urged Egypt to "promptly release" those jailed for doing their job.

Australian Foreign Minister Julie Bishop said: "We are deeply dismayed that a sentence has been imposed and appalled at the severity of it."

"It is hard to credit that the court in this case could have reached this conclusion," she said, adding Canberra would look at possible intervention in the case.

"It is definitely not what we were expecting. I was hoping for acquittal... we will continue to fight for his freedom," he said.

Several countries announced plans to summon Egyptian ambassadors to protest what many called an unjust verdict.