The furor in Murrieta illustrated the conflict between protecting the borders and the safety of immigrant families and children. "If these children were from Canada, we would not be having this interview," immigration rights advocate Enrique Morones told CNN. 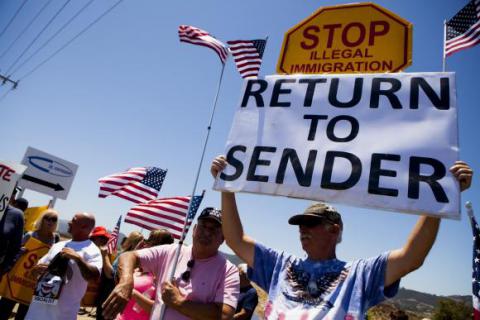 Demonstrators picket against the possible arrivals of undocumented migrants who may be processed at the Murrieta Border Patrol Station in Murrieta, California July 1, 2014. , Credit: Reuters/Sam Hodgson

(CNN) -- A wall of angry protesters blocked three buses of undocumented immigrants in Southern California, forcing them to turn around -- but with no clear final destination.

The immigrants had traveled from South Texas to San Diego and were on their way to be processed at the Murrieta Border Patrol station when the standoff took place Tuesday.

Protesters chanting "USA!" "Impeach Obama!" and "Deport! Deport!" blocked their route. A heated yelling match ensued between the demonstrators and a group of counterprotesters.

After the buses turned around, the 140 people on board were taken to a border station in San Ysidro, said Ron Zermeno of the National Border Patrol Council.

On Wednesday, Zermeno told CNN that at least 136 immigrants were fed and screened. Ten children among the group were taken to local hospitals, though it's unclear why. Seven children were diagnosed with active scabies, an itchy and highly contagious skin disease. Those children are being kept separate from the others at the San Ysidro station, he said.

The U.S. government is struggling to process and accommodate an influx of undocumented immigrants, and specifically a spike in immigrant children. The government doesn't have enough beds, food or sanitary facilities.

Authorities estimate 60,000 to 80,000 children without parents will cross the border this year in what the White House has called an "immediate humanitarian crisis."

To help relieve crowded facilities in Texas, undocumented immigrants are now being sent elsewhere to be processed.

But Zermeno said processing immigrants, rather than enforcing the borders, is only making the situation worse.

"My concern is they are going to be eating in the same holding cells as someone sitting 5 feet away using the bathroom," he said.

Murrieta Police Chief Sean Hadden said he was told to expect 140 immigrants every 72 hours, with the next group scheduled to arrive on Friday, the Fourth of July. He encouraged the public to attend a town hall meeting Wednesday evening.

The furor in Murrieta illustrated the conflict between protecting the borders and the safety of immigrant families and children.

"If these children were from Canada, we would not be having this interview," immigration rights advocate Enrique Morones told CNN.

"The parents have had enough. They are saying, 'If I don't send my child north, they are going to die.'"

The mayor of Murrieta, Alan Long, had urged residents Monday to protest the decision to move undocumented immigrants to the area, the Los Angeles Times reported.

He spoke again Tuesday at a Murrieta City Council meeting, thanking police and others.

"Please remember these are human beings that are fleeing the violence in their home countries," Long said. "The problem is that they need to come into this country the legal way."

Protester Ellen Meeks said the country's identity has eroded with an influx of undocumented immigrants.

"I just wish America would be America again because it's not, and it's not just pointed to the Hispanics," Meeks said. "Everybody needs to go through the legal ways."