CPS has Libraries-But Where are the Librarians? 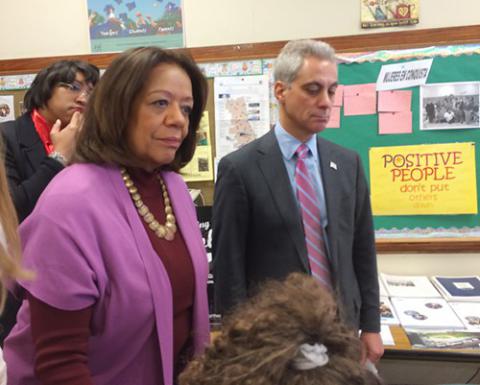 I was reading a collection of Kurt Vonnegut's letters—great book, by the way—when I came across a missive from February of 1983 that sort of sums up Mayor Rahm Emanuel's curious attitude toward libraries.

No, Uncle Kurt wasn't writing to Rahm, who was all of 23 back then and just getting started in the political business. His letter was to Charles Ray Ewick, an official with the Indiana State Library.

Apparently the state of Indiana was so broke it couldn't afford to buy books for its libraries, so Ewick had one of his staffers write a letter to Vonnegut—who grew up in Indianapolis—asking if he'd be so kind as to donate a copy of Deadeye Dick, his latest novel.

To which Vonnegut replied:

"I have complied with this request. Since books are to libraries what asphalt is to highway departments, I assume that Indiana is also asking donations from suppliers of asphalt for her roads. Or has it been decided that asphalt is worth good money, and that books are not?"

I love that letter on so many levels. Not the least of which is that it gets at the curious attitude officials—then and now—seem to have toward books and libraries.

On the one had, they know that books and libraries are like broccoli: you're supposed to like them, even if you don't.

On the other hand, they're definitely the last thing you want to have to pay for.

In Mayor Emanuel's case, he loves libraries—or at least he loves using them as backdrops for his press conferences.

But he clearly doesn't want to spend the money to hire librarians to run the libraries.

At the moment, roughly half of the 400 or so schools in CPS have librarians, according to CPS records.

In addition, only 30 or so of the 50 receiving schools have them. These are the schools in low-income neighborhoods that took in students from other nearby schools that the mayor shuttered last year.

When he closed the schools, Mayor Emanuel promised he'd use the savings to outfit the receiving schools with the best amenities on earth—just like people get in Wilmette, his hometown.

So instead of thinking of the closings as cuts, he wanted us all to think of them as increased educational opportunities.

A concept straight out of Orwell, speaking of great novelists.

Well, here we are over one year later and several librarians felt compelled to show up to last month's board of education meeting to beg and plead that CPS fill its library vacancies.

After their testimony, Barbara Byrd-Bennett, the mayor's hand-picked CEO, explained that she would fill those vacancies—if only there weren't a shortage of certified librarians.

“It’s not that we don’t want to have librarians in libraries," Byrd-Bennett said. "But the pool is diminished." She also said CPS was working with universities to find librarians.

Well, Ms. Byrd-Bennett, let me be of service. If you're looking for a librarian, you can start by going to Payton high school, where the old librarian is teaching Spanish.

That's because the principal, when cutting the budget, had to decide—hmm, what goes first, the librarian or the Spanish teacher?

And there's the rub: there's no money in Mayor Emanuel's school system for both librarians and Spanish teachers. At least not at Payton.

But just to double check, I called Marci Merola, an official with the American Library Association, which happens to be located right here in Chicago.

"If Barbara Byrd-Bennett is looking for certified librarians, I can send her a bunch of resumes of librarians who are looking for jobs," Merola said. "There are many universities graduating librarians every year."

So there you have it Ms. Byrd-Bennett—call Marci! You can find her number in the book.

One last thing about Vonnegut's letter to the Indiana State Library. In conclusion, he wrote:

"If you have a cost accountant, he can easily prove to you that [your aide's] letter to me cost far more than one copy of Deadeye Dick. If you reply to this letter, and you discuss its contents with others on State time, the cost to the taxpayers will soon exceed the retail price of my collected works bound in the finest leather."

Similarly, Mayor Emanuel spent well over $200 million to close all those schools in the name of saving money, and he still can't find the money to hire some librarians.